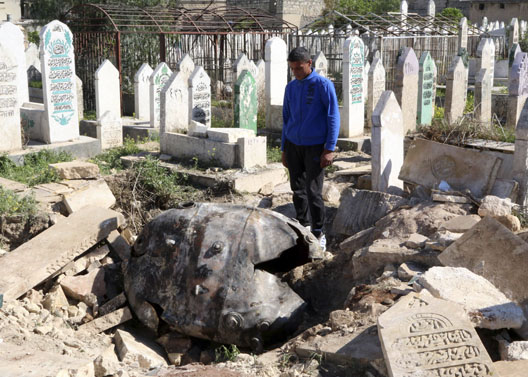 A man looks down at an unexploded barrel bomb dropped by forces loyal to Syria's President Bashar al-Assad at a cemetery in the al-Qatanah neighbourhood of Aleppo March 27, 2014. REUTERS/Mahmoud Hebbo

Syria and its 23 million people sit in the middle of a neighborhood containing important friends and allies of the United States. It is now entering its fourth year of chaos, bloodshed, starvation, and terror. It is a case study in how governments commit war crimes and crimes against humanity against their own citizenry: the kind of abomination for which the words “Never Again” were invented. It is a place where two terrorist entities – a criminal, family-run regime supported by Iran and Russia, and Al Qaeda affiliates supported mainly by private Gulf money – seek, both competitively and collaboratively, to extinguish Syrians’ hopes for decent governance featuring rule of law. It is a failing, dying state, where the horrendous survival tactics of a ruling clan have attracted to Syria foreign fighters in search of a new Afghanistan: a place in which terrorists can be trained and sent home to create havoc, and from which terror operations can someday be mounted – perhaps even against the American homeland.

Americans are aware that horrible things are happening in and around Syria. Yet in the wake of war in Iraq and ongoing operations in Afghanistan, Americans are inclined to see Syria, as bad as it is, as not their problem: what President Obama has called “someone else’s civil war.” For the president this has been a mixed blessing. He too sees Syria as something to be kept at arm’s-length, and has felt no public pressure to neutralize the regime’s killing machine (artillery, aircraft, rockets, missiles) militarily. And yet when he briefly considered military strikes in response to a chemical atrocity that made a mockery (perhaps for the fifteenth time) of his August 2012 red-line warning about chemical weapons usage, he encountered strong opposition in Congress. Russia threw him a lifeline: a chemical weapons deal that would keep the regime’s military intact and free to continue the war of terror so long as it agreed to give up chemical weapons and their components. President Obama did not intend the chemical weapons agreement to be a license for non-chemical mass murder. Yet he clings to the agreement as the slaughter of innocents continues. And he is under no public pressure to change course.

No celebrity has adopted Syria to stimulate private relief donations and change public policy. Still, the reaction of Americans to mass murder in and regional instability around Syria is not markedly different from the way Americans reacted to murder in faraway places – including genocide – in the twentieth century. Americans are not numb to human suffering, especially if – as it does disproportionately in Syria – it involves children among the victims. Still, the default position of Americans is to avoid involvement. The key variable affecting intervention has always been presidential leadership.

On Syria, President Obama has tried to lead with words. In August 2011 he called on President Bashar al-Assad to step aside. In August 2012 he warned against the crossing of a chemical red-line. Allies and adversaries alike are keen to see how presidential directives and warnings get translated into action. Did Vladimir Putin take Crimea and does he threaten the rest of Ukraine because he perceives American policy toward Syria as having been all bluff and no action? Perhaps the fairest thing to be said is that nothing in President Obama’s approach to Syria has given pause to Russian moves in Europe.

Indeed, Syria is important because, in the end, what happens in Syria does not stay in Syria. The Assad regime is demonstrating for the edification of dictators the world over the efficacy of survival tactics that include starvation, sexual abuse, torture, murder, and terror on a massive scale. More than 2.5 million refugees have spilled over into neighboring countries, including a NATO ally (Turkey), a close friend of the United States (Jordan), a country whose independence and stability has drawn consistent American support (Lebanon), and a place where thousands of Americans fought, died, and bear the scars of combat (Iraq). Syria is a place where Iran and Russia seek to carry their client to military victory: a victory that will be seen around the world as a defeat for America, try as we may to insist that the twenty-first century is different from all of the centuries preceding it.

Is Syria important enough for the United States – after having exhausted all diplomatic remedies and channels – to put a murderous regime’s weapons of mass terror out of commission? The answer depends partly on whether we feel a responsibility to protect people being set upon in a genocidal manner. It depends in part on the availability of means (such as stand-off weaponry) that minimize risk to friendly forces while bringing relief to populations enduring shelling, barrel bombs, and even Scud missiles. It depends on the discipline of a commander-in-chief willing to adhere to a straightforward military mission – destroy or serious degrade the ability of the Syrian military to bring massed fire to bear on civilian populations – without expanding that mission to something open-ended.

The catastrophe that is Syria will not improve with age. It cannot be contained. It and its implications both within and beyond Syria will worsen over time. The United States, acting alone, can neither own nor solve this problem from hell. But it need not limit its efforts at mitigation to writing checks for refugee relief. In Syria, diplomacy without a military component in reserve equals zero, as recently demonstrated in Geneva. Diplomacy with that component offers the possibility that military means may never have to be used. Unless Syria’s downward trajectory is altered now, when America has the option of alteration, we may find ourselves compelled eventually to fight at times and in places – perhaps far removed from Syria – not of our own choosing.