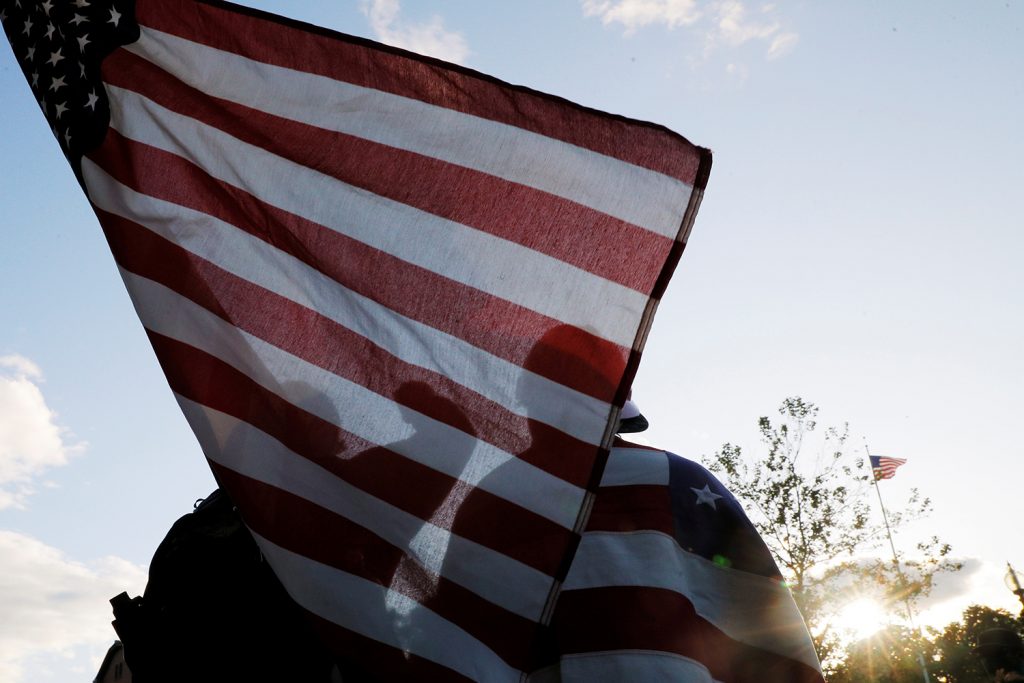 Protesters holding US flags rally against the death in Minneapolis police custody of George Floyd, in Boston, Massachusetts, U.S., May 31, 2020. REUTERS/Brian Snyder

It’s been a heart-breaking time for the United States, for our global Atlantic Council community of values, and for our team.

We confront the triple storm of the worst pandemic in a century, the worst economic downturn since the Great Depression, and now the worst US racial upheaval in fifty years.

We recoil as we watch the video, all eight minutes and forty-six seconds of it, showing the police officer kneeling on George Floyd’s neck as the life drains out of him. I have watched it several times in the past few days so that I will never forget it.

All weekend and into this week, as we witnessed the protests, rage, and anguish spread throughout American cities, we heard his words, words that will define this wretched moment: “I can’t breathe.”

His voice weighted with exhaustion, an African American colleague said to me this week that the large-scale eruptions we are currently experiencing occur only episodically, but the ugliness that set them off happens somewhere, and to someone, every day.

This ongoing COVID-19 period is revealing much about the unacceptable non-biological pathogens that poison American politics and society—whether they be racial, partisan, or economic in nature. The unfortunate truth of this period is that crises that should bring us together in common cause are too often dividing us. We yearn for the sort of unifying leadership that has blessed the United States during other moments of trial.

If the United States is to have credibility in leading like-minded countries against the metastasizing cancers of nationalism and authoritarianism, it must remain true to its best founding principles. As Lincoln said in December of 1862, one month before signing the Emancipation Proclamation, “We shall nobly save, or meanly lose, the last best hope of earth.”

If the Atlantic Council and its larger community are to thrive, we must together think through these times and how they should influence our actions and sense of common cause. Our mission is by its nature international, yet our dilemma is how to rescue an endangered international order while at the same time meaningfully addressing our national disorder. We could begin with this three-part approach:

This past weekend, at the suggestion of a friend, I reread Martin Luther King’s famous “Letter from a Birmingham Jail” of April 16, 1961. “Injustice anywhere is a threat to justice everywhere,” it reads. “We are caught in an escapable network of mutuality, tied in a single garment of destiny. Whatever affects one directly, affects all indirectly.”

Dr. King’s words were a more eloquent way of expressing our mission of “shaping the global future together.”

This tragic and unnecessary death of George Floyd, the injustices that preceded it, and the unrest that has followed it all drive home how much more we must do together to create a truly equal and just society in the United States. Those efforts are necessary for us to more effectively advance a more equal, just, democratic, prosperous, and collaborative international order, which lies at heart of the Atlantic Council’s founding purpose.

We’ve come some distance from those darker days of legally sanctioned racism, but we are a great distance yet from what we aspire to be as a society. At the same time, the distance seems to be growing from achieving a sustainable international community of common values, which is the Atlantic Council’s founding purpose.

This should not be a moment for despair, but rather be a time that inspires us to rekindle our common cause as a steadying and unifying force at an uncertain time. Even as we work to heal our wounds within the United States, we must at the same time regain our collaborative international spirit. One cannot be done without the other, but one also cannot wait for the other.

The best we can do is to continue our noble, if imperfect, efforts at the Atlantic Council to contribute to a better United States, transatlantic community, and world “tied in a single garment of destiny.”

With sadness and hope,