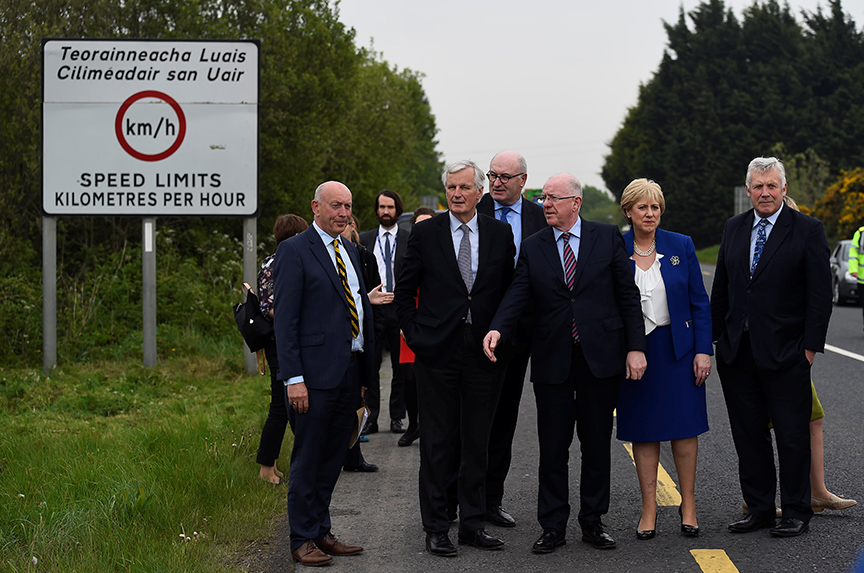 The land border shared by the Republic of Ireland and Northern Ireland has taken center stage in the current Brexit debate. The volume of trade that occurs between the Republic of Ireland and Northern Ireland, the potential for a renewal of ethnic violence, the isolationist views of Brexiteers in London, and the concerns of Northern Irish communities themselves have all combined to fuel a stalemate over the border. The reconciliation of these issues is essential to the passage and implementation of British Prime Minister Theresa May’s withdrawal agreement, and, according to the prime minister, to “ensure that there will be no hard border between Northern Ireland and Ireland—so people can live their lives as they do now.”

Historical significance of the border

The British Parliament created Northern Ireland in 1920 during the Irish War of Independence as a compromise between those in Ireland who sought independence (nationalists) and those who wanted to remain part of the United Kingdom (unionists). Although the arrangement was considered temporary at first, it became an entrenched political reality by the end of the 1920s, institutionalizing the conflict between nationalists and unionists in Northern Ireland. Tensions over the border festered throughout the period between 1923 and 1968, eventually leading to the ethno-nationalist conflict known as “the Troubles.”

Prior to independence in 1922, Ireland comprised a single economic unit (along with Britain), and the southern part of the island provided an agricultural hinterland to the industrial centers in the north. North-south trade was severely disrupted after the newly independent Irish Free State in the south pursued a hardline protectionist economic policy after 1932, virtually cutting itself off completely from the north. Despite reopening trade relations in the late 1950s, the beginning of the Troubles in 1968 brought security checkpoints to the border, disrupting trade again until the peace process began in the 1990s.

The end of the Troubles

After decades of conflict, nearly all sides came together on April 10, 1998, to sign the Good Friday Agreement, effectively ending the Troubles. In addition to putting an end to the violence, the agreement sought to establish a local government within Northern Ireland that would be shared by both nationalists and unionists. To further solidify peaceful cohabitation on a long-term basis, the Good Friday Agreement included three critical strands.

The first established a power-sharing Assembly and Executive in Northern Ireland. The second facilitated stronger economic ties between north and south, creating the North-South Ministerial Council (NSMC) and the North-South Implementation Bodies to promote mutual economic benefits and cooperation. The third strand focused on strengthening ties amongst the United Kingdom and Ireland with east-west institutions, creating the British-Irish Council and the British-Irish Intergovernmental Conference.

Strand two allowed for the Republic of Ireland and Northern Ireland to truly begin to build a post-conflict economic relationship. The NSMC is a body in which relevant government ministers from both the Republic of Ireland and Northern Ireland can develop, consult, and cooperate on issues of mutual concern, including shared economic interests. They began discussions and crafting mutually beneficial policies in the areas of agriculture, education, environment, health, tourism, and transportation.

The European Union (EU) has also played a crucial role in bolstering economic relations. The EU Single Market and Customs Union, along with maintaining the Common Travel Area agreement, has allowed citizens to conduct frictionless cross-border trade. In 2016, Ireland was the largest export destination for Northern Ireland, accounting for £3.4 billion in goods, roughly one-third of local businesses exports. An estimated 21 percent of all businesses in Northern Ireland either export to or import from the Republic, with a majority driving across the border. In the same year, the Republic exported approximately £1.3 billion worth of goods to Northern Ireland. For context, trade before the Good Friday Agreement amounted to £1.42 billion worth of goods in 1995, nearly half of what it is now.

How does the border impact Brexit?

Today, the constitutional status of Northern Ireland remains the country’s core political issue and parties are legally designated based on their official stance on its constitutional future. Indeed, the potential implication for the border was one of the main issues at stake for Northern Irish parties during the Brexit referendum. The Democratic Unionist Party (DUP)—the country’s largest unionist party—supported the Leave vote partly because it believed it strengthened the territorial integrity of the United Kingdom, while Sinn Féin—the country’s largest nationalist party—endorsed Remain partly because it believed the EU facilitated a stronger relationship with the Republic of Ireland. There is, however, collective agreement among both parties that Brexit must not undermine the Good Friday Agreement. Shortly following the Brexit referendum, the leaders of both the DUP and Sinn Féin sent a joint letter to May calling for the protection of the agreement.

As the British government seeks to exit the EU Single Market and Customs Union, the EU would require some sort of customs and regulatory check for any goods entering a European member state. That would mean border checks between the Republic of Ireland and Northern Ireland, potentially stagnating cross-border trade and putting strand two of the Good Friday Agreement in jeopardy. In addition, the Republic of Ireland and Northern Ireland share a single electricity market and electrical infrastructure. The EU would require Northern Ireland to comply with EU electrical regulations, which would contradict the UK’s demands for its own regulatory structure after Brexit. Should the UK leave the EU with no deal, or one that does not give special status to Northern Ireland, there are legitimate concerns of an immediate disruption of electrical services within Northern Ireland.

The Irish government’s commitment to an open border is essentially threefold. First, it recognizes the importance of all-island trade to the economies of both countries (especially to the communities living along the border) and is committed to maintaining those relationships. Second, several leading officials in Dublin fear that the re-imposition of physical infrastructure along the border would revive memories of Troubles-era security checkpoints, potentially inciting dormant terrorist groups like the Irish Republican Army (IRA), which regularly targeted border guards during the conflict. Lastly, as a signatory to the Good Friday Agreement, Dublin is legally obligated to uphold the agreement’s provisions guaranteeing frictionless trade across the border. The EU shares these concerns with the Irish government (though to varying degrees) and has essentially taken the same position regarding the border throughout the Brexit process.

The border’s place in British politics

The border does not normally take the fore in British politics, but May’s decision to call a snap election in 2017 lost her Conservative Party its majority in Parliament. This forced her to rely on the ten seats won by the DUP to form a government. The DUP’s subsequent voice in Westminster guaranteed a disproportionate unionist influence in the Brexit negotiations. While the DUP supported some continued relationship with the EU, it was adamantly opposed to any deal that appeared to treat Northern Ireland differently from the rest of the UK.

The present withdrawal agreement provides for a backstop which would see the UK remain in the EU customs union during a transition period before a permanent economic deal is reached between the UK and the EU. Further, additional exceptions would apply to Northern Ireland to maintain frictionless trade between it and the Republic, and, importantly, certain goods would require checks before passing between Britain and Northern Ireland. These measures breach the DUP’s red line. DUP leader Arlene Foster has gone as far as to suggest that she might prefer a Labour government in the present climate, and a recent decision by the party to abstain from a government finance bill is largely seen as a sign that the DUP is prepared to withdraw its support from the government.

It remains unclear if the withdrawal agreement May has reached with Brussels will impact the life of her government, but it is clear that the Irish border has impacted the Brexit debate and will force the prime minister to turn to her party’s rivals to push the deal through Parliament.

Image: European Union Chief Negotiator for Brexit Michel Barnier (front, second from left), accompanied by a delegation of Irish ministers, visited the Armagh and County Louth border between Northern Ireland and Ireland on May 12, 2017. (Reuters/Clodagh Kilcoyne)