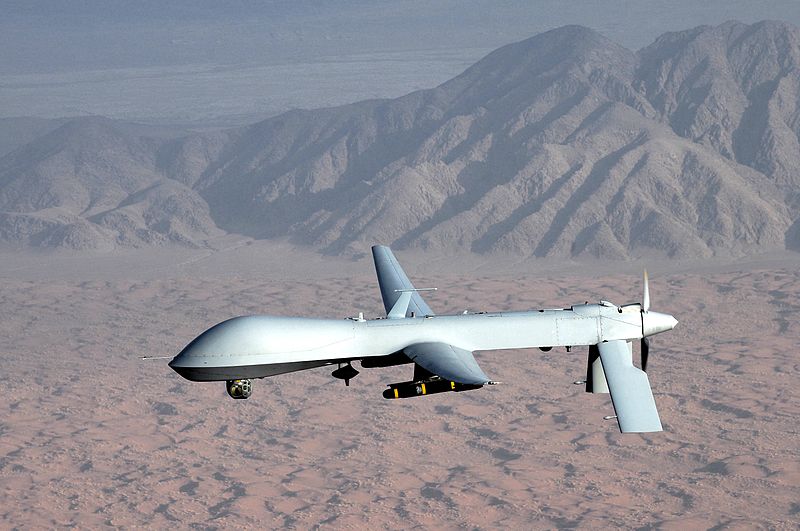 In a speech Monday at the Woodrow Wilson Center in Washington, John Brennan, President Obama’s counter-terrorism advisor, made a forthright defense of the drone war currently being conducted against Islamic militants in Pakistan, Yemen, and Somalia.

“As a result of our efforts,” he declared, “the United States is more secure and the American people are safer.” Brennan’s argument deserves credit for its boldness. Unfortunately, however, there’s good reason to doubt its veracity.

The first point in need of recognition is that while the Obama administration has long since dropped the phrase “Global War on Terror” from its lexicon, it has, through its amplified use of drones, escalated and expanded that war in all but name. On Monday, Brennan cited his administration’s achievements—the “death of bin Laden was our most strategic blow yet against al Qaeda” and “al Qaeda’s leadership ranks have continued to suffer heavy losses” from drone strikes inside Pakistan—but he also acknowledged that the government’s strategic focus simply shifted elsewhere as a result. Yemen’s al Qaeda in the Arabian Peninsula (AQAP) has become “al Qaeda’s most active affiliate and it continues to seek the opportunity to strike our homeland.” Additionally, he pointed out, al Qaeda in the Islamic Maghreb (AQIM) has a growing presence in North and West Africa, while the al Qaeda affiliate Boko Haram is gaining steam in Nigeria.

The wider the drone war spreads, however, the more scrutiny it deserves. After all, strikes aimed at truly high-value targets like Osama bin Laden and other major terrorist leaders make obvious tactical and strategic sense. But willy-nilly targeting of low-level militants is quite likely do more harm than good. In a now-famous October 2003 memo, then-Defense Secretary Donald Rumsfeld reasonably figured that the key question in determining whether “we are winning or losing the global war on terror” was “Are we capturing, killing or deterring and dissuading more terrorists every day than the madrassas and the radical clerics are recruiting, training and deploying against us?”

Brennan was at pains to insist that the Obama administration’s targeting policy is judicious enough to pass Rumsfeld’s test. Each and every targeted strike against a militant, he assured the audience, undergoes “a careful review and, as appropriate, will be evaluated by the very most senior officials in our government for decision.” As part of that process, “we ask ourselves whether that individual’s activities rise to a certain threshold for action, and whether taking action will, in fact, enhance our security.” He insisted that there is a “high bar” for action, that strikes are not carried out based on “some hypothetical threat—the mere possibility that a member of al Qaeda might try to attack us at some point in the future. A significant threat might be posed by an individual who is an operational leader of al Qaeda or one of its associated forces.”

But these assertions are contrary to recent news reports that Obama has quietly loosened rules for targeting suspected terrorists with drone strikes. The Washington Post reports that the new policy “allows the CIA and the military to fire even when the identity of those who could be killed is not known” and “marks a significant expansion of the clandestine drone war against an al Qaeda affiliate that has seized large ­pieces of territory in Yemen and is linked to a series of terrorist plots against the United States.”

How loose are the new rules? The Post article explains that “the expanded authority will allow the CIA and JSOC to fire on targets based solely on their intelligence ‘signatures’—patterns of behavior that are detected through signals intercepts, human sources and aerial surveillance, and that indicate the presence of an important operative or a plot against U.S. interests.” Compared to the previous standard—drone strikes had once been permitted only against known terrorist leaders who had been vetted and added to a classified list—this is a strikingly ad hoc policy. It’s true that relying on mere “signatures” as a basis for kill orders will likely result in the death of some militants who would have escaped under stricter rules. But it also radically ups the risk of killing innocents, which, in turn, produces legitimate anti-American anger that terrorist recruiters can exploit.

What’s even more shocking is that the Obama administration seems to have considered further loosening the standards for drone strikes in Yemen: In a recent report, the Wall Street Journal relayed information from “senior U.S. officials” to the effect that “the White House stopped short of authorizing attacks on groups of lower-level foot soldiers who are battling the Yemeni government,” without registering outrage that such attacks were being considered at all. In any case, even that standard would be quite restrained in comparison with the existing policy in Pakistan, where, the Post reports, “CIA drones flying over Pakistan’s tribal belt are allowed to strike groups of armed militants traveling by truck toward the war in Afghanistan, for example, even when there is no indication of the presence of al Qaeda operatives or a high-value terrorist.”

Such a steady escalation of the drone war—and the inevitable increase in civilian casualties that will accompany it—could easily tip the delicate balance that assures we kill more terrorists than we produce. To be sure, Yemen deserves the scrutiny of U.S. national security officials: It is Osama bin Laden’s ancestral homeland and many of the major pre-9/11 attacks were either planned there or carried out by Yemeni nationals. But there are already signs that the drone campaign there is producing a backlash: Toronto Star national security reporter Michelle Shepard recently highlighted the effects of an infamous December 2009 strike in Abyan province that killed 55, including 14 women and 21 children. Shepard quotes a Yemeni analyst, Abdul Ghani al-Iryani, who attributes the rise of Ansar al Sharia, a key AQAP ally, directly to the outrage over that incident. “Of the thousands of Ansar al Sharia now fighting in Abyan, the majority were not al Qaeda; they were angered by what they saw as American aggression,” Iryani said, calling it “one event that radicalized an entire [province].”

There’s every reason to think the same is true in Pakistan, where the shaky alliance between Washington and Islamabad has been pushed to the point of breaking. CNN terrorism expert Peter Bergen noted last summer that, “On average, only one out of every seven U.S. drone attacks in Pakistan kills a militant leader. The majority of those killed in such strikes are not important insurgent commanders but rather low-level fighters, together with a small number of civilians. In total, according to our analysis, less than two percent of those killed by U.S. drone strikes in Pakistan have been described in reliable press accounts as leaders of al Qaeda or allied groups.” This has clearly taken a toll on public opinion. A major survey conducted in Pakistan by the New America Foundation found that “nearly nine out every ten people in FATA [Federally Administered Tribal Areas] oppose the U.S. military pursuing al-Qaeda and the Taliban in their region” and that “the intensity of opposition to the American military is high. While only one in ten of FATA residents think suicide attacks are often or sometimes justified against the Pakistani military and police, almost six in ten believe these attacks are justified against the U.S. military.”

These are numbers that should concern all Americans, especially the President’s national security advisors. In that way, Brennan’s presentation on Monday would have been more reassuring if it included some acknowledgement that the administration’s bombing campaign against terrorists could at some point—if it hasn’t already—cross the Rumsfeld threshold of producing negative returns. Indeed, when it comes to the rapidly expanding drone war, the possibility of blowback has always been a decidedly known unknown.

James Joyner is managing editor of the Atlantic Council. This piece originally appeared on The New Republic.