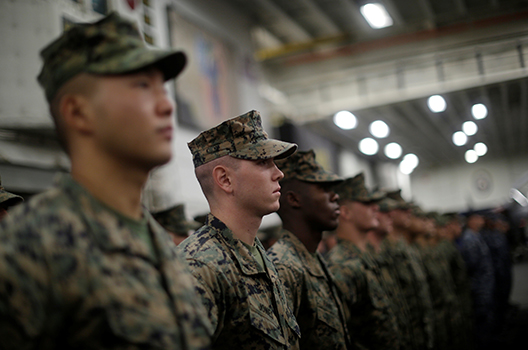 Thousands of miles from home, 1,700 US Marines began slowly arriving for their newest mission. Their destination was not the battlefields of Afghanistan and Iraq, however, nor the established bases of Europe and Japan, but the tropical city of Darwin, located far in Australia’s north.

The contingent of Marines is the largest to visit Australia since Washington and Sydney agreed in 2011 to allow up to 2,500 US troops to use the country for basing and training. The deployment, known as Marine Rotational Force-Darwin, will remain in Australia’s north until October, primarily participating in large training exercises with Australian and other partner regional forces, including the massive Talisman Sabre exercise with Australian forces from June to August.

While the initial agreement to allow US stationing in Australia was driven in part by the Obama administration “pivot” to Asia strategy, the opportunity to strengthen ties between the US and Australian militaries is the primary driver of the current deployments, according to John Watts, a nonresident senior fellow at the Atlantic Council’s Scowcroft Center for Strategy and Security. “It is not necessarily about being positioned to counter China,” he argued, as “there are more strategically and tactically relevant places to base forces.” Although the 1,700 Marines are the largest deployment to date, “the intent was always to scale up over time,” Watts added, and shouldn’t be misunderstood as a response to any specific threat. “This is just the next step,” he explained.

The long-term presence of US troops within Australia “is really important for training and interoperability,” for troops on both sides, Watts said. “Australia and the United States have fought together in every major conflict since World War One,” he explained, and remain important partners in Afghanistan, Iraq, the fight against ISIS, and maritime patrols in the Pacific.

Watts, who was a staff officer at the Australian Department of Defense and spent more than a dozen years in the Australian Army Reserves, recalled that when he was training with US troops he felt a “greater sense of kinship and affection between the soldier and the units than you might see with other forces. We would sum this up as mateship.” The US-Australian alliance, he explained, “goes beyond shared national interests to a fondness and comradery between individuals at every level from the soldier to political leaders.”

The joint exercises and constant contact give soldiers from both countries opportunities to practice working together, as well as building those personal ties. “Anything that further strengthens those people-to-people ties is really beneficial,” Watts said. He also noted that both sets of troops may also use the opportunity to “experiment” with new technologies and capabilities, which is becoming more important as militaries around the world begin to utilize new technologies to transform the battlefield.

Watts also stressed that the deployment will also have knock on effects for the wider region that is more than just the security the presence of troops could provide. “It is not just about a potential confrontation or flash points of conflict, there is a really important role that has to do with capacity building of partners, particularly in Southeast Asia,” according to Watts. In 2017, for example, officials and troops from Japan, Malaysia, the Philippines, Singapore, Thailand, and other regional nations were invited to observe or participated in US-Australian exercises. In addition to prepping their own forces, both the Australian and US troops help with “training the capacity of troops throughout the region for their own security,” he said.

The stationing of a significant contingent of Marines will also provide the United States a vital platform to help in relief efforts, in a region which has a long history of devastating tsunamis, cyclones, earthquakes, and volcanic eruptions. “Having forces positioned there able to respond to natural disasters and help out regional partners is really important,” Watts maintained. “It shouldn’t be underestimated.”

The deployment of US troops to Australia for the last seven years has been an important step to solidify the US-Australian alliance that is important for the whole region, Watts argued. For Watts, it has demonstrated that both “countries strongly believe in the rules-based international order and shows that the alliance is continuing to invest in regional security to further that end.”