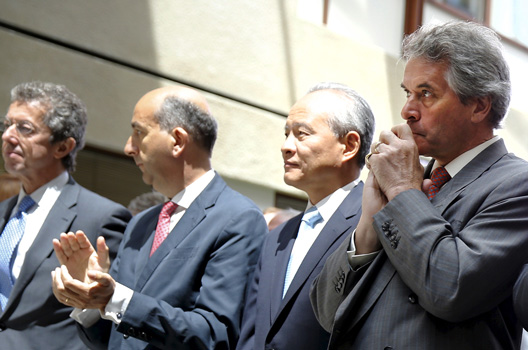 A steadfast alliance between United States and Europe—epitomized by a crippling sanctions regime—is widely credited with having brought Iran to the point where it was willing to consider curbs on its nuclear ambitions. But what would happen to that united front if Congress were to reject the deal reached between the so-called P5+1 and Iran in July? That’s a million-dollar question.

Supporters of the agreement say there is no question that if Congress were to block the deal, the sanctions regime—built up over the past decade—would unravel.

The United States would be “worse off” if Congress rejects the deal, R. Nicholas Burns, the Goodman Professor of Diplomacy and International Relations at Harvard Kennedy School and an Atlantic Council board member, testified to members of Congress August 5.

“While this ‘No Deal’ scenario could play out in many, different ways, I think it is probable that it would leave the US weaker, rather than stronger, in confronting Iran’s nuclear program,” Burns, who as Undersecretary of State for Political Affairs in the George W. Bush administration was the lead US negotiator on Iran’s nuclear policy, told the Senate Committee on Banking, Housing, and Urban Affairs.

“If the US left the negotiations unilaterally, I don’t believe it is likely that Russia and China and even possibly the European allies and other key international economic powers would follow us out the door,” he added.

If the United States were to walk away from the table, the “global coalition and the sanctions regime we spent the last ten years building would likely fray and weaken over time” and Washington would lose the leverage that brought Iran to the negotiating table in the first place, said Burns.

Secretary of State John F. Kerry told the Council of Foreign Relations July 24 “we go right back to square one” if Congress rejects the deal.

“I fear that what could happen is if Congress were to overturn it, our friends in Israel could actually wind up being more isolated and more blamed,” said Kerry.

And what about the United States’ partners in the P5+1, which includes the United Kingdom, France, Russia, China, and Germany?

“We would lose Europe and China and Russia with respect to whatever military action we might have to take because we will have turned our backs on a very legitimate program that allows us to put their program to the test over these next years,” said Kerry.

Europe is likely to resist re-imposing tough sanctions on Iran should the United States back away from the deal. European communities and companies—particuarly French and German automakers that once did roaring business with Iran—were hard hit by the sanctions. So it was no surprise that the ink on the nuclear deal had barely dried before a parade of European officials set off for Iran with an eye on future business opportunities.

French Foreign Minister Laurent Fabius and German Vice Chancellor and Economy Minister Sigmar Gabriel made separate visits to Tehran in July. Fabius’ visit came at a time when French companies such as Airbus and automakers Peugeot Citroën and Renault have been looking to pick up business in Iran.

In Washington, diplomats from the so-called E3—the United Kingdom, France, and Germany—have been working hard to try and convert congressional skeptics of the deal.

“If you kill this deal, what is the alternative?” Peter Westmacott, the British Ambassador to the United States, said in an interview with Politico. “I find that the response to that question is deeply unsatisfying, because all the alternatives, in my judgment, are worse.”

Westmacott and other European officials point to a sharp contrast between the reaction to the deal in Washington and that in other capital cities.

“In the others this is not a matter of political controversy. This is not a partisan issue,” Westmacott said.

And in Germany, “only fringe people see this as not a good deal,” Markus Knauf, a spokesman for the German Embassy in Washington, told Politico.

Speaking at the Atlantic Council May 26, Westmacott and German Ambassador to the United States, Peter Wittig, said international solidarity would erode if the West is seen as responsible for the nuclear deal’s failure.

“Many of the emerging countries would consider Congress blocking this deal as a trigger to at least question the present sanctions regime,” said Wittig.

The United States, Europe, and the United Nations imposed sanctions on Iran over the Islamic Republic’s nuclear program.

Under the terms of the deal announced in July, Iran will get phased sanctions relief in exchange for accepting restrictions on its nuclear ambitions.

“While American sanctions were very important in convincing Iran to negotiate, it was the global nature of the sanctions with buy-in from nearly every major economy in the world, that also made a critical difference in cutting off Iran from the international banking and financial system during the past few years,” said Burns.

“All of these benefits would be at risk after a US walkout,” he warned.

A Bloomberg report that Jacques Audibert, a senior adviser to French President Francois Hollande, had told members of Congress that if lawmakers were to reject the deal Iran would eventually return to the negotiating table and a better deal could be had, appeared to belie the arguments made by the deals’ supporters.

The report was based on information provided by two members of the House Armed Services Committee—Rep. Loretta Sanchez  (D-CA) and Rep. Mike Turner (R-Ohio)—who were present in the meeting with Audibert.

“[Audibert] thought if the Congress voted it down, that we could get a better deal,” Sanchez told Bloomberg.

However, the French Embassy; the US Ambassador to France, Jane Hartley, who was present in the meeting with Audibert; and Audibert himself said the report was inaccurate.

“If I thought it was realistic to renegotiate the agreement to make it stronger, I would support that option. But, I don’t believe it would be possible to do so and, at the same time, to maintain the integrity of our coalition against Iran,” said Burns.

If the United States were to drop out of the nuclear negotiations with Iran not only would the sanctions regime unravel, inspections by the United Nations’ nuclear watchdog, the International Atomic Energy Agency (IAEA), would be limited, Iran would be free to resume its advanced uranium enrichment and plutonium programs, and as a result would be on the threshold of nuclear weapons capability, Burns warned.

“There are greater risks, in my judgment, in turning down the agreement and freeing Iran from the considerable set of restrictions it has now accepted for the next decade and beyond,” he said. But Burns doesn’t buy the argument that the only alternative to the deal is war.

A crucial vote for Congress

US President Barack Obama has vowed to veto any congressional effort to kill the nuclear deal. The White House is hopeful that it will have the numbers in Congress to keep opponents from overriding a presidential veto. Resigned to the fact that Republicans will likely vote en masse against the deal, the White House has devoted its attention to trying to convince Democrats to back the agreement. It lost a key Democrat in July when Sen. Chuck Schumer of New York said he would vote against the deal.

The question lawmakers need to ask before they vote is whether there is a more effective way forward, said Burns.

He did not see a “more effective, credible or realistic alternative that would give the US a greater probability at this point of preventing an Iranian nuclear weapon.”

“A vote of disapproval in the absence of a credible alternative, would, after ten years of effort, be self-defeating for our country,” said Burns.

“If Congress votes to disapprove and manages to override the President’s veto, it would very likely dismantle the agreement, lead to the gradual disintegration of the global sanctions regime and remove all current restrictions on Iran’s nuclear efforts. Such a result would leave Iran closer to a nuclear weapon. That is not a sensible course for our country,” he added.