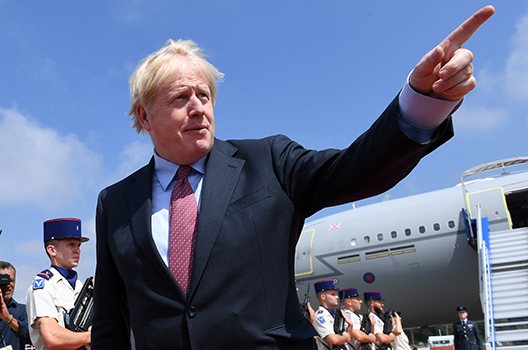 British Prime Minister Boris Johnson asked Queen Elizabeth II on August 28 to suspend Parliament, effective September 10, which will end the current parliamentary session and start a new session on October 14. The move, confirmed by the Queen, will bring to an end the United Kingdom’s (UK’s)  longest parliamentary session in nearly four hundred years but could leave parliamentarians little time to debate Brexit plans before the October 31 deadline.

British Prime Minister Boris Johnson asked Queen Elizabeth II on August 28 to suspend Parliament, effective September 10, which will end the current parliamentary session and start a new session on October 14. The move, confirmed by the Queen, will bring to an end the United Kingdom’s (UK’s)  longest parliamentary session in nearly four hundred years but could leave parliamentarians little time to debate Brexit plans before the October 31 deadline.

The new parliamentary session will begin on October 14 following the Queen’s Speech, during which the Queen outlines the government’s agenda. Closing the current session means that any bills that have been introduced but not yet passed will be scrapped, allowing Johnson’s team to start with a fresh legislative slate. “Bills have been introduced, which, while worthy in their own right, have at times seemed more about filling time in both the [House of] Commons and the [House of] Lords, while key Brexit legislation has been held back to ensure it could still be considered for carry-over into a second session,” Johnson wrote in a letter to members of Parliament (MPs). “This cannot continue,” he argued.

Johnson’s decision to call for a suspension—also known as prorogation—drew fire from MPs across the political spectrum who view it as an attempt to sideline Parliament in the lead-up to the October 31 Brexit deadline. House of Commons Speaker John Bercow called the move “a constitutional outrage,” whose purpose “would be to stop Parliament debating Brexit and performing its duty in shaping a course for the country.” Leader of the opposition Labour Party Jeremy Corbyn described Johnson’s attempt as “a smash and grab on our democracy to force through a no deal.”

Criticism from any Conservative MPs could threaten Johnson’s new legislative agenda, as the prime minister’s majority in Parliament stands at just one seatafter a by-election win in August by the Liberal Democrats. Grieve suggested on August 28 that while Parliament likely could not prevent prorogation, the move could trigger a vote of no-confidence in the Johnson government. “I think it’s going to be very difficult for people like myself to keep confidence in the Government, and I could well see why the leader of the opposition might wish to table a motion for a vote of no-confidence,” Grieve said.

With two months to go to the Brexit deadline, a possible general election further clouds the already uncertain road to the United Kingdom exiting the European Union.

Atlantic Council experts react to the suspension of Parliament and what it means for the way forward on Brexit:

Sir Peter Westmacott, a distinguished ambassadorial fellow in the Atlantic Council’s Future Europe Initiative and a former UK ambassador to the United States, France, and Turkey:

“Boris Johnson has set the cat amongst the Westminster pigeons with his request to the Queen—which she had no choice but to accept—to suspend Parliament in order to prepare for a new session, traditionally opened by an  address by the monarch setting out her government’s program.

“The length of time Parliament is shut down in order to hold a Queen’s Speech varies. In 2016, it was four working days. In 2014, it was thirteen days. This time, Parliament will be suspended for twenty-three working days before Her Majesty’ s address on October 14. The effect will be to minimize the amount of time members of parliament will have after they return to work next week to hold Boris Johnson and his new government to account. Parliament, it’s worth recalling, began its summer recess just one day after Johnson became prime minister on July 24.

“Even Johnson’s fellow Conservatives are enraged by what some see as an attempt to bypass parliament in order to force through a no deal Brexit. Former Chancellor of the Exchequer Philip Hammond tweeted this morning that it would be a ‘constitutional outrage’ if that happened. The (politically neutral) Speaker of the House, John Bercow, spoke in similar terms.

“What happens next is unclear. Johnson’s opponents may table a motion of no confidence. Johnson could respond by calling a general election, even though his Conservative Party does not currently enjoy a majority. In order to keep his party united, and to see off the threat posed by Nigel Farage’s hardline Brexit party, Johnson would need to campaign in favor of no deal. If he won, however, all options would be open to him.

“In short, plenty of outrage, lots of uncertainty, and everything still to play for.”

“This is clearly and obviously an attempt by Prime Minister Boris Johnson to prevent Parliamentary debate over Brexit—and perhaps even a vote of confidence in his government. In the last few days, a cross-party attempt to create an effective opposition to a ‘no-deal’ Brexit had made progress, creating a more serious threat to Johnson’s goal of leaving the EU on October 31. Parliament will now have only a few days next week and possibly the following to take action. It will then be suspended until October 14, only three weeks before Brexit Day.

“It is possible that Johnson is not a closet dictator, but believes preventing Parliament from trying to stop no-deal Brexit will increase his leverage vis-à-vis the EU, as he tries to get the Irish backstop removed from the Withdrawal Agreement. This is unlikely to work; indeed, the Irish government has repeatedly reinforced the importance of the backstop. Unless a radical new proposal emerges between now and October 31, the UK will have to accept the backstop or leave the EU without a deal.

“Under these extraordinary circumstances, what can we expect in the next few weeks? First, if the cross-party opposition (Labour, LibDems, SNP, etc.) are ever going to launch a vote of no confidence, they need to do it now. Given that several Conservative party MPs have indicated their total disapproval of the prorogation today, the vote of no confidence has a chance.

“If the government loses that vote, it will have fourteen days to win back the confidence of Parliament— presumably it would delay suspending Parliament for this aim. But unless Boris Johnson moves away from no-deal Brexit, the government is likely to fall. In that event, we could see something unheard-of in the UK: a technocratic temporary government in the lead up to a new general election. We are truly watching a British political revolution.”