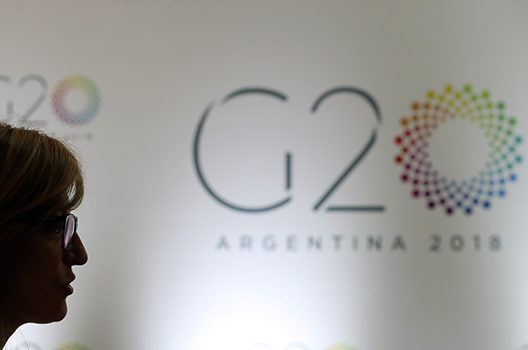 Ekaterina Zaharieva, Bulgaria's Foreign Minister and President of the European Union Council of Ministers, speaks during an interview with Reuters at the G20 Meeting of Foreign Affairs Ministers in Buenos Aires, Argentina, May 21, 2018. (REUTERS/Marcos Brindicci)

On November 30, global leaders will convene in Buenos Aires, Argentina, to discuss areas of economic cooperation and the world trading system. The tenth Group of Twenty (G20) summit, which convenes the leaders of twenty of the largest economies in the world, will focus on fair and sustainable development, but the numerous side meetings between allies and adversaries alike could provide some of the most significant diplomatic action.

“Despite the high stakes of the summit, expectations are low. With a track record of disastrous multilateral meetings in the past two years, any avoidance of a new crisis can already be seen as a success,” said Marie Kasperek, an associate director in the Atlantic Council’s Global Business and Economics program.

The jam-packed weekend comes as the Trump administration continues to push for new trade agreements with allies such as the European Union, Japan, and the United Kingdom, as well as potentially de-escalating current trade tensions with China. Here are the major trade storylines we are watching this weekend in Argentina:

Trump Faces Off with Xi

Trump will meet the Chinese president following the implementation of several rounds of tariffs and countertariffs this summer. Trump and his administration officials have routinely criticized Beijing for unfair trading practices such as product dumping, intellectual property theft, and forced technology transfer for international firms. Trump threatened this week that he would follow through on a threat to increase tariffs on $200 billion worth of Chinese goods, should Beijing not change its behavior.

Bart Oosterveld, director of the Global Business and Economics program:

“It is likely that trade tensions between the United States and China will escalate further at the Buenos Aires meeting. The US administration has formulated a comprehensive strategy toward China and will not agree to minor concessions.”

“We cannot expect any sort of trade deal out of the meeting. Ideally, the two would agree to set a framework for future talks. Similar to the [European Commission President] Juncker-Trump meeting in July, they could agree on holding off on further tariff actions while talks are ongoing. Unfortunately, this outcome is extremely unlikely. In an interview earlier this week, Trump said China should ‘make a fair deal’ that would ‘open up their country to competition from the United States.’

“However, it is unclear if Xi will be able to offer Trump a satisfactory solution, given that his last proposal to US trade reform demands was rejected last month. Trump has no economic domestic pressure (yet) to ‘blink first’ given that the economy is at full employment, the dollar is strong, and the impact of the tariffs and countermeasures by China and others are not widely felt domestically. It is beneficial to him with a view to the presidential elections in 2020 to ride out his wave of power vis-à-vis China.

“In the worst-case scenario, we could see three developments within the next month: the announcement of an escalation of current tariffs from 10 percent to 25 percent on January 1; tariffs between 10 percent and 25 percent on all remaining Chinese imports—which would mean tariffs on more than $520 billion worth of goods; or the announcement of tariffs on cars and car parts from China (and other countries) under the disguise of US national security considerations.”

Future of the WTO

The United States has been able to secure support from European and Japanese allies to try to limit unfair Chinese action by appealing to the World Trade Organization (WTO). The United States, Japan, and the European Union signed a joint statement in September denouncing industrial subsidies, technology transfer, and other “non-market” policies in a thinly-veiled swipe at Beijing. The three partners have also committed to creating new proposals for WTO reform this year.

But Washington is also a target at the WTO. China, the EU, Mexico, Norway, Russia, and Canada have filed a joint complaint at the WTO alleging that Trump’s steel and aluminum tariffs are not justified for national security and, therefore, violate trading rules.

Oosterveld: “The US administration wants to see significant changes at the WTO and is unlikely to de-escalate on any issue. Most notably, it is focused on China and other countries ceasing their use of emerging market status.”

Kasperek: “There is no easy solution to the case against the United States: if the WTO decided in favor of the plaintiffs, all of them would likely face the scorn of the US administration. If the WTO were to rule the US action to be in line with WTO law, this would likely open a Pandora’s box of other countries abusing the national security justification for their purposes.

“To me, there is a clear looming deadline of December 2019 for any agreement of the overhaul of the WTO that is endorsed by all members, including the United States. Currently, the US government is blocking the appointment of any new judges to the WTO’s appellate body as leverage for the changes they want in the WTO. By the end of 2019, this body, which needs a minimum of three judges to operate, will be reduced to one member if no new appointments are granted—leaving the former ‘crown jewel’ of the WTO, the bedrock of the global trading system, crippled and non-functioning.”

Although Trump will not be meeting with the European Commission Jean-Claude Juncker in Buenos Aires, his meeting with German Chancellor Angela Merkel will probably focus heavily on EU-US trade. Trump has grown impatient with slowed talks between European and US officials on a new trade deal. He threatened to impose car tariffs on the EU in July, which he only backtracked on after a statement from Juncker that both sides would work on a new trade deal. Reports suggest that Trump could decide to impose these tariffs next week should sufficient progress not be made. Germany has often been a target of much of Trump’s criticism of Europe, and Merkel will be keen to avoid damaging tariffs on German automobile manufacturers.

Oosterveld: “Car tariffs are likely and around the corner. The EU and the United States for now appear to be focused on the trilateral discussion with Japan about China’s trade practices.”

Kasperek: “While trade is an exclusive EU competency, we can expect German Chancellor Merkel to make a strong case against the potentially looming car tariffs on behalf of the EU. The ideal outcome of this conversation is likely the continuation of the status quo, meaning a continued transatlantic scoping exercise for future trade talks while further tariffs on the EU remain off the table. If Trump were to decide to issue tariffs on cars and car parts that enter the United States (including from the EU), we can expect an abrupt end to the current transatlantic talks, adequate countermeasures by the EU within the WTO framework, and a rapid deterioration of the transatlantic relationship.”