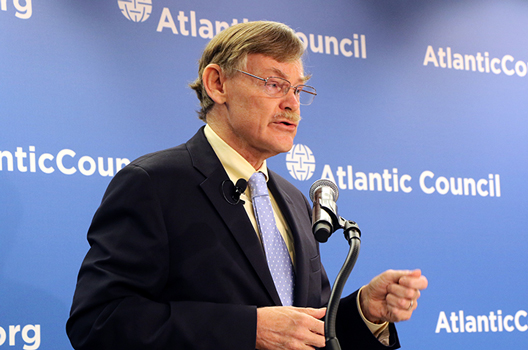 There is a strong likelihood that US President Donald J. Trump will withdraw the United States from the North American Free Trade Agreement (NAFTA), Robert Zoellick, a former US trade representative, said at the Atlantic Council on October 5, while advising US lawmakers to be prepared to push back.

“There is a very serious risk [of Trump withdrawing from NAFTA] depending on what happens with Trump’s popularity and the investigations [into collusion between the Trump campaign and Russia] that at some point he will withdraw from the agreement,” said Zoellick, who has also served as a US deputy secretary of state and president of the World Bank.

“I think we are headed to a fundamental crackup here… It partly depends on whether the Congress makes it painful for the administration to go in this direction,” he added.

The United States, Mexico, and Canada are currently renegotiating NAFTA. Negotiators will meet in Washington next week for a fourth round of discussions. NAFTA will feature prominently on Canadian Prime Minister Justin Trudeau’s agenda when he visits Washington and Mexico City next week. Trump, meanwhile, has threatened to terminate the deal.

Zoellick recalled a conversation that he had with Henry Kissinger in which the former secretary of state said that in his experience presidents want to be successful and so Trump will eventually move toward the norm.

Following his keynote address, Zoellick participated in a panel discussion with Phil Levy, a senior fellow at the Chicago Council on Global Affairs; Javier Mancera, a former minister for trade and NAFTA affairs at the Embassy of Mexico in Washington; and Daniel Schwanen, the Toronto-based vice president of research at the C.D. Howe Institute. Jenny Leonard, an associate editor at Inside US Trade, moderated the discussion.

Levy, Mancera, and Schwanen, along with Jason Marczak, director of the Latin America Center, and Katherine Pereira, an associate director in the Center, are co-authors of a new report from the Atlantic Council’s Adrienne Arsht Latin America Center: What if NAFTA Ended? The Imperative of a Successful Renegotiations.

A world without NAFTA

Zoellick and his co-panelists warned of the dangers of ditching NAFTA.

“Whether the cooperation is on illegal immigration… organized crime, narcotics, smuggling, anti-terror we are at risk of destroying a bipartisan, thirty-year policy to build a strong, healthy neighborhood; and why,” Zoellick questioned.

Noting that Trump’s economic advisers are mostly on the same page as the president when it comes to their disdain for NAFTA, Zoellick said it is, therefore, imperative for members of the US Congress to push back in the event that Trump attempts to withdraw from the agreement.

Trump’s “hostility toward NAFTA is premised on a core belief that bilateral trade deficits are like negative net income. It is, to him, losing; and you know what he thinks about losing,” said Zoellick.

“The problem about this core belief is that it is economic nonsense.”

He suggested that instead of using bilateral trade deficits to guide US policy, Trump should focus on growth, productivity, employment, incomes, and inflation. “But that’s not the administration’s approach,” he added.

In opening remarks, Rep. Will Hurd (R-TX) said NAFTA is the “number one and number two issue” in his district. “The communities that I represent live and die by trade between the US, Mexico, and Canada,” he said.

Emphasizing the dire consequences of a world without NAFTA, Hurd said the agreement signed into law by former US President Bill Clinton in 1993 has created jobs in the United States, Mexico, and Canada. “Sometimes we forget to talk about things we take for granted,” Hurd said.

Striking an optimistic note, the congressman suggested that “NAFTA 2.0 is going to be stronger and better than it is today,” and that Congress will pass a renegotiated agreement.

Zoellick, however, was not so sure. He predicted that Congress was unlikely to approve a renegotiated NAFTA partly because most Democrats are more protectionist on trade than Trump, the Republicans are split on the matter, and the president has proven “inept” at working with Congress.

Zoellick said that the best outcome would be for Congress to assert its constitutional power and stop what he said would be “self-defeating actions.”

Levy said the reason why NAFTA has become a subject for discussion today is because Democrats as well as Republicans have blamed it for the loss of jobs. Instead of trade agreements, it is technological advancements that have put people out of work, he contended.

Assessing the negotiations ahead of the next round in Washington, Zoellick said it appeared that the US position is: “the US wants other countries to open up their markets, but we don’t want to be constrained by rules.”

Mancera said that the Mexican government would like to get the negotiations wrapped up as quickly as possible given the fact that Mexico is scheduled to have presidential elections in 2018. “The current [Mexican] administration would love to have this chapter closed before the election, but I don’t see how… that can be done,” he said.

The negotiators still need to overcome some big challenges.

Specifically, Chapter 19 has become a key sticking point in the negotiations with Canada. The Trump administration wants to eliminate Chapter 19, which allows the private sector to challenge antidumping and countervailing duty rulings; Canada insists on retaining it.

Recalling that the Canadians had “spilled blood” to get Chapter 19 three decades ago, Zoellick said: “It is a very big stretch in my mind to believe that any Canadian government could walk away without a Chapter 19 provision.”

Canada had a bilateral trade agreement with the United States prior to NAFTA. Schwanen said that agreement could be revived in the event of NAFTA’s collapse, But, he conceded, it would be a “weak Plan B.”

Schwanen said Canadian officials have been helping US lawmakers realize the importance of US trade with Canada. “That is Plan A. We don’t really want to talk about Plan B yet,” he added.

At the end of the day, whether the United States remains in NAFTA is Trump’s decision to make.

“Donald Trump has an antipathy towards bilateral trade deficits and, I think, it goes to his core political support,” said Zoellick. He said it was hard for him to see how, given the set of changes Mexico and Canada would agree, Trump would be satisfied simply repackaging NAFTA.

Zoellick had some advice for Canadian and Mexican negotiators: “If you can find things that make Trump a winner and that don’t cost you anything, then do it.”