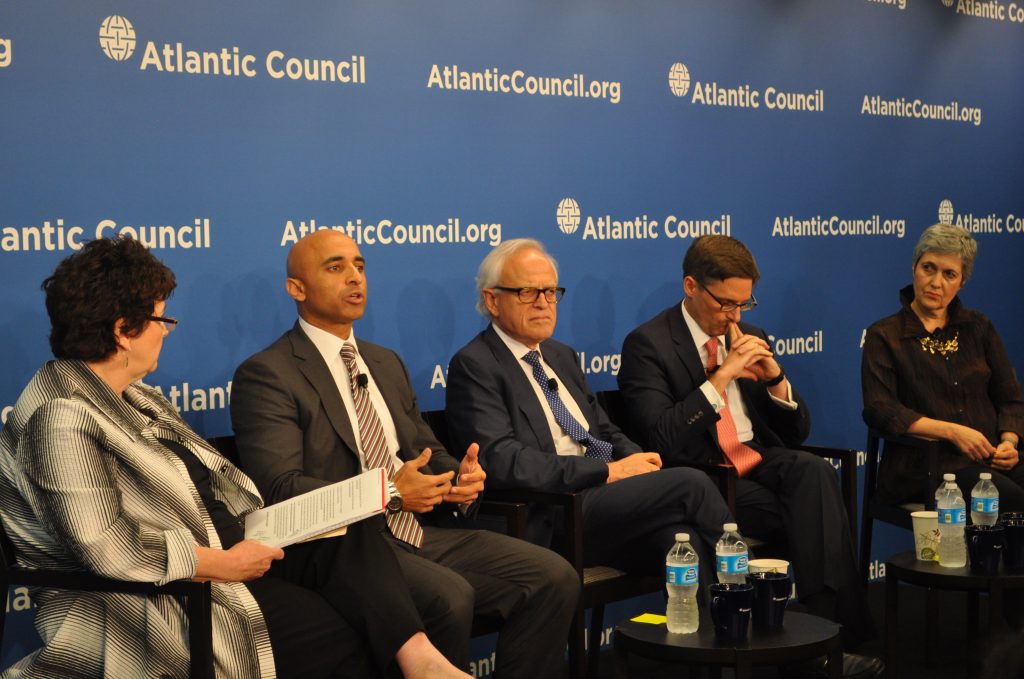 The United Arab Emirates and its five partners in the Gulf Cooperation Council (GCC)—worried about Iran’s hegemonic ambitions in their neighborhood—want a US “security guarantee,” Yousef Al Otaiba, the UAE’s Ambassador in Washington, said May 7 at the Atlantic Council.

“We are looking for some form of security guarantee, given the behavior of Iran in the region, given the rise of the extremist threat,” Al Otaiba said. “In the past, we have survived with a gentleman’s agreement with the United States about security. I think today we need something in writing. We need something institutionalized.”

On May 13, US President Barack Obama will host leaders of all six GCC countries—Bahrain, Kuwait, Oman, Qatar, Saudi Arabia, and the UAE—at the White House, and meet them again May 14 at Camp David. White House spokesman Josh Earnest said the meetings will give leaders a chance to “discuss ways to enhance their partnership and deepen security cooperation.”

Al Otaiba was part of a discussion titled “The Road to Camp David: The Future of the US-Gulf Partnership.” Karen DeYoung, Senior National Security Correspondent at The Washington Post, moderated the panel, which was hosted by the Atlantic Council’s Brent Scowcroft Center on International Security.

“There are ways, given the new context, to think about [how] to use some sort of guarantees to help assuage our Gulf partners’ anxieties and also to show our commitment to the region,” said Chollet, who served as the US Assistant Secretary of Defense for International Security Affairs in the Obama administration. “Some creative mechanisms…could be offered.”

Worries About an Iran Nuclear Deal

Gulf countries are particularly anxious about a nuclear deal that the P5+1 countries, which includes the United States, are negotiating with Iran. That deal seeks to limit Iran’s nuclear program in return for phased sanctions relief.

In theory, such a deal should reduce the Gulf countries’ sense of insecurity. But instead, it has had the opposite effect, said Martin Indyk, Executive Vice President of the Brookings Institution.

“There is a real question about this deal, while it takes care of Iran’s nuclear weapons ambitions for the medium term, whether it is actually going to increase the sense of insecurity and that’s why strategic reassurance [to the Gulf countries] is necessary,” said Indyk, Obama’s former Special Envoy for Israeli-Palestinian negotiations.

As such, Indyk said he’d be looking for a “formal, explicit defense commitment” from the United States to its Gulf partners at Camp David. He argued that given the rise of the Islamic State of Iraq and al-Sham (ISIS), Iran’s exploitation of regional chaos to pursue its hegemonic ambitions, and a possible nuclear deal with Iran, the Obama administration must offer “strategic reassurance” to Washington’s allies in the Gulf.

“The confluence of events has increased that sense of insecurity [among Gulf countries] in a very real way,” he said, adding that the Pentagon must use the window of ten to fifteen years created by the nuclear deal to build a “regional security architecture that includes a nuclear umbrella for our allies, such that when we get to the end of this agreement everybody in the region will feel more secure.”

“Most of the GCC countries will tell you they are more concerned about Iran’s behavior than they are about whether it has 5,000 or 7,000 centrifuges,” the UAE’s top diplomat in Washington said, adding that the Camp David meeting will focus on how the United States and the GCC can come up with a containment strategy with respect to Iran.

Despite intense levels of engagement between the United States and Iran on the nuclear issue, US officials say Syria does not come up in these discussions.

Indyk said the United States would have to respond strongly to Iran’s “nefarious” activities once Iran is brought out of the cold as a result of the nuclear deal.

Obama “has to stand up to Iran more forcefully than he would otherwise to show not only our Gulf allies, but Israel, Egypt, Jordan, that the United States is not going to abandon their interests on the altar of a détente with Iran,” said Indyk, who served as US Ambassador to Israel from 1995 to 1997 and again from 2000 to 2001.

Rather than a “grand bargain and a rapprochement” between the United States and Iran, Washington will pay more attention to Iran’s activities “until such a point that Iran comes to understand that it is not just about its nuclear ambitions, it is about its hegemonic ambitions, and when they come to understand that, then a détente becomes possible,” he added.

The Pentagon displayed evidence of the more forceful posture Indyk alluded to on April 28, when the US Navy sent its USS Farragut destroyer to the Gulf after Iran seized a Marshall Islands-flagged ship. Since that incident, the US Navy now accompanies British-flagged cargo ships in the Strait of Hormuz in addition to US commercial vessels.

As Washington works to finalize a nuclear deal that would facilitate Iran’s engagement worldwide, it lacks “the luxury of letting the pendulum swing all the way,” said Ellen Laipson, President and CEO of the Stimson Center.

“We have to somehow represent the careful calibration that we are trying to help bring Iran in from the cold. We are not going to embrace their behavior in the region, but we are trying to provide these incentives in a more subtle way,” she said. “On the Arab side, it may be that they want to say clearly that Iran is an existential threat. I don’t think we can associate ourselves entirely [with] that threat perception.”

Al Otaiba said he’s impatient with the pace of US arms sales, noting that Gulf forces are now fighting in two theaters—against ISIS in Syria and Iraq, and against Shia Houthi rebels in Yemen.

The United Arab Emirates has fought alongside US troops in six wars—a fact Al Otaiba said “deserves some sort of recognition and some kind of process.”

The United States and its Gulf partners have recently made great advances in their military partnership, said Chollet. But given concerns about the nonconventional threat posed by Iran, more must be done in areas such as cyber and maritime security, and missile defense, he said.

US Secretary of State John F. Kerry, meanwhile, will meet his GCC counterparts May 8 in Paris to lay the ground for the Camp David summit, which Indyk called a “turning point” in terms of the US-GCC security relationship.

“It is a process that will go into the next President’s inbox as well,” he added.

Image: From left: Karen DeYoung, Senior National Security Correspondent at The Washington Post, moderates a discussion at the Atlantic Council May 7 between the United Arab Emirates’ Ambassador to the United States, Yousef Al Otaiba; Martin Indyk, Executive Vice President of the Brookings Institution; Derek Chollet, Counselor and Senior Advisor for Security and Defense at the German Marshall Fund of the United States; and Ellen Laipson, President and CEO of the Stimson Center.