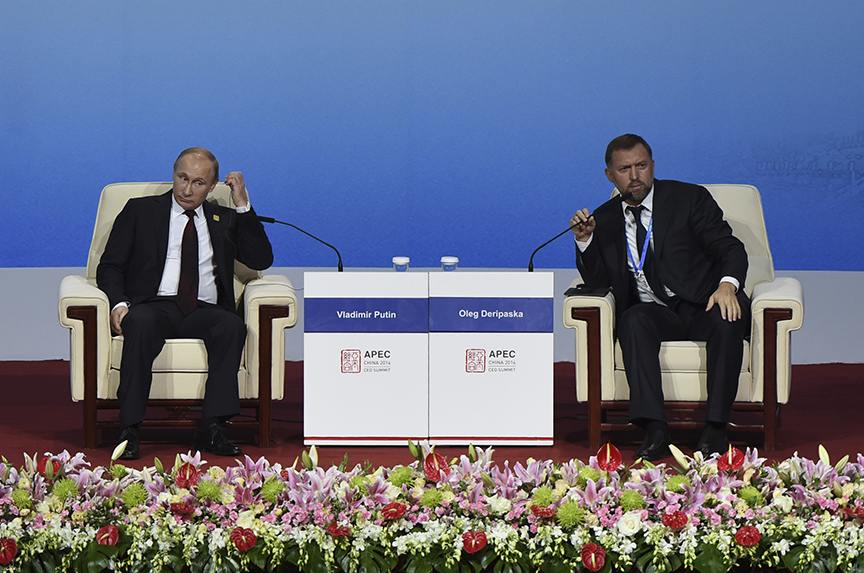 Russian President Vladimir Putin (left) and Oleg Deripaska, chief executive officer of the aluminum giant RUSAL, participated in the APEC CEO Summit in Beijing November 10, 2014. Deripaska was the target of US sanctions on April 6, 2018. (Reuters/Wang Zhao)

Sanctions imposed by the US Treasury on thirty-eight Russian individuals and entities on April 6 essentially correspond to Section 241 of the Countering America’s Adversaries Through Sanctions Act (CAATSA). Officially, the designations hit seven Russian oligarchs and twelve companies belonging to them, seventeen senior Russian government officials, and a state-owned Russian weapons trading company together with its bank subsidiary. These sanctions are a continuation of the US tendency to sanction people close to Russian President Vladimir Putin.

Four of the designated oligarchs are real big businessmen—Vladimir Bogdanov, Oleg Deripaska, Suleiman Kerimov, and Viktor Vekselberg. The first three are widely seen as very close to the Kremlin. It has long been rumored that Putin owns a large share of Bogdanov’s oil company Surgut. Deripaska has ties to US President Donald J. Trump’s former campaign chairman Paul Manafort. Kerimov was recently arrested in France for large-scale money laundering and the Panama Papers revealed that he had paid Putin’s childhood friend, cellist Sergei Roldugin, $259 million for “services.”

The surprising name on the sanctions list is that of Vekselberg. He is seen as one of the old oligarchs from the 1990s and not so close to the Kremlin despite the fact that he and Deripaska are co-owners of the aluminum giant RUSAL. The aluminum industry is being hit badly since RUSAL is one of the world’s largest aluminum producers.

Igor Rotenberg has received much of his sanctioned father’s wealth. Shamalov was given a large share of the petrochemical company Sibur that had been privatized from Gazprom by Gennady Timchenko. The seventh “oligarch” on the sanctions list, Andrei Skoch, has a sordid legal reputation and is a junior partner to Alisher Usmanov, an Russian businessman, who was not sanctioned.

Eight of the oligarchic companies are dominated by Deripaska, two by Igor Rotenberg, one by Shamalov and Renova is Vekselberg’s holding company. The sanctions are an enormous blow to Deripaska and Vekselberg, who have a large international presence. That Rosoboroneksport, the state-owned weapons trading company is designated, as well as its bank, seems natural.

The seventeen government officials sanctioned fall into two categories. Four are heads of state companies while the rest are senior state officials mainly in the security sphere. The state enterprise managers—Andrey Akimov of Gazprombank, Alexey Miller of Gazprom, Andrey Kostin, and Sergey Fursenko of Gazprom Neft’s board—were widely expected to be sanctioned.

The big change is that US sanctions now apply to three top Gazprom managers, while the European Union has opposed any sanctioning of Gazprom. While the United States has not gone so far as to put Gazprom or Gazprombank on the Specially Designated Nationals and Blocked Persons List (SDN List), it has targeted the entities’ financing and now isolated its executives. This puts significant pressure on the entities without creating more systemic risks from cutting them off entirely from the US financial system.

The people who are really close to Putin among the new designations are Shamalov, Rotenberg, Bogdanov, Akimov, Miller, Kostin, and Fursenko as well as several of the state officials, notably National Guard commander Viktor Zolotov, National Security Advisor Nikolay Patrushev, and his aide Evgeniy Shkolov. Indeed, the leading criterion for the sanctions appears to have been closeness to Putin himself. With these sanctions the Trump administration has sent a clear message: it is costly to be close to Putin.

Anders Åslund is a resident senior fellow in the Eurasia Center at the Atlantic Council. Follow him on Twitter @anders_aslund.