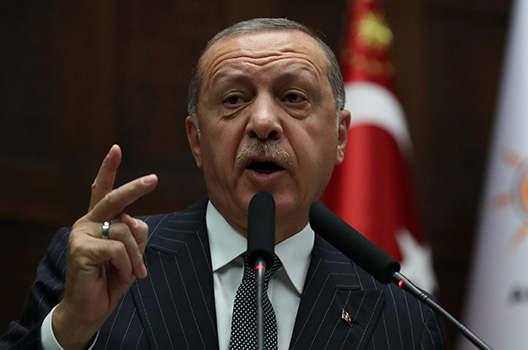 The release by an Izmir court of US Pastor Andrew Brunson on October 12 reflects a new round of pragmatism by Turkey’s president, Recep Tayyip Erdoğan, to undo some of the damage recent policies have done to Turkey’s ties with the United States, other Western allies, and neighbors as he struggles to ease the country’s economic, security, and foreign policy problems.

According to Turkish media reports, the court sentenced Brunson to three years and one month for “aiding a terrorist organization,” but also ordered his release from house arrest and freed him to leave the country, which his lawyer reportedly indicated he will.

The decision came after prosecution witnesses changed their stories that softened an already very weak case against the Protestant minister for alleged spying, ties with the Kurdistan Workers’ Party (PKK) terrorist movement, and ties with Gülenists accused of responsibility for the July 2016 attempt to overthrow the Turkish government.  It also came after acute pressure from Washington, including personal sanctions against two Turkish ministers and punitive tariffs against aluminum and steel, Turkey’s number one export to the United States in recent years—a tiff that accelerated and deepened an already unfolding financial crisis that saw the Turkish lira fall by 25 percent in the month of August alone.

Erdoğan has been famous for both pugnacious confrontation, especially with the United States and other Western allies, but also pragmatism when required to protect his, his Justice and Development (AK) Party’s, and his country’s interests.  This is the context in which Brunson’s release should be viewed:  Erdoğan stepping back from risk-taking with Washington over the affair.

Other recent pragmatic steps are many: the deal with Russia to defer or delay a violent takeover of Idlib in northwest Syria by Bashar Assad’s forces that would have produced a new rush of hundreds of thousands of refugees into Turkey and points in Europe beyond; moves, not very successful yet, to repair frayed relationships in Europe; and finance ministry measures to halt the slide of the lira and to restore a measure of confidence in the country’s economic managers.

What comes next is unclear, though press reports suggest that Brunson’s release reflects a deal with Washington that presumably includes further expectations on both sides.  These should include the release of Turkish-national US government mission staffers and a NASA research scientist who holds both US and Turkish citizenship. They have been tried on accusations of espionage and ties with the PKK and the US-based Turkish cleric Fethullah Gülen no more credible or substantiated than those against Brunson.

A renewed effort by the US Justice Department to engage with Turkey on the matter of Gülen and his possible complicity in the 2016 coup should also be undertaken.

US-Turkish relations won’t soon enter a halcyon period.  Developments in Syria will continue to pull the countries apart and US cooperation with PKK-stained Syrian Kurdish rebels will remain a sore.

Nevertheless, Erdoğan’s latest moves pull the country back from the brink and give space for US initiatives with Ankara to put a long-lived alliance back onto firmer footing than in many years.

Ross Wilson is a distinguished senior fellow at the Atlantic Council. He served as the US ambassador to Turkey from 2005 to 2008.