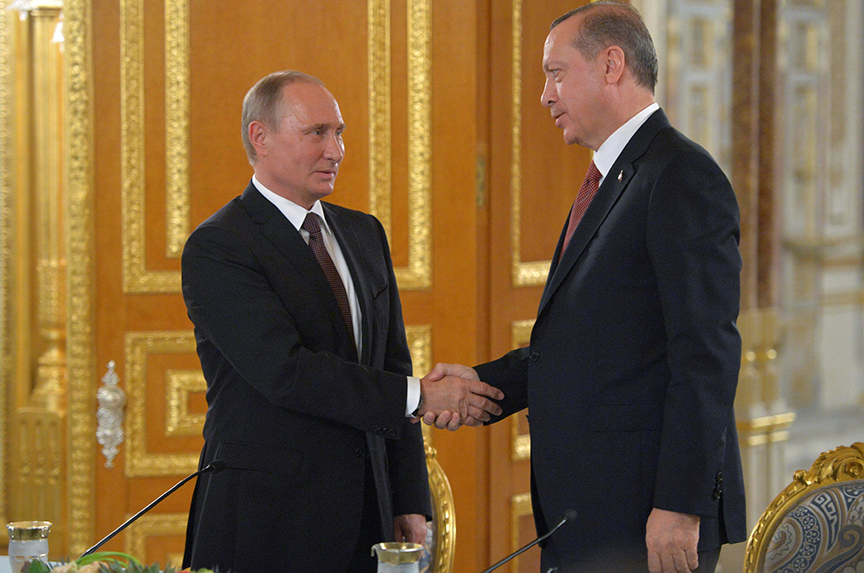 Russia’s decision to go ahead with Turkish Stream, an offshore pipeline that will bring Russian gas to Turkey, cements its dominance of the Turkish gas market.

In political terms, the revival of Turkish Stream—or TurkStream as Gazprom, Russia’s state-owned energy company, now terms the project—epitomizes the entente developing between Moscow and Ankara, a relationship that is of crucial importance given their differences in recent years, particularly over the war in Syria.

In strictly practical terms, however, TurkStream ensures that Russia will maintain its grip on the Turkish gas market. The project’s success will send a signal that Russia is still looking to find a way to supply gas to customers in Southern Europe that—if and when it stops using Ukraine as a supply route—it may not be able to reach by way of its controversial Nord Stream 2 pipeline across the Baltic Sea.

Russian statements issued during the course of the recent World Energy Congress in Istanbul, where the presidents of Russia and Turkey signed an intergovernmental agreement on TurkStream, detail Gazprom’s plans.

An initial 15.75 billion cubic meters/year (bcm/y) pipeline will be laid between the Russian Black Sea port of Anapa and the Turkish Black Sea port of Kıyıköy in 2018. This line will effectively serve as a replacement delivery system for Russian gas currently supplied through Ukraine’s transit pipeline system and the Trans-Balkan pipeline across Moldova, Romania, and Bulgaria.  A contract for delivery of up to 14 bcm/y of Russian gas through this system is due to run out at the end of 2019. A second 15.75 bcm/y line will then be laid in parallel with the first, probably in 2019. This is intended to partially serve an expected increase in Turkish demand (although at present the outlook for gas in Turkey looks pretty flat for the next few years) together with deliveries to the Balkans.

At present, it does not appear that the original December 2014 plan for a 63 bcm/y, four-string pipeline is still under active consideration. Any development of further strings after the first two are laid will clearly have to wait for changed conditions in Europe’s gas market which, at least for the next few years, looks to be over-supplied.

Gazprom has said that it will be responsible for laying the twin 900-km offshore lines across the Black Sea while a joint venture will be established with Turkey’s state gas company, Botaş, for a 180-km onshore connection westwards from Kıyıköy.

A key element in the Gazprom presentations is that TurkStream will have two offtake points. The first will be at Lüleburgaz, where it will intersect with the Trans-Balkan Pipeline. This will make it technically possible to send gas to Bulgaria and adjacent Balkan destinations via Turkey. However, backhaul (reverse flow capability) would first have to be implemented on the Trans-Balkan Pipeline.

The second offtake point is Ipsala, where a distribution center is to be established. This is highly significant as Ipsala is located on the Turkish-Greek border, adjacent to the Greek town of Kipoi. Ipsala-Kipoi is to be the junction of the Trans-Anatolian Natural Gas Pipeline (TANAP) and Trans-Adriatic Pipeline (TAP) currently being built as part of the EU-backed Southern Gas Corridor. Botaş is a 30 percent partner in the TANAP project and thus a key player in developing the TANAP facilities at Ipsala. The choice of Ipsala would, therefore, seem to indicate that at some stage Gazprom will seek to ensure that gas delivered to Turkey by way of TurkStream can enter the TAP to reach customers in Greece and Italy.

The reason Gazprom has opted to develop a two-string system, as opposed to the four-string plan, is simply that building a larger system would require development of infrastructure capable of carrying around 30 bcm/y onwards from Ipsala-Kipoi to existing connections to final markets. In practice this means a connection to the Snam-Rete system in Italy.

On February 24, Gazprom Chief Alexei Miller signed a memorandum of understanding (MoU)  in Rome with the Public Gas Corporation of Greece (DEPA) and an Italian energy company, Edison, on future trilateral cooperation, presumably focused on the possible revival of an interconnector running from the Turkish border across Greece by a subsea route, dubbed Poseidon, to Italy. Almost nothing has been heard of this move since the MoU was signed.

This project, the Interconnector Turkey-Greece-Italy/Poseidon (ITGI/Poseidon), lost out to TAP when the developers of Azerbaijan’s giant Shah Deniz gas field were looking for an export system to handle up to 20 bcm/y of gas deliveries to mainstream European markets. The problem, which essentially rules out for the foreseeable future any development of TurkStream beyond a two-string system, is that ITGI/Poseidon requires laying a 580-km pipeline across Greece along with the 207-km Poseidon line between Thesprotia in Greece and Otranto in Italy. Such a project would cost at least $5 billion and there is no indication that anyone who might be interested in such a project, including Gazprom, either has the cash with which to proceed or the determination to see how else it could be financed.

However, Gazprom could turn to TAP to get around 10 bcm/y of gas to Europe through TurkStream. The terms under which TAP secures regulatory approval from the European Union include a firm commitment to third-party access. TAP’s developers have secured exemptions from this principle for the first 10 bcm/y of capacity, which is also the amount needed to cover initial deliveries of gas to Italy from Shah Deniz Stage Two development. However, TAP is designed so that, with added compression, it can carry around 20 bcm/y. This additional 10 bcm/y of capacity is open to third-party access.

If Gazprom should seek to access TAP, it has a right to request an open season. Moreover, if Gazprom were to do this in a year or two, then it would likely find itself the sole bidder for use of the expanded capacity, since the next wave of gas that might realistically expect to seek space in TAP is the so-called second wave from Azerbaijan. Although Azerbaijan is still hopeful that gas from the offshore Absheron field might begin to flow as early as 2019, at a time of low prices there are real questions as to whether Total, the field’s developer, would want to push ahead with such an aggressive development timetable, not least since output in the field’s early years is not expected to be much more than 5 bcm/y.

As Azerbaijan may well be unable to add significantly to TAP input until the mid-2020s, it becomes correspondingly likely that Gazprom would be the sole bidder for significant space in TAP if it made such an application in, say, late 2017 or during 2018. (There might, just possibly, be some requests for limited quantities of LNG landed in Greece to use the line, but it would be a surprise if this amounted to much more than 1 or 2 bcm/y.) As long as Gazprom offers to pay commercial terms for transit, TAP would be duty bound to carry gas supplied from Gazprom delivered to TAP via TurkStream.

Gazprom would have to give TAP proper notice of actual delivery timetables—perhaps a couple of years—in order to allow TAP’s developers time to install the additional compression required to move an extra 10 bcm/y.

For Gazprom, the advantage of terminating TurkStream at Ipsala is that it ensures that—if it so wishes—it can then put Russian gas into TAP. Moreover, it does not have to make up its mind immediately; it can wait and see what the European market looks like in 2018 before it takes a decision, since TAP is only due to open in early 2020.