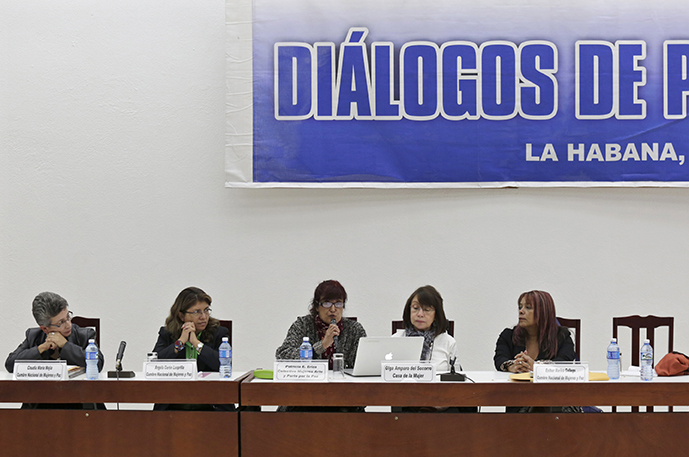 In many countries, women are agents of change who bring about positive transformations not only for themselves, but for the societies in which they live. In other parts of the world, however, women are victimized and still relegated to second-class citizens. Sometimes these two things can be happening at the same time in the same territory.

Colombia is a case in point. Women have been champions of peace in the country throughout the decades-long conflict. Colombian President Juan Manuel Santos is confident that a peace accord would be signed with the leftist Revolutionary Armed Forces of Colombia (FARC) guerrillas on or around a March 23 deadline. As the world marks International Women’s Day on March 8, it is only appropriate to celebrate the participation of women at the peace negotiation table as the biggest breakthrough in decades of work by women’s groups in Colombia.

Compared to many countries in the world, Colombia has a progressive legal framework for the protection of women. However, the implementation of these legal structures is weak. Governmental mechanisms and civil society efforts to address gender-based violence are insufficient. This is of special concern in an environment of protracted conflict in which women and girls are disproportionately affected.

Colombia has the second-largest population of internally displaced persons (IDP) in the world after Syria. Even though nearly half of IDP families have been declared to be headed by women, the judicial framework remained with no gender sensitivity until 2008. Data shows that one in two displaced women suffer some form of gender-based violence, that forty-one percent of all women and fifty-two percent of internally displaced women have been victims of physical violence, although only twenty-two percent reported the violence. Every hour there are an average of nine new acts of sexual violence against women and girls in Colombia and thirty-seven percent of Colombian women report suffering violence at the hands of their intimate partners. Studies from the National Center for Historical Memory show that gender-based violence against women has been a strategy of political and territorial control. The Colombian government has been motivated to address this problem as a result of these findings, together with national and international voices of concern.

Since its creation in September, 2014, the Peace Process’ Sub-Commission on Gender has diligently incorporated gender issues into the final accord. UN Women as well as UN Special Representative of the Secretary-General on Sexual Violence in Conflict, Zainab Bangura, have said that the accord acknowledges the different forms of violence that women have suffered, and the transformative potential of gender equality. This is of special importance given that peace agreements are sixty-four percent less likely to fail when they include civil society, and 35 percent more likely to last at least fifteen years if women participate in its creation.

Yet, of thirty-one major peace processes over twenty years in the world, women were two percent of the mediators, four percent of the signatories, and nine percent of the negotiators. Will Colombia be a different story? Glimmers of hope are obscure given the lack of decision-making roles for women, and the sometimes deplorable treatment of women in the country. However, this hasn’t deterred Colombian women. The establishment of a Sub-Commission on Gender in the peace negotiations between the Santos administration and the FARC in Havana, Cuba, is a prime example of their immaculate resilience.

It took several steps to accomplish this achievement. In October 2013, 450 women from all over Colombia met at the National Summit of Women and Peace to convince the government to include women in the peace process. Santos then announced, in a historic move, the participation of two women with decision-making power in the government’s negotiating team.

In August 2014, the talks opened space for victims to participate directly in the peace process. Delegations of victims, which included thirty-six women, started traveling to Havana to express their concerns to both parties at the table. Women have accounted for sixty percent of the total participants. Despite this, experts say that women at the table have struggled to convince the negotiating parties that women’s issues are central to the accord’s success.

The preliminary peace agreements seem to be reflective of UN Security Council Resolution 1325 and the subsequent resolutions related to women, peace and security. Assuming that peace is signed, the final peace accords need to guarantee that women’s rights become integral to post-conflict reconstruction. Having women at the table does not guarantee a “gender-sensitive peace.” The way forward should embrace the following recommendations:

As the March 23 deadline to sign the peace accord approaches, special attention must be directed toward ensuring that women do not fall prey during the transitional justice process. But there also needs to be space for women at the table as true decision-makers and power brokers. Not just because that’s the “right” thing to do. The facts speak for themselves: there will only be lasting peace for Colombia if women take center-stage.