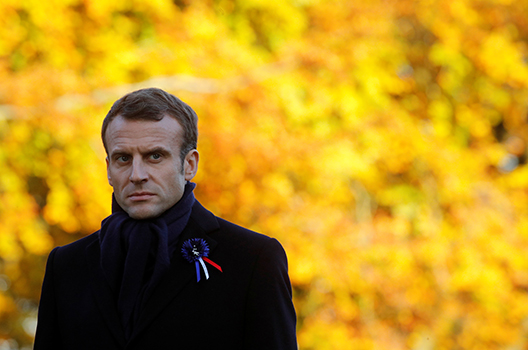 French President Emmanuel Macron arrives to attend a military ceremony with Britain's Prime Minister Theresa May (not seen) at the Franco-British National Necropolis in Thiepval, near Albert, France, November 9, 2018 as part of a World War One commemoration tour. (REUTERS/Philippe Wojazer)

French President Emmanuel Macron will welcome world leaders to Paris this weekend to commemorate the 100th anniversary of the end of World War I. The event will provide Macron with an opportunity to flex his foreign policy muscles, specifically to reaffirm his position as a leading supporter of the European Union (EU) and, more importantly, a champion of liberal democratic values.

Eighteen months after an election victory that was touted as a major defeat for populism in Europe, Macron faces growing public discontent at home. A series of key resignations from his government in early fall—compounded by his own struggle to refill these posts—raised questions about his leadership style, particularly his reported tendency to micromanage his ministers.

Rising fuel costs have compounded Macron’s domestic challenges leading to widespread protests, overwhelmingly supported by a notoriously restive French public. Public support for Macron is crumbling. This has lent valuable political capital to a resurgent far-right leader Marine Le Pen and her new National Rally party. According to a recent opinion poll conducted by Ifop, support for Macron’s En Marche has fallen to 19 percent, while the National Rally now stands at 20 percent.

Furthermore, Macron’s recent comments describing French Gen. Philippe Pétain as a “great soldier” are likely to worsen his image in France, especially in more nationalistic circles. Pétain, leader of the Nazi-backed Vichy government in France during World War II, is reviled by many as a Nazi collaborator and anti-Semite.

And so the arrival of foreign leaders in Paris on November 11 presents Macron with an opportunity to use the oft-tested political tactic of masking domestic failings with foreign policy success.

The underwhelming performance of Germany’s Christian Democratic Union (CDU) in the recent state elections in Hesse, and longtime Chancellor Angela Merkel’s consequent decision not to continue in the chancellorship past 2021 leaves a void in the role of de facto leader of Europe.

It remains unclear who will succeed Merkel in Germany and whether that person can command her level of influence. That leaves Macron in a position to inherit the mantle of European leadership and defender of liberal democratic values (at least in the short-term).

Outside Europe, there are several key issues on which Macron can potentially take the lead. On Syria, Macron has boosted France’s long-term role by participating in a recent four-way summit between Germany, Russia, Turkey, and France in Istanbul. The purpose of the summit was to outline a plan for post-war reconstruction of Syria. While the leaders remain hotly divided over the future status of Syrian President Bashar al-Assad, Macron’s presence ensures a French influence in the proceedings and potentially bolsters the country’s relationship with a post-war Syria.

The Paris climate agreement provides another opportunity for French leadership, particularly with US President Donald J. Trump’s decision to withdraw the United States from the accord. Indeed, Macron has already demonstrated in the past that he is willing to butt heads with Trump over the issue, while at the same time enjoying a sometimes collegial relationship with the American president.

There is, however, deep skepticism about Macron’s ability (and willingness) to undertake the mantle of European leadership globally, but the first public congregation of EU leaders since Merkel’s announcement provides him with a crucial opportunity to present himself as the voice of pro-EU sentiment within the Union.

In the medium term, Macron’s ability to promote and defend the EU will be tested against the backdrop of the final realization of Brexit and crucial European elections in May as anti-EU parties continue to gain steam across the continent.

The opportunity to step into the role of de facto leader of Europe presents an inherent challenge. Macron will likely become a target of scorn for populists across Europe who will invariably use his failures as a symbol of the flawed European project as a whole.

Nevertheless, Macron has a valuable opportunity to project his image both externally and internally as the champion of liberal democratic values. This could help stabilize his standing at home and, perhaps more importantly, re-mobilize the more centrist, pro-European elements of French society that supported his election in 2017.

Daniel Haverty is an intern with the Atlantic Council’s Millenium Leadership Program.