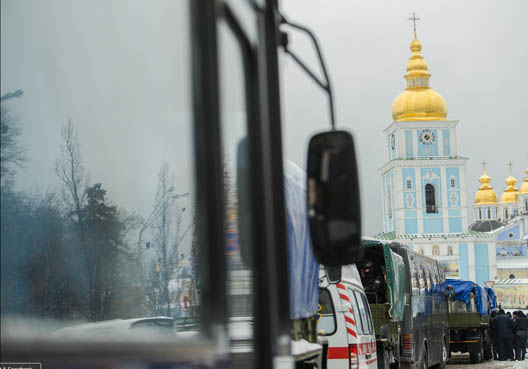 Why do despots invariably have such atrocious taste?  Ukrainians wandering wide-eyed through the palace outside Kyiv of fugitive Ukrainian President Viktor Yanukovych simultaneously marveled and gagged at the gilded furniture, stuffed dead cats and gold bathroom fixtures. But their elation at overturning their corrupt, if elected, president could fade quickly if Russia’s elected, if authoritarian, president Vladimir Putin decides that Ukraine cannot be allowed to turn west in its political and economic orientation.

Like the Soviet leaders he resembles, Putin seems desperate to retain what remains of Russia’s regional and global influence. That is presumably why he backed Yanukovych all these years, mobilized troops Wednesday on the border with Ukraine for military “exercises,” and appears to have given the Ukrainian president safe haven in Russia.  It also explains, in part, Putin’s refusal to end Russia’s support for the blood-stained Syrian dictator, Bashar al-Assad.

Before the Sochi Olympics, some in the West speculated that a successful, terrorism-free Games would increase Putin’s self-confidence sufficiently that he would soften policy toward Ukraine and Syria. One positive outcome was Russia’s agreement – on the eve of the closing of the Olympics – not to veto a U.N. Security Council resolution that urges all sides in Syria’s civil war to allow humanitarian access to civilians for the delivery of urgently needed food and medical supplies.

The resolution – the first the Russians have allowed in three years on Syria – also demands that combatants “cease all attacks against civilians, as well as the indiscriminate employment of weapons in populated areas, including shelling and aerial bombardment, such as the use of barrel bombs, and methods of warfare … to cause superfluous injury or unnecessary suffering.” It threatens “further steps” if the resolution is not implemented but does not specify what those might be.

However, Russia’s behavior at recent Geneva talks showed no diminution of support for Assad in contradiction to Russia’s previous agreement requiring multilateral negotiations to focus on a post-Assad political transition. The tribulations of the Yanukovych government in Ukraine could make Putin even more loath to jettison his old ally in Syria.

Russia is right to be concerned about the character of the Syrian opposition and the rising profile of Sunni militant groups. However, by refusing to shape a new government for Syria, Putin and his diplomats are insuring that the civil war continues to act as a magnet and school for jihadists from his own country as well as elsewhere in Europe and the Middle East.

According to U.S. Director of National Intelligence James Clapper, there are now more than 7,000 foreign fighters in Syria opposing the Assad regime.

Vitaly Naumkin, director of the Institute of Oriental Studies at the Russian Academy of Sciences, has written that hundreds of people from Russia have joined the Islamic State of Iraq and al-Sham (ISIS) and other jihadist groups. They include ethnic Russians and 250 from the restive province of Chechnya alone. There are fears that some may return to Russia to commit terrorist acts, such as the bombings that preceded the Sochi Olympics.

The longer the war goes on, the more Syria will become a hothouse for extremism and violence and the bigger the political vacuum will become.

A four-month study conducted recently showed that the Syrian government and the externally-based opposition – which failed in Geneva to come to any accommodation – together have the support of less than 15 percent of the residents of Aleppo, Syria’s most populous city. ISIS controls a fifth of the city’s neighborhoods, the study said, although it has alienated many Syrians and is being confronted by other Islamic groups, including al-Qaida’s official affiliate in Syria, Jabhat al-Nusra (the Nusra Front).

David Kilcullen, founder of Caerus Associates which organized the study and an Australian counter-insurgency expert and former aide to retired Gen. David Petraeus, said at a Washington forum earlier this month that Nusra is using tactics perfected by groups such as Lebanon’s Hezbollah to attract  support by providing social services to those under its control.

“If al-Qaida and Hezbollah had fallen in love and gotten it on, their love child would be Jabhat al-Nusra,” Kilcullen said.

While no country is volunteering troops to pacify a collapsing Syria, the international community cannot allow the war to go on indefinitely. Despite generous contributions from the United States, the price tag for caring for refugees is too high and the ramifications of a lost generation of young Syrians too frightening to contemplate.

Somehow Putin must be convinced that Russia will ultimately lose more than it gains through association with unsavory regimes like those of Yanukovych and Assad. Gilded palaces cannot protect such men from the wrath of their people – and those who are brave enough to rise up will remember who sided with and against them.