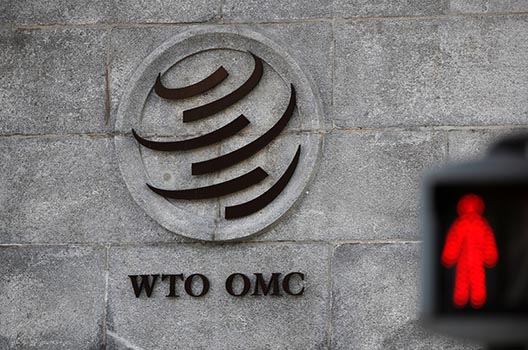 The World Trade Organization (WTO)’s appellate body—part of the WTO’s dispute settlement system, once considered “the crown jewel” of the global trading system—is facing an existential crisis. The United States is blocking any new appointments to the body to force its members to update the WTO rulebook and address its concerns and to limit its judicial reach. While Washington’s path to achieve change is highly disruptive, many of the US administration’s points of discontent are shared by other members who agree that the WTO is in urgent need of reform.

Usually a body of seven, the appellate body has recently been reduced to three, the minimum number to decide a case under current rules. By December 2019, only one member will remain as the terms of two members expire. Without new appointments, the body would be made unfunctional.

Marie Kasperek, deputy director of the Atlantic Council’s Global Business & Economics Program, sat down with Ambassador Alan Wm. Wolff, deputy director-general at the WTO, to discuss the prospects for a resolution of the crisis, the re-occurring threat of the United States to pull out of the global trading body all together, and the potential significance of a Sino-US trade deal for the WTO rulebook. Here is an edited transcript of their conversation:

Marie Kasperek: How important is the appellate body to the WTO and the global trading system?

Ambassador Alan Wm. Wolff: The dispute settlement system of the WTO of which an appellate function is an integral part, is a vitally important part of the WTO. The WTO is differentiated from other international agreements and organizations by being enforceable: it is not just hortatory; there are binding contractual commitments; countries are held to their word and the dispute settlement system determines when they can be required to adhere to their obligations. The system is designed to work with an appellate function.  It can assure that egregious errors by panels, should they occur, are corrected.

Kasperek: What happens if there is no solution to the current appellate body crisis by December? Is there a plan B?

Wolff: There is no existing plan B that has been embraced by the membership or even formally tabled. Countries which are in litigation do have a number of choices if there is no appeal possible under existing procedures. They could agree that the panel is final if there is no ability to appeal to an appellate body. They could agree that they could have arbitration at that point. They could agree to have the director-general provide what are called “good offices”—meaning help to resolve a dispute. Or they could resort to other forms of mediation. While there are a variety of options, they all are second-best to having a standard appellate appeal process in place, in which members have faith in, that is it going to interpret the agreement and yield a fair result.

Kasperek: What does this mean for cases that are now before panels at the WTO?

Wolff: If the appellate body does not exist, and in absence of a short-term fix or ad hoc fix, there is no finality to any case because a panel decision is not final if it is appealed. If there is no appeal possible the results of panel decisions can be in a sort of limbo. In some cases the winning party may resort to retaliation against a party that refuses to change the measure complained of.  This can be followed by the other party’s counter retaliation. This is negative for world trade, negative for the countries involved, and can lead to less certainty, less trade, and a greater degree of chaos absent of various fixes and those fixes are not yet determined.

Kasperek: Is there any hope that the situation can be resolved before the December deadline?

Wolff: Yes, the concerns of the United States have been detailed extensively, and the other members are aware of them. Now they are reacting and seeking to find solutions. In addition, there is an experienced and talented facilitator who has been named by the chair of the General Council (the highest body of the WTO) to consult with members and try to find a middle ground. This process is underway and there is no reason to believe that it cannot come to a successful conclusion.

Kasperek: One other scenario would be that US President Donald J. Trump makes true on his threat to pull out of the WTO all together…

Wolff: The United States is a highly active participant inside the WTO and is presently making proposals for reform, as are other members.   There is no formal indication given of any kind that the United States is considering withdrawing at this point. It does state emphatically that it wants to see changes made, and has been detailing the changes it desires.

Kasperek: To me, this is exemplified by the fact that the United States is still regularly bringing cases to the WTO. So is the negative rhetoric simply that: words that won’t be followed by action?

Wolff: The United States is deeply engaged in the work of the committees of the WTO and is putting proposals on the table in a variety of areas, for example, with respect to  obtaining greater transparency, to ensure that countries live up to their notification obligations. The United States is working with other members to develop additional proposals. So, there is every evidence that the United States, as stated by President Trump, actually intends make the WTO better.  It is unwise to dismiss entirely any major country’s threats.

Kasperek: Currently the negotiations between the United States and China are very much ongoing and maybe even close to a deal, but the enforcement of any potential deal is currently envisioned at a bilateral level. Does that have any implications for the WTO? Are members even allowed to choose that path if they are members of the WTO?

Wolff: If any member is concerned with what another member does, it has a series of options.  It can request  consultations directly with that party, it can bring up the subject in any of the relevant meetings at the WTO, and it can challenge a measure in WTO dispute settlement if in its view a measure is contrary to the WTO’s rules.   Something it wishes to challenge . Countries are free to try to protect their interests within the WTO framework in a variety of ways if they feel aggrieved.

Kasperek: Could there also be something positive coming out of a China-US deal for the WTO? Could you potentially see an agreement between them push forward reform in the WTO?

Wolff: They are the two largest trading countries in the world. If they come up with a series of areas of agreement that have potentially broader applicability, that might be good as rules for others, my hope would be they bring them into the WTO and propose them.  If  the US and China propose something jointly…if they propose something that seems to make sense to the membership, it would have a decent chance to be broadened to be included in a multilateral agreement.  My hope is that they can make some progress in areas that are not well covered by the current system, and make proposals for positive change.

Wolff: There have been discussions on how state-owned enterprises conduct commercial competition. There is undoubtedly discussion on protection of intellectual property, and there is no doubt discussion about the use of industrial subsidies. If the two countries come up with rules that make sense broadly, which one would think they may be trying to do, then bringing some of their areas of agreement into the WTO would make very good sense. To become a rule, these proposals would then need to be adopted by the membership as a whole.

Marie Kasperek is deputy director of the Atlantic Council’s Global Business and Economics Program. Follow her on Twitter @TheTradeShop.