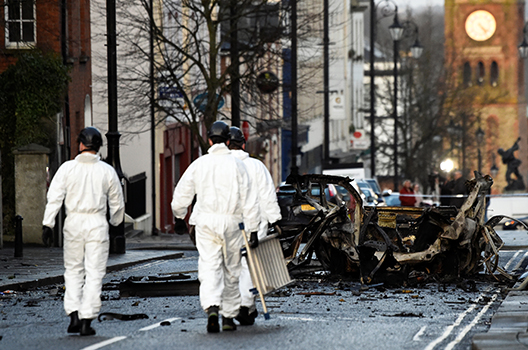 There is uncertainty everywhere. In the Northern Irish city of Londonderry, police carried out a controlled explosion of a hijacked van and evacuated houses in the Creggan area less than forty-eight hours after a bomb exploded outside the city’s courthouse—luckily, with no casualties.

Parliamentary exchanges on January 21 were spattered with references to the courthouse bomb and to the vexed issue of the Irish backstop, the mechanism agreed by the United Kingdom and the European Union to ensure that the current frictionless border between Northern Ireland and the Republic—a key ingredient of the Good Friday Agreement of 1998 that ended thirty years of violence in Northern Ireland—will remain in place after the UK leaves the EU.

British Prime Minister Theresa May prefaced her latest parliamentary statement on Brexit with a brief reference to the bomb blast on January 19, stating: “We will make sure we never go back to the violence and terror of the past.”  But she kept that comment strictly separate from the actual Brexit statement.  Responding to questions later, however, she dismissed weekend press reports that her office was examining proposals to remove or replace the backstop through a new treaty with Dublin or revision or augmentation of the Good Friday Agreement (signed in Belfast in 1998) that ended Northern Ireland’s “Troubles.”

“I have never even considered reopening the Belfast Agreement,” she told a crowded House of Commons.

As for the much-touted concept of putting her own deal, or no deal, to a fresh referendum, she argued: “A second referendum would damage social cohesion by undermining faith in our democracy.”

In the wake of last week’s momentous defeat of the Brexit agreement May negotiated with the EU over eighteen months, the prime minister promised to open her doors to opposition politicians to try to build a cross-party consensus. But she didn’t appear to budge on any substantial issue. She wouldn’t take a no-deal Brexit off the table, nor would she consider a customs union or other proposal suggested by various opposition figures. But the case for either of these options was not helped by the fact that the most important opposition figure, Labour Party leader Jeremy Corbyn, pointedly declined to take part in even the briefest of discussions with May.

Brexit Committee Chairman Hilary Benn, one of the Labour politicians who did meet with May, summed up those discussions when he told Parliament on January 21: “While her door might have been open, her mind remained closed.”

May’s statements on January 21 made it quite clear that the prime minister’s strategy is to win over her own Conservative Party rebels, the Democratic Unionists of Northern Ireland, and a handful of opposition votes in order to secure a small majority in the 650-member House of Commons. But that means she will have to resolve the backstop conundrum to the Brexiteer rebels’ satisfaction, and, as yet, there is no real indication as to how she might be able to square that particular circle.

May doesn’t have to just deal with Parliament, she also has to address the practicalities of her Brexit plan. This was particularly highlighted by one issue on January 21. In the morning, British Future, a think tank, issued a report to mark the fact that this is the first day of the test phase for the UK government’s program to register EU citizens working in Britain.

In the afternoon, May announced that she was scrapping the £65 (about $83.50) application charge for EU citizens to register.

But the prime minister did not address the report’s major assertion that government preparations to handle as many as 3.5 million prospective applicants risk a major disaster. British Future says perhaps as many as 30 percent of these EU citizens might be unaware that they have to apply for residency or would struggle to provide the evidence or prove unable to negotiate the bureaucracy required to gain residency. The full program is currently due to be rolled out on March 30, the day after Britain’s currently scheduled departure from the EU.

On  January 29, May is due to present Parliament with a “neutral” resolution concerning the way forward, a motion eligible for amendment. But May persistently declined to say on January 21 whether she would actually implement any amendments that Parliament might pass, such as a move to prevent a “no deal” Brexit, or ensure a customs union, or approve a fresh referendum. Her response was to say that proponents of such ideas were making assumptions concerning parliamentary approval for the various proposals.

There’s a paradox now. The prime minister needs these alternatives to be taken off the table so that her deal, or a mildly revised version, is the only option left. But to do so, she actually has to have the alternatives tested by Parliament.

This may happen next week, though much will depend on which amendments House of Commons Speaker John Bercow chooses for discussion when the House debates May’s neutral resolution.

Only by giving Parliament the chance to vote on these issues—and then in the hope that the House votes them down—does May seem to have a realistic chance of cobbling together a majority for a revived, or revised, version of the deal that Parliament rejected 432 to 202 votes on January 16.