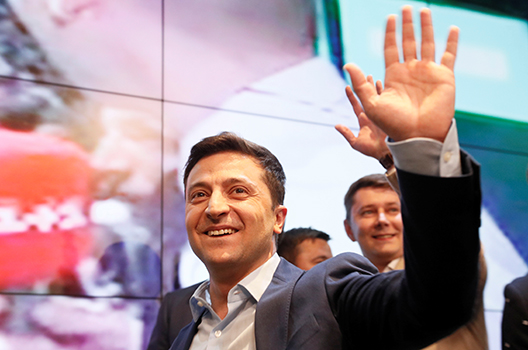 Following his landslide election as president of Ukraine, Volodymyr Zelenskiy must now turn his attention to following through on much-needed economic and anti-corruption reforms, all while continuing to confront Russia in Ukraine’s east and the illegal occupation of Crimea.

The results of the April 21 contest, which saw Zelenskiy beat incumbent president, Petro Poroshenko, with nearly three-quarters of the vote was “clearly a vote for change,” according to Atlantic Council Eurasia Center Director John Herbst, who is a former US ambassador to Ukraine. Zelenskiy cannot be content with the margin of his victory, Herbst added, as “Poroshenko’s 2014 first round victory was also unprecedented and he was very popular at the time he won” before experiencing a decline in popularity.

“To consolidate power,” Herbst said, “Zelenskiy must move on reforms.” Adrian Karatnycky, senior fellow and co-director of the Ukraine in Europe Initiative with the Eurasia Center, agreed, explaining that the “mandate in the second round was less for Zelenskiy than for hope for a change of course.” He argued that the Ukrainian public will be “looking for rapid results in terms of movement against corruption, potential economic improvements, and perhaps some progress in dealing with the Russian threat.”

The fact that most voters were motivated by disappointment with Poroshenko, rather than excitement for Zelenskiy “means that Zelenskiy cannot expect any benefit of the doubt,” according to Atlantic Council Senior Fellow Anders Åslund. “There is no euphoria about Zelenskiy as a person,” he added. “There is a quiet rage against the old corrupt establishment.”

Herbst, Karatnycky, and Åslund spoke on a members and press call hosted by the Atlantic Council on April 22.

Zelenskiy will be somewhat handicapped in the short term, Åslund noted, as parliamentary elections will likely not happen until October 27.

“He will have six months when it will be hard for him to deliver because he will deal with a parliament that has its own agenda,” Karatnycky added.

Åslund explained that Zelenskiy could act quickly on nominating a new prosecutor-general and anti-corruption prosecutor to begin to fulfill some of his campaign promises before a new parliament is elected.

Karatnycky thinks that Zelenskiy “has enough support [to lead] one of the two largest factions in [the new] parliament,” which will give him a better chance of enacting serious reforms.

Zelenskiy’s biggest immediate challenge, however, will be the continued war with Russia in Ukraine’s east. “Zelenskiy is a neophyte and that is a serious problem when you are dealing with a character like [Russian President Vladimir] Putin,” Herbst said. The Kremlin “will be probing or testing Zelenskiy in the weeks and months to come,” Herbst said, as they will attempt to exploit his lack of political experience.

According to Herbst, “Putin was hoping that this election might make it easier to push Ukraine away from a pro-European orientation.” Despite indications that Zelenskiy might want to change the tactics pursued by Poroshenko, Herbst maintained that the new president “is not interested and certainly would not be able to make a deal [with Russia] that in any way cuts against Ukrainian sovereignty. Because the people of Ukraine will not stand for it.”

Karatnycky added that “Zelenskiy’s recent profile in the last days of the campaign took some of the bloom off of [Russia’s] expectations that this guy might be someone who will be eager to make some bows in the direction of Russia. That seems to have faded from their calculations.” Åslund noted that Moscow declined to congratulate Zelenskiy on his electoral victory, in a departure from usual Kremlin practice.

Zelenskiy’s inexperience could prompt further Kremlin action and he would certainly benefit from closer cooperation with Ukraine’s Western allies, the experts said. Karatnycky suggested that the United States and Europe “could ramp up some technical assistance to help [Zelenskiy] shape the transition, connect him with Western experts, and begin a dialogue.”

Åslund praised the European Union’s decision to invite Zelenskiy for a summit in Brussels in early July and hoped the United States extends a similar invitation. The support will be needed, Herbst argued, as “a Russian provocation, I think, is to be expected.”

Herbst reported that the although “the amount of disinformation” from Russia during the electoral campaign “has been overwhelming and constant,” evidence suggests that “Moscow has actually been less active than we expected.”

The Atlantic Council, together with the Victor Pinchuk Foundation and the Transatlantic Commission on Electoral Integrity, has been leading a Ukrainian Election Task Force to identify and expose foreign efforts to interfere in Ukraine’s elections since last Fall. Herbst explained that most of the disinformation was focused on accusing Poroshenko of being a fascist, exposing the inexperience of Zelenskiy, and arguing that the elections were fundamentally illegitimate. Herbst also noted that Russian hackers “tried to get into the system of the Central Election Commission of Ukraine. That effort failed because of excellent cooperation between the United States and Ukraine.”

Importantly, “the fact that [Russians] have not intervened in a large evident way in the presidential elections does not mean that they will stay their hand in the parliamentary elections,” according to Herbst. Given the importance of the parliamentary elections for the future of reform in Ukraine and strengthening of defense against Moscow, it will be vitally important for the West to continue to help Ukraine defend against possible interference in its elections as it continues its struggle for sovereignty.