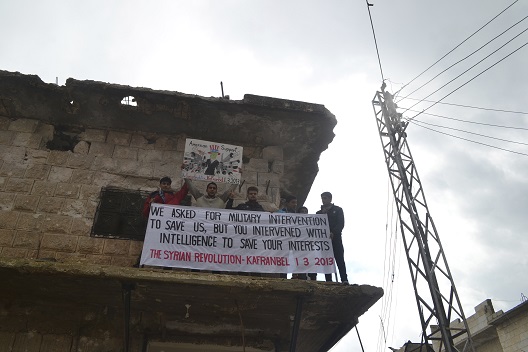 I first met Raed Fares in November 2015 when he spoke at an event hosted by the Atlantic Council in Washington, DC. I had learned about his work as an activist however much earlier in the Syrian conflict, especially his role in organizing local sit-ins in his northern Syrian town of Kafr Nabl. Locals were regularly photographed holding banners bearing witty English slogans to raise awareness of regime and extremist violence and shame the international community into taking action (that the slogans were often written in broken English somehow made them more endearing). Raed also founded Radio Fresh, whose broadcasts frequently criticized the local al-Qaeda derivative Hayat Tahrir al-Sham (HTS) who likely murdered Raed five days ago.

By the time I finally met Raed, I had studied the Syrian conflict from a US policy angle for several years. Despite, or perhaps because of, my being a native of the Levant with Syrian roots, I had always felt conflicting emotions when I thought about people like Raed—that is, activists who took great personal risks to effect change at the micro-level. While Raed and countless less famous Syrian activists knew their country better than I ever would, many on the outside struggled to see how their plight was processed in Washington, which is ultimately where their fate was being decided.

This gap in understanding said far more about the US policy world than it did about Syrian activists. Yet I am ashamed to say I sometimes found Raed and others—with their unrelenting stubbornness in the face of violence and US indifference, and their insistence on grass-roots activism and incremental change—both inspiring and irritating. Raed’s moral outrage at what was happening to his country was the direct opposite of the amorality and occasional cynicism of the Washington analyst class. In my view, Raed just didn’t “get it”: moral indignation was not going to save Syria. More importantly, in Washington it is not good form or at least not very efficient to be morally indignant about Middle East wars. Raed was an unwelcome reminder of that depressing fact.

This was of course just egoism on my part. When I was fortunate enough to finally meet Raed I saw that he knew exactly what was going on around him: if the international community was not going to save his country, that was unfortunate but not the end of the world since that was his job and that of others like him. Nothing about Raed was irritating in person. Quite the opposite: he had charisma, street smarts, and a wicked Levantine sense of humor. In fact, Raed struck me as a man with zero illusions about anything at all, including the fragility of his existence. Assassins had tried and failed to kill him once, torturers had detained and beaten him, and Kafr Nabl was always at risk of regime attack. He knew all this, yet he persevered.

When I learned of Raed’s murder I felt a sense of nauseous dread. Sadly, I was also not at all surprised. Following his remarks at the Atlantic Council in 2015, he had come under threat from extremists who took issue with his unflattering comments on their ideology and practices (delivered to an American audience in Washington DC, no less). This caused a temporary panic over a Friday midnight as my colleagues and I scrambled to take his comments offline. I was amused to learn that a few weeks after his return to Kafr Nabl, Raed had returned to his old agitating ways despite the risks he faced.

To say that Raed is a braver person than I am is a gross understatement. To say that people like him are going to save Syria is unfortunately an overstatement. Only power politics will create the space for people like Raed to fully flourish. But without Raed and the moral compass he provides, those of us on the outside are at constant risk of the self-indulgent cynicism that leads to strategic and moral failure abroad.

Faysal Itani is a resident senior fellow at the Atlantic Council’s Rafik Hariri Center for the Middle East. Follow him on Twitter: @faysalitani.

Image: Photo: Demonstrators stand atop of a building with banners during a protest against Syria's President Bashar al-Assad, in Kafranbel, near Idlib March 1, 2013. REUTERS/Raed Al-Fares/Shaam News Network/Handout