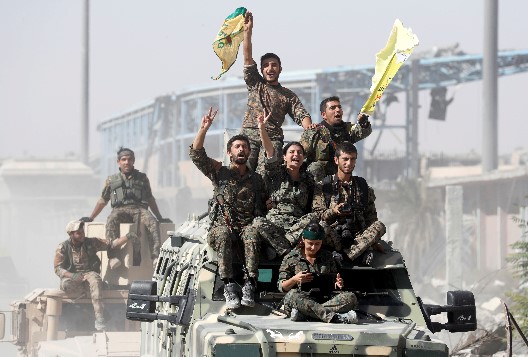 On January 18, Secretary of State Rex Tillerson offered some long-awaited clarity on US policy in post-ISIS Syria. As recently as a few weeks ago some observers (including this author) did not believe the United States would stay in Syria at all after defeating the Islamic State (ISIS, ISIL, or Daesh). Secretary Tillerson presented an ambitious US policy to be advanced by an indefinite US military deployment in areas of Syria taken from ISIS, supporting tens of thousands of local militia fighters dominated by its Kurdish partners against ISIS, the PYD.

The new policy seeks nothing less than the lasting defeat of ISIS; creating conditions for the return of Syrian refugees; eliminating the regime’s weapons of mass destruction; diminishing Iran’s influence; and ending the Syrian civil war through “a UN-led political process, and a stable, unified, independent Syria, under post-Assad leadership… functioning as a state.” This new policy was welcomed by some who had opposed President Obama’s general disinterest in competing with Iran, or taking military steps to advance a political settlement in Syria. The question remains: are these five goals achievable with the stated means?

An open-ended US deployment in northern and eastern will keep ISIS weak, making this the simplest goal. It is not clear that this deployment would compel Bashar Assad to give up whatever weapons of mass destruction he retains, seeing as he had used them while US forces were already operating in Syria. Refugees might be encouraged to return to an American security umbrella, though they will weigh this against expectations of how the autocratic PYD-led authorities would treat them.

Would consolidating the current PYD-controlled protectorate in Syria diminish Iranian influence? If the United States is prepared to use deadly force to protect its borders, then it can certainly block further Iranian geographic expansion. However, this may not prevent Iran’s further entrenchment in ‘useful Syria’—the country’s economic and demographic core in the West—unless the protectorate is used as a launching point for US-supported anti-Iranian operations (which is possible, but has not been mentioned publicly). Attacking regime forces would also by association weaken Iranian influence, but could provoke a confrontation with Russia, to which there is deep, institutionalized opposition in the US government and military that goes beyond President Trump’s affinity for Vladimir Putin.

One could argue that the very presence of US troops adjacent to Iranian-controlled Syrian territory presents a nuisance to Iran, which is correct. But Iran also has a say in how it reacts to this nuisance, including almost boundless commitment, and an array of escalation options including its nearly-perfected art of asymmetric warfare. If US soldiers begin dying in a confrontation most people in the United States have scarcely heard of, would a US president who has dismissed the entire Syrian issue as marginal counter-escalate hard enough and for long enough to win? President Trump is too unpredictable to say for sure, but if the United States is willing to fight a war with Iran over Syria, it is worth noting that starting it on US terms does not seem to be an option.

The final goal, resolving the civil war through a UN-led political process and a unitary Syria, is the most problematic. No serious person still expects Bashar Assad to negotiate his political monopoly away, having killed hundreds of thousands to preserve it. The proposal mentioned to decide his fate through elections is also odd: if free and fair elections are possible and Assad were to win, would that really reconcile his adversaries to living in an Assad-led Syria after all that has happened? And wouldn’t that strengthen Iran? Or would the United States punish him through sanctions, for example, thereby robbing the elections of their purpose? What happens if he loses? Would the United States and its Kurdish-led partners forcibly remove him?

Some of the US policy’s supporters believe that economic disruption can be used to pressure the regime to make concessions. The deployment would deprive it of important strategic assets including water, dams, arable land, oil, and border crossings. The slow suffocation of regime-held Syria and its inhabitants would indeed weaken an Iranian ally, but it is only defensible if it works. The problem is that Assad would sooner see Syria starve than share it. If it actually comes to that and the state collapses, that would be exactly the outcome policymakers (including this administration) have sought to avoid, lest they be saddled with the responsibility for a post-Assad Syria.

Since hurting Iran or Assad requires a more forceful approach and the US seems unwilling to deploy its own troops against their (and Russian?) forces, it will need highly capable and committed regional and local partners. For many reasons, there is no anti-Assad state equivalent to Iran. Saudi Arabia and the United Arab Emirates are no longer interested in regime change in Syria and would not be able to bring it about anyway. Egypt is an ally of Assad, and the pro-PYD US policy rules out any partnership with Turkey. There is no equivalent to Iran’s local militias, either: the PYD was effective at taking ground from ISIS but is not an appropriate vehicle for confronting Iran or the Syrian regime, since its enemy is Turkey and it has repeatedly cooperated and can coexist with regime and Iranian forces.

There is also the damage that establishing an open-ended US protectorate over PYD territory will inflict on relations between two NATO allies, the United States and Turkey. Turkish rhetoric, policy, and politics are deeply disturbing, but few countries would accept such actions from their allies. If the United States (and not merely factions in its armed forces) has decided this is no longer an alliance worth preserving, this merits a deeper discussion than the current one which roughly corresponds to: “They’ll get over it.”

Under President Obama, US policy in Syria was weak partly (although not only) because the Obama Administration was mindful not to derail its nuclear talks with Iran and had a general aversion to complex foreign interventions. President Trump’s stated Syria policy is forceful and ambitious, which has encouraged some who feel that just about anything is better than President Obama’s approach. There is now an obvious mismatch between means and ends, however. Weakening Iran and moving Assad out of power in Syria cannot be accomplished by deploying 2,000 US soldiers on its margins or betting on a local force that does not share US interests or priorities in Syria. Elections in the Syrian context are meaningless regardless of their outcome, and gradually strangling half of Syria economically to avoid confronting an immeasurably weaker opponent is not a defensible policy.

It is encouraging that US policymakers are thinking seriously about weakening Iran in Syria and changing the Syrian regime’s behavior. The apparent gap between means and ends, however, makes it difficult to endorse this new policy, at least based on the information available. The difficult truth is these goals can only be achieved by taking the fight to the enemy on US terms, finding or building partners that share US interests, and accepting the fight will be long and, crucially, costly in resources and quite possibly lives. Perhaps fighting ISIS is reason enough to establish a PYD-controlled protectorate in Syria. Others may advocate staying to reward the group for its help against ISIS. But ending the Syrian war and weakening a rising and robust regional empire will take far more ambition and resources. It will also require genuine buy-in from a president whose instincts seem to run against exactly this sort of commitment.