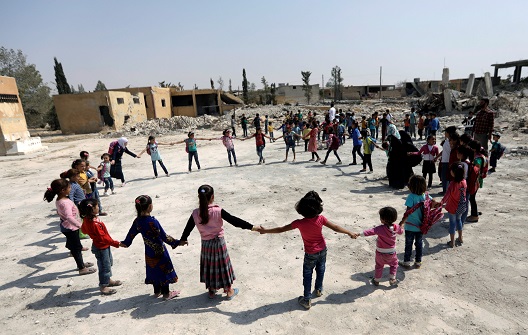 Syria’s situation—the massive amount of discussion, fragmented governance, and ongoing fighting—are not going to disappear anytime soon, and education models in Syria need to better adapt to it to address the growing learning gap. Although many organizations have programs to address education gaps for Syrian students, their approaches—focusing on access over quality, building traditional schools, supporting underground schools—are not the only way to keep Syrian students learning. These approaches sweep the following under the rug: the reality of politicized curricula by state and non-state actors, dangers the journey to and presence in schools pose, as well as the psychological impact of learning under threat, specifically in areas out of government control vulnerable to shelling and airstrikes. While education overhaul in Syria goes hand in hand with a seemingly-distant political solution, new models can keep communities connected to learning while minimizing exposure to threats in the current environment.

The biggest challenge is that schools are targeted, predominantly by the Syrian government and its allies, and subsequently require rehabilitation. Due to besiegement, underground schools in East Aleppo and Ghouta subject students to narrow spaces, prone to flooding, barrel bombs, poor circulation, lighting, ventilation, and mold. Research shows such conditions have an adverse academic and psychological impact and raises the question of how to build safe schools moving forward. Syrian children have since developed phobias to the idea of attending school due to these conditions and experiences. The use of checkpoints to search even school buses are one of the many tactics of humiliation and intimidation for students that has contributed to this phobia.

The fear and anxiety of students being separated from families in times of conflict hinders learning itself; therefore, when there is a risk of an attack, students should be kept closer to home. Local implementers in rural Damascus shared that the threat of an attack has pushed parents to rush to schools to recover their children, and this higher concentration of people has led to subsequent attacks and higher casualties. Still, education interferences have not been limited to airstrikes and shelling. With detention centers growing overcrowded, schools have been used as makeshift detention centers in Homs, Damascus suburbs, and Daraa. Based on interviews the author has conducted, witnesses claimed this was done by Syrian forces, opposition forces, as well as the Islamic State (ISIS, ISIL, Daesh).

In an emergency, UNICEF encourages communities to set up “temporary learning spaces” for use only six to eight weeks into the crisis or event. In the period that extends beyond this, communities are to “re-establish and/or sustain” learning spaces for long-term use. Given the conditions in Syria, this has not been the case. Predominantly temporary spaces exist in the tents of internally displaced people (IDP) camps in rural Idlib, packed with IDPs from East Aleppo, rural Hama, and rural Homs, accommodating students for years following forced displacement and migration. Therefore, the conditions have extended beyond the criteria of emergency education setting, yet, at the same time, have not been able to sustain a return to formal learning centers either.

Since these models are not addressing the rapidly shifting and increasing needs, it is time for educators and communities to collaborate to enhance them for the longer term, until safe school access is once again a reality, a core component of a political settlement. Any intervention must establish objectives and measurements of success that take into consideration pre-conflict rates and educational demographics.

In the author’s previous work in Homs and Idlib governorates, where forced displacement resulted in rural areas of up to twenty camps populated with IDPs, only a handful of reliable educational initiatives existed. This includes innovative models that distanced themselves from the framework of formal learning centers to refocus on the urgent needs of students; addressing severe trauma, drop-outs, and out-of-school children. To diversify the programming and address immediate need, one approach is to design a “mobile learning team.” This is a collective of education practitioners, engineers, mental health experts, nurses, architects, writers, and poets, all of whom are highly qualified and active in the communities the author worked with. Together, they will establish a team which provides mobile learning support. Creating this team will allow for many camps to be reached simultaneously, and, most importantly, communities, which are often segregated between locals, newly-settled IDPs, and settled IDPs, to collaborate and engage one another. This also prevents consolidating educators to one school for an extended period, but provides a creative approach to learning and engagement, a breath of fresh air that many Syrians, students and teachers alike, yearn for.

UNICEF invested in the design of the Self Learning Program, recently re-released, which is a modified version of the Syrian curricula that can be used for a more independent albeit not entirely “self-learning” approach. This is one curricula that could be used alongside psychosocial (PSS) and social-emotional learning (SEL) curricula. Mobile learning teams can also serve as a curricula evaluation committee for the Syrian curriculum currently used in nongovernment-held territory. They can help narrow down what should be included in learning sessions rather than aiming to follow textbooks page by page and falling short, at the expense of quality and an engaging learning experience.

When pursuing education initiatives on the ground, a collaborative approach to training should be employed. Due to a qualified teacher shortage, programs should elicit feedback and support not only from education practitioners, but also writers, nurses, mental health professionals, and engineers, for example, in content area relevant to their background. Playing an active, advisory role will equip programs with the pedagogical and professional skills needed for primary and secondary learners. When many key leaders and professionals in the area are supporting learning, community cohesiveness improves, and communities stay attached to a holistic approach to learning. Additionally, responsibility and accountability in education no longer lies only on the educators and education stakeholders, but rightfully on entire communities. Implementers on the ground have developed several community centers and teacher training initiatives in the area, so that improved trainings can be conducted. Resources are also increasingly available online in Arabic. Immense expertise and knowledge on the ground is needed for community learning to take place, ensuring that high-level donors are not required to maintain centers long term.

Life skills such as SEL, target the enhancement of knowledge and attitudes that can support relationship-building, decision-making, goal-setting, and emotional regulation, which should be a community priority. SEL has the potential to improve content-based performance as well. Academic performance with SEL is 13 percentile points higher than non-SEL learners and results last up to 3.5 years after some interventions. In addition, SEL supports student socialization, a key to wellbeing for individuals in working class and even middle-class communities without recreation activities; something applicable to vulnerable displaced communities in Syria now.

The social and emotional well-being of children, addressed through PSS needs, is critical to long-term development of Syrian children living in a fragmented environment. Some PSS and SEL programs exist, but not all adhere to internationally-recognized standards with extensive input from mental health and child developmental experts. This is crucial, as it is a disservice for existing regulated programs. When health centers and mobile clinics are set up, it is unacceptable for implementers to ignore guidelines for establishment and proper consultation of health professionals. Education initiatives that integrate SEL and PSS should be approached just as rigorously.

The availability of space for learning or programming of any sort for youth and children is another challenge. This is the case for areas out of government control since school buildings are either absent, in need of rehabilitation, or not sufficient for the number of children in need. For some Syrian children, reporting to a school may trigger trauma if they have experienced attacks in other school spaces. Therefore, it is an option to utilize other community spaces to build a more positive association with learning. This could be at family homes or even mosques.

The use of mosques can also double as a way to crowd out competitors for religious spaces such as ideological courses run by faith-based organizations. Tents are also more manageable when requested from donors, especially when they refuse to fund new structures or rehabilitate schools. Mobile learning teams are expected to conduct two to three hour sessions. When conducted in shifts in different camps, some double shifts and some simultaneously, should be manageable. The key message is that learning does not need to be out on hold when school buildings are not accessible; learning is not limited to schools, it can happen in spaces across the community.

While the criticism to this will focus on the difficult logistics, there must be an immediate joint responsibility recognizing that (1) children and youth need to remain connected to learning (which does not solely take place in schools) to maintain a healthy well-being (2) the need to keep students safe and in less-concentrated spaces that are prone to attacks. When this is communicated and prioritized, communities can bring forward solutions enthusiastically.

Some may argue that the management of such programs would be impossible to oversee in such a volatile context, yet at the same time attempt to replicate the pre-conflict formal schooling model, which only exists in poor form when stabilization is absent. Currently, it is best to modify expectations and narrow down the objectives of “learning” time. Designing mobile learning teams where community collaboration can disrupt the cycle of neglect towards youth, address children’s trauma, and prevent camps and communities from remaining segregated. The “toxic stress” reported by Save the Children shows loss of speech, aggression, anxiety, agitation, and confusion as common symptoms for children in these types of environments. Toxic stress is going to have a significant impact on any student’s learning with memory, comprehension, and facilitation of information. The ties between mental health and learning ability cannot continue to be disregarded.

Syrian children have demonstrated resilience in their ability to survive this conflict and maintain, from what has been witnessed by implementers, an ability to still find joy in learning. However, this resilience should not be taken for granted. Adapting to the current situation is what could truly build the next generation of students, often labeled a “lost generation,” yet are already on the path towards becoming a brilliant generation of thinkers, engineers, educators, advocates, community organizers, and linguists. When one meets a Syrian child in Turkey who has grasped the Turkish language under traumatizing conditions, without the support of teachers in a formal school context, this is no small feat. When children, even in fragile contexts, are given the tools to be creative, they have demonstrated they can and will deliver. The importance of evolving how local communities and implementers interpret education needs to better reflect local dynamics is something that education stakeholders should prioritize sooner rather than later.

Image: Pupiles play together in a playground of a damaged school in al-Saflaniyeh in eastern Aleppo's countryside, Syria. September 2017. REUTERS/Khalil Ashawi