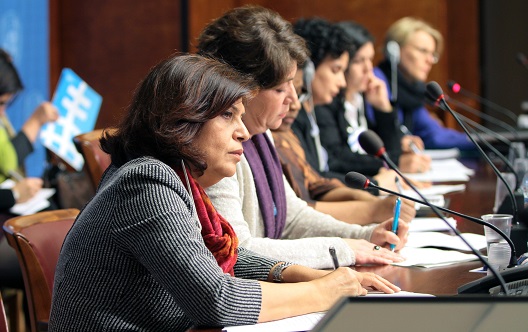 Since the start of the Syrian war in 2011, Syrian women have been involved in all aspects of the conflict: from fighting, demonstrating and documenting war crimes to providing humanitarian relief and local politics.

Syrian women, who make up more than 50 percent of the Syrian population, are also taking on a more active role in local negotiations to end the conflict that has killed more than half a million people and displaced millions more, including tens of thousands of females. However, women remain grossly underrepresented in international peace negotiations.

Women are disproportionately impacted by armed conflict, and thus are typically viewed as victims rather than actors with agency in peace processes and negotiations.

Early Syrian peace talks did not include women, or only included a select few. In 2016, U.N. special envoy for Syria Staffan de Mistura initiated a Women’s Advisory Board consisting of 12 Syrian women who serve as third-party observers to talks. He also pushed for increased female participation in 2017 peace talks, where women comprised nearly 20 percent of negotiators.

But recent Moscow-backed peace talks held in the Russian city of Sochi in early 2018 were sorely missing any representation of Syrian women.

Around 1,500 delegates attended the Sochi meeting, officially known as the Syrian Congress of National Dialogue, which aimed to diversify the range of Syrian voices at the table and jump-start a dialogue between Syrian government figures and opposition forces. While sources reporting on the event broke down the different ethnicities and political affiliations represented in Sochi, not one article referenced whether Syrian women participated.

The fact that the Sochi negotiations aimed to include a wide range of Syrian voices, but still excluded women, means the talks had failed right from the start.

Evidence shows that the inclusion of women in peace processes is essential to establishing lasting peace. A study from the Council on Foreign Relations found that including women in negotiations makes the agreement 64 percent less likely to fail. The same report showed that women’s participation in peace processes makes long-term agreements 35 percent more likely to last for at least 15 years.

Colombia provides an illustrative example. Women comprised one-third of the total number of negotiators and played an essential role in talks that led to a peace agreement between the Colombian government and the Revolutionary Armed Forces of Colombia (FARC) after more than 50 years of conflict. Women have also been proven to be significantly capable at bridging divides within highly polarized conflicts similar to Syria. In Liberia, for instance, Christian and Muslim women worked together to push differing parties to negotiate the end to the bloody civil war.

Syrian women also have been highly involved in initiating locally led relief and development work within the country. Women Now for Development is an organization led by Syrian women that empowers women to push Syria toward peace by promoting democratic values and resilience at the local level.

The impact and effectiveness of such initiatives at the local level has proven women’s ability as community peacemakers and further justifies the need for international stakeholders to guarantee Syrian women a place in international negotiating arenas. The international community, including the United Nations, must elevate Syrian women’s voices by directly supporting their local peace initiatives, which span ethnic and political backgrounds.

Establishing the Women’s Advisory Board was a step in the right direction by the U.N., but the peace process needs more substantial female participation before a solution to the conflict is foreseeable. U.N.Security Council Resolution 2254 (2015) states that the political process and constitution must be Syrian-led, and Syrian women must be counted among the peacebuilders. It is not only important to give women a place at the table, but it is also important to protect the voices of women peacemakers to ensure that they are heard and respected.

A January report from the Inclusive Peace & Transition Initiative recommended achieving broader inclusion through direct representation in negotiations, the roles of impartial observers or consultants, involvement in commissions and workshops, and soliciting contributions to public decision-making and civic action.

For Syria peace talks, this also means having female representatives from all ethnicities and political backgrounds represented in the Syrian constitutional committee. In post-Arab Spring Tunisia, the inclusion of women in the young democracy’s constitution-drafting process led to a more legitimate, representative constitution.

Women are an untapped source of potential and may be the answer for a peaceful outcome to one of history’s most polarizing conflicts. Women’s inclusion in today’s peace processes could spell equality in a future Syria, but peace will likely remain elusive if women continue to be sidelined.

This article originally appeared on Peacebuilding Deeply. You can find the original here. For important news about the war in Syria, you can sign up to the Syria Deeply email list.

Image: Photo: Four spokespersons for the nearly 50 participants at a two-day conference promoting Syrian women's participation in the Syrian politcal process sponsored by UN Women and the Netherlands present the outcome statement ahead of the "Geneva II" peace talks during a press conference on 13 January 2014 in Geneva. UN Women