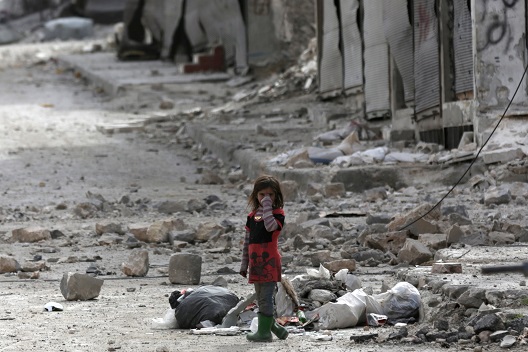 Caught in the sixth year of its interminable civil war, Syria today is beset by a combination of fleeting ceasefires, bombings, localized offensives, and meandering negotiations. Most of the country is controlled either by terrorist groups or by a weak, isolated central government in Damascus. Meanwhile, the United States finds itself in the midst of a dramatic political transition that is reverberating globally. In such an unstable environment, the question of actually rebuilding Syria may appear fanciful, abstract, or at the very least peripheral next to the issues of counter terrorism and humanitarian catastrophe.

Yet, effective reconstruction planning should be considered central to the eventual re-establishment of social, political, and economic order in a war-ravaged and divided Syria. It is a prerequisite not only for a sustainable peace agreement to take hold, but also for the long-term defeat of radical ideologies. The United States, its European and regional partners, and the international development community have an overwhelming interest in exploring pragmatic, feasible, and politically sensible options for social and economic rebuilding in Syria. Indeed, several European governments and international organizations, including the World Bank, have recognized this, though Syria’s unique circumstances require that conventional development models be adapted for Syria’s complex political and social contexts.

Waiting until the country is wholly at peace is both unnecessary and unwise. Even with a political agreement, localized violence would be unlikely to cease for some time, and while the overall damage and difficulty of the task grow every day, Syria’s capacity to recover diminishes precipitously. Planning for rebuilding—and rebuilding itself—should start as opportunities and needs present themselves. The immediate humanitarian benefits are obvious, but successful rebuilding can also lay the grounds for more stable, legitimate political-economic arrangements in parts of Syria, offer a model for larger-scale efforts where possibilities arise, and act as a potential incentive for warring parties to accept an equitable peace. To that end, the Atlantic Council is launching a new project titled “Rebuilding Syria: Reconstruction and Legitimacy” on March 21, 2017 at the Atlantic Council. Multiple country and functional experts will collaborate to craft and present just such a strategy to policy makers in Western and regional governments and international organizations.

There are a number of reasons for the US and the international community to begin reconstruction planning even absent a viable political solution in Damascus: First, the war may not yield political outcomes these parties would prefer to engage with anytime soon, namely a strong central government able to govern fairly and effectively with popular consent. Second, the development model for Syria need not and probably cannot be based on a strong, centralized state anyway. Even if the opposition were defeated, much of the country would remain outside effective regime control. The government will, in any case, lack the capacity to govern all of Syria for the foreseeable future. Nor would a classic, state-centric strategy necessarily be the wisest one even if it were possible: It is well known that in the past, the Syrian government privileged certain regions of the country over others in order to strengthen internal regime stability.

The resulting disparities and mismanagement were key factors in the outbreak of the 2011 popular unrest that eventually spiraled into war. There is no reason to believe a victorious Damascus-based central government would behave any more equitably today. In fact, it would probably act even more discriminatory given the need to consolidate its weakened position, rampant corruption, and warlord-ism, as well as the preference for rewarding loyalist communities for their sacrifices. Importantly, the immense refugee and IDP crisis must be addressed immediately to alleviate pressure on host communities, relieve human suffering and dislocation, and end the toxic long-term effect it is having on Syria’s potentially lost generation: uneducated, unemployed, and traumatized by violence. The most sustainable way to achieve this is to work towards creating the conditions for refugees and IDPs to return to their communities in Syria and for them to be able to meet their basic needs there.

The challenge is daunting, especially—though not exclusively—in opposition-held and highly-contested areas. More than half the country’s population has been internally or externally displaced, and some one million people still live in hellish conditions under siege. Millions of children remain out of school and millions more live in precarious circumstances. Housing in urban areas has been widely destroyed, nearly half the population cannot access healthcare, malnutrition is widespread, and diseases that had long disappeared from the Levant have recently resurfaced. The longer this situation is allowed to fester, the greater the risk of socio-economic unrest and radicalization. Meanwhile, the country’s economy has all but collapsed: GDP has fallen by half and a 2014 estimate measured damage to capital stock alone at $70-80 billion. The central government’s most recent budget proposal was one third the size of pre-war spending and almost entirely financed through foreign assistance. Manufacturing, extraction, and agriculture have largely ceased functioning, meaning the still heavily sanctioned country is now reliant on food, fuel, and raw material imports. This would be formidable even in a normal country at peace. Syria is neither of those things of course. The war brings distinct characteristics that immensely complicate rebuilding operationally and politically.

Any honest conversation about rebuilding in Syria raises difficult political questions. It could not take place in a vacuum. Attempts by the international community to cast it as wholly apolitical would be futile and would only generate suspicion. Reconstruction in a country in or emerging from a zero-sum civil war is unavoidably a political mission. The first issue is how to rebuild a country that is largely controlled by adversaries or enemies of the United States or its allies—some guilty of mass atrocities—such as the Assad regime, the Islamic State, and Jabhat Fateh al-Sham. Specifically, terrorist groups cannot be counterparts in a sustained rebuilding effort. The Syrian regime also remains opposed to meaningful peace negotiations and continues to use large-scale violence against civilians, jail and torture tens of thousands, and besiege population zones. The international community should not reward this behavior by investing in rebuilding Assad’s country through his regime as he continues to destroy it.

Recently, the Assad regime has embarked on a far-reaching public relations campaign seeking sanctions relief and international assistance, and thus recognition, for its ailing state. Meanwhile, al-Qaeda’s Syrian affiliate has increasingly inserted itself into public management and service sectors in rebel-held territory, operating its own public services administration that directly competes with Western-backed civil councils. The imperative of easing suffering and improving quality of life needs to be weighed against the danger of strengthening and legitimizing unsavory actors. One way to do this is to provide basic humanitarian aid wherever possible and regardless of political context, but target rebuilding at areas where regime authority has receded and terrorist groups are not in control. For now, these include some Arab and Kurdish opposition groups in the north and south of the country. While humanitarian aid can still be politicized by armed groups and other authorities, rebuilding would have to engage local actors as partners and owners of a fair and equitable reconstruction effort.

A localized rebuilding strategy would not rule out a broader one further down the line that benefits a greater number of Syrians and strengthens the legitimacy of the Syrian state. Development strategies aimed at meeting local needs by empowering local actors are compelling because they are scalable and replicable across Syria, if and when conditions allow. Crucially, functioning public services and provision of basic necessities at the local level are likely to strengthen political legitimacy and trust between rulers and populations and among the population itself, contributing to the larger stability of Syria. A long-term rebuilding plan would eventually have to reconnect local economies with a central government, even if ground-up work is emphasized in the shorter term. In fact, the very existence of a well-resourced, competent rebuilding strategy (and actual successful examples in parts of Syria) can be used to incentivize recalcitrant parties to seek an acceptable political settlement in exchange for benefiting, and act as a beacon of sorts to populations convinced that any alternative to monopolistic regime rule would be ruinous.

A strategic approach that accounts for political realities and consequences is crucial, but it is only the first step in ensuring a sustainable rebuilding effort in Syria. Over the coming months, “Rebuilding Syria” will focus the efforts of specialists drawn from multiple sectors and organizations to examine the many components of economic recovery and socio-political stability, including restoring infrastructure, utilities, healthcare, education, local administration, transportation, and other fundamentals. The war in Syria may continue to metastasize and peace may remain elusive, but Syria and the international community alike sorely need a pragmatic yet ambitious rebuilding program that seizes every opportunity to restore normalcy in the country whenever and wherever possible. Without one, the refugee crisis, terrorist threat, and the war itself cannot be addressed.

Faysal Itani is a senior fellow with the Atlantic Council’s Rafik Hariri Center for the Middle East. Tobias Schneider is an independent researcher focused on the political economy of conflict in the Middle East. He currently serves as a Consultant to World Bank.

Image: Photo: A girl stands amidst the rubble of damaged buildings in the northern Syrian town of al-Bab, Syria, February 28, 2017. REUTERS/Khalil Ashawi