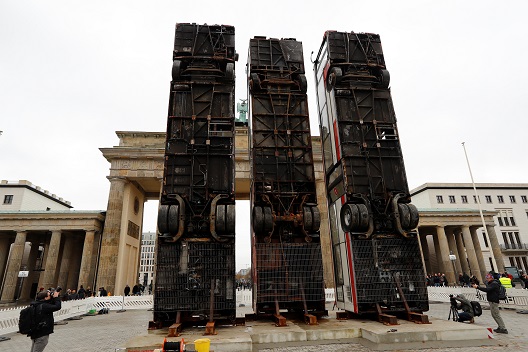 This past December marks one year since Aleppo fell back into regime control following six years of fighting and a bloody aerial bombing campaign. This put an end to the most violent theatre of war in Syria; marked by the departure of those expelled from Aleppo on the last convoy on December 22 to the western countryside. Russia proposed to various factions of the opposition that all fighters and civilians in areas under their control be evacuated to Idlib under Turkish supervision.

Opposition factions agreed to the Russian proposal realizing they were unable to win the military battle and lift the siege. This realization came following the failure of two command centers, Fateh Aleppo and Jaysh al-Fateh, in the two largest battles waged to lift the siege on Aleppo. This inability to lift the siege can be attributed to an imbalance in power between these factions and Syrian government forces, supported on every level by Russia and Iran. Armed factions made fatal errors in selecting sites of the first two battles in August 2016 southwest of Aleppo; an area heavily reinforced by regime military. The first of these opposition initiated battles failed and resulted in hundreds of casualties and loss of heavy weaponry. Losses grew as the battle spread to the outskirts of Aleppo, where the siege broke only on a very narrow road, to have the fighting end abruptly. The two operation rooms returned their attention to breaking the siege in the second battle, but were unable to achieve even half of what they had in the first battle. The second battle failed after the opposition lost men and heavy weapons.

This all took place years after the beginning of the battle of Dabib al-Naml which the Syrian regime started. Over its four-year course, the regime has been able to surround the city very effectively from its south-east to its north-west, as well as securing the Castello Road, the only remaining road connecting the city to the surrounding countryside. Scorched-earth tactics featured heavily in this battle, and the opposition had very limited resources to defend against these tactics; especially once the regime forces reached the north-east of the city and rendered the siege a fait accompli. It was also during these years that the armed opposition groups lost most of their elite fighters.

The opposition made other errors in their attempts to stop the regime imposed siege of Aleppo from progressing. The most significant of these mistakes was the infighting between the groups which prevented the formation of a unified military body in the city to at least coordinate military action in an area of Syria that witnessed intense fighting. This competition between groups was not only an impediment to the rebels’ progress, it was the most important factor behind the subsequent fall of Aleppo. In the last days of Aleppo’s resistance after a number of areas had fallen into the regime’s hands, the Noor al-Din al-Zenki Movement formed an alliance with Jabhat al-Nusra to wipe out the Fastaqim group (the largest military faction in the city). At this point, the opposition would have been able to hold out under the siege for more than a year had it not been for the attack on Fastaqim by Noor al-Din al-Zenki Movement and Jabhat al-Nusra. Indeed, prior to the outbreak of infighting in Aleppo, only five areas had fallen to the regime, but after the attack on Fastaqim the city’s other areas fell swiftly and steadily into the regime’s hands.

Another factor was the withdrawal of the larger armed opposition groups (Jabhat al-Nusra, Ahrar al-Sham, and a division from Liwa al-Tawheed) into the Aleppo countryside and then gradually to Idlib.  This began after the outbreak of fighting against the Islamic State  (ISIS, ISIL, Daesh) in early 2014, when Jabhat al-Nusra lost the majority of its fighters and weapons to ISIS. A large number of Nusra fighters pledged allegiance to the Islamic State, while Ahrar al-Sham retained only a few hundred of its fighters; mostly those who originally hailed from Aleppo. The same applied to Liwa al-Tawheed, which withdrew its forces from the countryside to the north of Aleppo after it came under attack from ISIS, an event which meant there was a front line shared by ISIS and the opposition which extended from the al-Musha School in northern Aleppo all the way to the Turkish border.

From the beginning of 2014 until 2016 with the start of the siege on Aleppo, the burden of defending the city fell on the shoulders of the other opposition groups, weaker in comparison to those that withdrew over time. These groups began to noticeably increase in number at the expense of the Free Syrian Army (FSA). This was the result of two developments which necessitated thousands of fighters: firstly, the increase in areas where battles were raging, and secondly, the presence of a frontline between the rebels and the regime within the city and on its southern and eastern outskirts.

These opposition groups attempting to hold back the regime’s advance did not succeed in forming a solid line of defense based on any sort of military engineering such as digging tunnels and trenches, consolidating guard posts to defend against aerial bombardment, and planting land mines ahead of the regime forces. For this reason, the regime was able to succeed every time in breaking through a weak front line, only for the rebels to forge another defensive line.  This pattern continued until the siege fell.

Limited support in terms of weapons, ammunition, and money from the Müşterek Operasyon Merkezi (MOM) joint operations room—made up of factions from the FSA and a group of countries supporting the Syrian opposition—also played its part. The support was not at all suitable for the size of the battles being waged by the rebels to defend the city. In fact, the weapons which the armed opposition groups received most of from the MOM operations room were TAW anti-tank missiles. By the time these missiles were reaching the rebels in late 2014, they were damaged and not fit for use. Similarly, most of the ammunition they received were only for light and medium-grade weapons.

The vacuum left by America’s isolationist stance in the conflict, which led directly to Russia’s military intervention seemingly as part of some international agreement, settled the battle for Aleppo in the regime’s favor. Modern Russian weaponry and air support proved decisive in numerous battles.

These were the most significant military reasons why Aleppo fell to the regime after years of battles and defeats. On the whole, the opposition has not benefitted from the departure of thousands of exhausted fighters from within Aleppo. If they had been able to leave the city without having taken part in needless infighting, with slightly higher morale and better organization, they would have been able to open new front lines either towards Hama or the coastal regions. This may have changed the balance of power on the ground in the conflict.

Politically speaking, the coalitions involved at that time were far from clear, except for the improving relations between Turkey and Russia as time went on. Many opposition supporters attribute the fall of Aleppo to the nascent agreement between Turkey and Russia, which was reached as part of a long-term deal struck by the two nations. At the time, Turkish forces were drawing near to the city of al-Bab as part of its Euphrates Shield operation, meaning that it was approaching a point of direct contact with the Syrian regime at a time when it did not want to clash with anyone except the Islamic State. At the same time, Turkey, alongside Qatar, had financed heavily the military support for the aforementioned first battle to lift the siege, achieved significant success in temporarily breaking it. This allowed Turkey to present itself to Russia as in control and support of the Syrian opposition, as well as of the course of battles they were involved with, including when they were launched, and halted. This perhaps explains how the first battle to lift the siege on Aleppo ended suddenly and without a clear reason.

Over time, the new agreement between Russia and Turkey became clearer and more substantial. The talks held in Astana between Russia and Turkey was one of the most important casualties of the fall of Aleppo; with Turkey later accepting the presence of Iran as a guarantor. This, in turn, opened the door to the Syrian National Dialogue Conference in Sochi, which Russia will host. Russia believes that the political solution to the Syrian conflict lies in constitutional reform and elections in which Assad can participate with international oversight. Following the second Riyadh conference, the Syrian political opposition has become a mix of the National Coalition and the so-called Cairo and Russia platforms, while the Higher Negotiation Commission has been side-lined. This means the opposition now contains groups who do not adhere to the principles of the opposition, most importantly the removal of Assad. This, in turn, means that the political opposition has, in effect, decided to accept what is being referred to as ‘political reality’, in other words, a political solution on Russian terms. This trend has increased especially following the noticeable change in the positions of Turkey and Saudi Arabia, and the neutralization of revolutionary factions and individuals who stood firm on the point of removing Assad as part of any political solution. There is also the matter of the other factions which are too weak to stand up to the directions of the states which fund them, and unable to take any military action which might change the balance of power in the conflict.

It appears from the course of events that have taken place, that the removal of Assad is not in the interest of the majority of international actors as it stands. The question is: has the Syrian opposition lost its last remaining allies in the wake of the Astana talks and the Riyadh 2 conference? The posing of this question leaves opponents—military, civilian, and political—still holding out hope for a change that could pave the way for the removal of Assad.