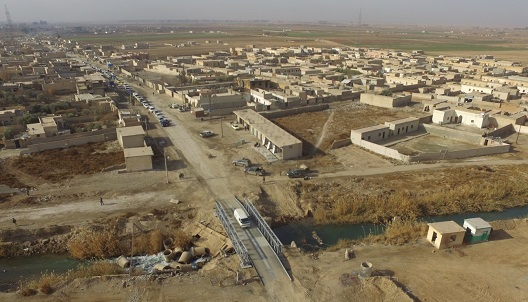 A key component of the new US policy towards Syria, as outlined by Secretary of State Rex Tillerson in his address at Stanford, is its focus on stabilization efforts in areas cleared of the Islamic State (ISIS, ISIL, Daesh). Stabilization efforts, according to Tillerson, aim to bring about two of the five desired end states he enumerates: ensuring the enduring defeat of ISIS, and facilitating conditions that would allow for the safe and voluntary return of refugees and internally displaced persons (IDPs). His concession that “no party in the Syrian conflict is capable of victory or stabilizing the country via military means alone” indicates an understanding of the root cause of both the war with ISIS and the Syrian civil war: bad governance.

Stabilization efforts are a temporary fix for the underlying problem of bad governance, which hostile state and non-state actors have failed to provide to Syrian civilians in the form of basic essential services. Common stabilization activities include disposing of unexploded ordnances left behind by ISIS, clearing roads, restoring electricity and water, and getting children back into school. There is a limit, however, to stabilization—one that government officials are quick to point out.

As Tillerson explains, “‘stabilization’ is not a synonym for nation-building or reconstruction.” To the layperson, this is a tricky circle to square: how can one expect to restore water, electricity, schools, and roads without engaging in reconstruction? The reason for these semantics is driven in large part by a strong aversion to words that bring to mind the United States’ costly activities in Iraq and Afghanistan. This type of language is anathema to both congressional appropriators and constituents who question investment in the infrastructure of another country when that of their own is in decline. But, if not reconstruction, what exactly is stabilization?

The United States Institute for Peace and the US Army Peacekeeping and Stability Operations Institute set forth the following definitions in a manual endorsed by the State Department’s Bureau of Conflict and Stabilization Operations: “stabilization” is defined as “ending or preventing the recurrence of violent conflict and creating the conditions for normal economic activity and nonviolent politics,” while “reconstruction” refers to “the process of rebuilding degraded, damaged, or destroyed political, socioeconomic, and physical infrastructure of a country or territory to create the foundation for long-term development.”

In this definition and others, stabilization is treated as a first step focused on the immediate reduction of violence and delivery of essential public services; a prerequisite for the second step of reconstruction, which is more focused on long-term rebuilding and rehabilitation. It is crucial to point out that in literature on the subject, one usually finds the words together—so frequently that these activities are referred to in shorthand as “S&R.” The marrying of these terms expresses the understanding that activities of one kind are not useful in the long term without those of the other. Thus Tillerson’s insistence on separating stabilization from reconstruction, while understandable, is a bit misleading.

The United States has already contributed $875 million in stabilization and other non-humanitarian assistance since the start of the crisis. And of the $2.65 billion apportioned to the US Agency for International Development (USAID) for fiscal year 2018, congressional appropriators have allocated funds for non-lethal assistance for programs to address the needs of civilians in Syria. These include programs to establish representative and inclusive governance, develop and sustain civil society, promote stability and economic development, protect and preserve cultural heritage sites, counter extremism, and more.

Furthermore, the National Defense Authorization Act (NDAA) for fiscal year 2018 more than doubled funding for Overseas Contingency Operations (OCO) in the section pertaining to the authority to provide assistance to counter ISIS in Iraq and Syria, allocating $1.27 billion despite the stated territorial “defeat” of ISIS. And while the Department of Defense doesn’t currently have a stabilization fund, talks are underway to get internal approval and then appeal to congress for such a fund, according to the Acting Deputy Assistant Secretary for Stability and Humanitarian Affairs at the Office of the Under Secretary of Defense for Policy. These rather large sums indicate that the United States’ endeavors in Syria will likely go beyond the modest definition of stabilization.

Efforts are already underway in Raqqa. The current priority is to remove remnants of war and restore water and electricity, but also to empower and enable local governance. Another focus is “helping” Syrians to open their schools, clinics, and hospitals, according to senior USAID officials recently returned from a visit. These officials insist that Syrians are in the lead, and the United States is simply providing financial support and technical assistance. However, having seen what that financial support looks like, the claim that we are not engaged in any form of state-building rings hollow.

It is highly unlikely that given this level of investment, the US will walk before “reconstruction” efforts begin in earnest. Clearing roads and restoring water is a necessary first step, but to achieve Tillerson’s stated goals of ensuring the enduring defeat of ISIS and facilitating refugee returns, real rebuilding is needed. He is right to discourage reconstruction assistance to regime-controlled areas—legislation has been introduced in Congress to do just that—and call for burden-sharing in the international community in rebuilding Syria. But without a US commitment to limited reconstruction efforts in Syria, it is doubtful the European Union and regional partners will move forward.

Rather than tip-toeing around politically unsavory words, the United States needs to accurately disclose its role in rebuilding Syria. In his recent testimony to Congress, former US Ambassador to Syria Robert Ford called for “benchmarks and timelines for US ‘stabilization’ efforts” including “tight definitions of the minimal restoration of exactly which services and what constitutes adequate local governance.” If the administration is forthright about future reconstruction activities in Syria, benchmarks and timelines should be set for “reconstruction,” as well. A US-led international effort to rebuild cleared, opposition-held areas in Syria could prove a powerful counter-terrorism tool, as Faysal Itani, a Senior Fellow at the Atlantic Council, has repeatedly asserted. The United States should be clear about if, when, and how it intends to utilize this tool.

Emily Burchfield is a program assistant at the Rafik Hariri Center for the Middle East at the Atlantic Council.