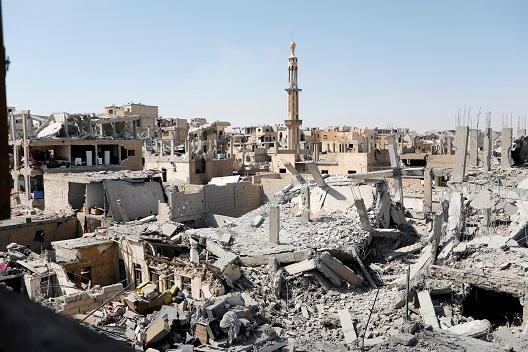 International political opinion about the future of Syria’s President Bashar al-Assad has shifted. President Donald Trump’s revocation of any remaining support for the covert CIA ‘Train and Equip’ program, and French President Emmanuel Macron’s recent admission that the removal of Syrian President Bashar al-Assad is no longer a key policy objective, demonstrate the faded political will to force a transfer of power in Syria. Within that context, the complexity that the current landscape presents for stabilization and reconstruction merits consideration.

Post-conflict stabilization traditionally focuses on increasing and restoring a state’s reach, either by working with a legitimate state to foster more robust and stable governance, security, and social outcomes; or nation building to replace and reconstruct state functionality in a failed state. Syria presents a challenge in this regard—it is neither a failed state nor a legitimate state whose reach and influence external actors are keen to extend.

In areas of Syria under armed opposition control, the state apparatus has ceased to function due to the conflict. The central authority has gone so far as to degrade and destroy public services in these areas by bombing civilian infrastructure. In these territories, Western donors have continued their focus on building and enabling state-like functions. In Saraqib, the first Local Council elections took place (although Hay’at Tahrir al-Sham—or HTS, the primary threat to stability in Idlib outside of the Government of Syria itself—challenged the town almost immediately). Local Councils work in coordination with the Syrian National Coalition and the opposition political apparatus and drive civil society building in opposition-controlled parts of the country. They manage aid provision, beneficiary lists, education, health, and other services in the areas they govern. Short of a political solution, however, these Local Councils remain largely contained and vulnerable. The Syrian government, in areas it has recaptured through ‘reconciliation’ agreements in recent months, has easily dismantled their programs and forcibly displaced their personnel. It is unlikely that areas under armed opposition control, including so-called ‘de-escalation’ zones around Daraa, eastern Ghouta, and northern Homs, would reach the threshold in conflict reduction to warrant extensive stabilization or reconstruction work in the near term.

In other opposition-controlled areas of the country that has seen a reduction in violence, stabilization programs have begun within the context of the local governance systems. In northern Aleppo countryside, under the purview of the Turkish-backed Euphrates Shield, a post-conflict stabilization program is underway. The Kurdish-held northeast of Syria has been conducting its own governance arrangements for some time, though any major post-conflict reconstruction will likely have to wait until military operations in Raqqa cease, and will probably involve some cooperation with the Syrian government once they do. By contrast, the Assad regime has focused its narrative throughout the conflict on state legitimacy to promote both international and domestic control. In the eyes of Western donors and governments, the Syrian regime has lost much of its legitimacy for targeting humanitarian aid workers and institutions, driving the heavy civilian casualty toll, deploying chemical weapons, and pursuing structural reforms designed to entrench displacement, disenfranchise landowners, and criminalize humanitarian aid work and media activism. Yet despite its obvious disregard for international law and human rights, the regime has maintained some international legitimacy by forcing stakeholders—including UN agencies operating in the country, the UN Security Council, and external military actors—to recognize state sovereignty. Furthermore, the large areas of government-controlled territory do not constitute a ‘failed state’ insofar as the many state institutions continue to function, despite their increasing fiscal concerns. In these areas, the regime maintains this perception by ensuring state institutions and services continue to function, propped up by international development efforts in education and health. It allows the regime to run state examinations and provide medical care in public hospitals—all while destroying the same bureaucratic and service centers in opposition-held areas. While views may vary on the legitimacy of the Assad regime itself, this pattern has belayed the same questions over the legitimacy of the state apparatus.

As such, Syria represents neither a legitimate state nor a failed state in the traditional sense. This divergence creates several problems in the absence of a political settlement that provides an agreed-upon framework for political transition or an increase in the legitimacy and functionality of the state. While no such settlement or roadmap yet exists, it remains critical to better understand the actors and agencies within the Government of Syria that function solely in a technical capacity. Iraq’s de-Baathification process teaches us that even if a settlement were to allow for broad changes to the Syrian government, wholesale and poorly researched broad-brush changes could lead to further instability. Additionally, ensuring that external financing of reconstruction does not constitute ‘odious debt’—loans taken on by the regime “to meet the needs and interests of the country but rather to strengthen” the regime, and hence belonging to the authoritarian regime as a personal debt and not enforceable if the regime is ousted—requires a better understanding of the extent to which the regime acts on behalf of the Syrian people. Arguably, many of the regime’s agreements with allies such as Iran and Russia (for example, trading military support to ensure the regime’s survival for long term financial benefits from key industries) can be viewed as odious.

In all eventualities, external actors considering support for stabilization or reconstruction activity in Syria must understand the extent to which one can separate the Assad regime (Bashar al-Assad and the key individuals and interest groups tied to him via patronage systems) from the Syrian government itself (state programs, departments, and bureaucracies that manage the state).

While it is possible to delineate between problematic aspects of the regime and the Government of Syria to some extent, the regime has consolidated control over the state in myriad ways, during both the pre-war period and throughout the conflict. Patronage systems and favorable appointments, which began during Hafez al-Assad’s reign and continued under Bashar al-Assad in the lead up to the conflict, entrenched the regime’s power over critical bureaucratic functions. A series of legislative changes during the same period that continued throughout the war consolidated wealth and power in the hands of those loyal to Assad. A recent report by the International Legal Assistance Consortium (ILAC) illustrates this link between the state and the regime. The report examined the judiciary throughout the country and found that while many lawyers and judges attempt to conduct their work professionally and fairly, a parallel judicial process runs in secret, with politically motivated or complex cases being transferred into a system over which the judiciary has no control.

Assad’s recent public administration reform initiative is clearly designed to allay the fears of the international community in this regard. In his June speech, and subsequent high profile mandates around employment law, tinted windows, and checkpoints, Assad attempts to demonstrate concern for the ways in which corruption and patronage systems have taken hold in the public sector within the country. Meanwhile, pre-war concerns continue apace, with housing, land, and property rights being stripped, (or likely to be) in many areas tagged for development such as Darayya, Wadi Barada, and Homs. The policy ensures the displacement of people from areas considered desirable to developers, further marginalizing economically disenfranchised communities and bolstering the regime’s patronage networks through preferential access to property and reconstruction funds.

The space between legitimate and failed state that Syria now occupies demands that international actors carefully empower transparent and legitimate state functions to regain some degree of stability. The Assad regime, however, looks ready to offer little in the way of real change or reform. Genuine stabilization and reconstruction must address the conflict’s drivers by engaging with independent state bodies and mitigating or marginalizing patronage-driven actors. Assad will not spearhead such change. The question is, to what extent can international agencies and policymakers sidestep his regime?

Emma Beals is an award-winning independent investigative journalist and analyst, focused on conflict and social issues. She has most recently been concerned with reporting on the Syrian civil war. Follow her on Twitter @ejbeals.