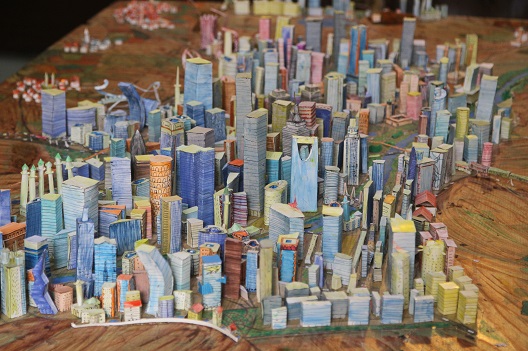 It is fairly easy to consider Syria as a hopeless case, as the country seems trapped in a vicious cycle of nihilistic violence and colossal destruction. The economy is now completely shattered and fragmented, with each party building its own independent entities. The systematic – but imbalanced – collapse of economic foundations is seen across infrastructure and institutions, human and physical capital, and substantial part of wealth. The accumulated economic loss is estimated at $250 billion, with poverty rate at 85% and more than 70% of Syrians inside the country living in extreme poverty. Optimistic studies estimate that with a 5% annual economic growth, it will take at least 20 years and tens of billions of US dollars to recover to Syria’s 2010 $60 billion GDP.

In order to lower the intensity of the conflict and “degrade and destroy” the Islamic State (ISIS,ISIL, or Daesh) Western policymakers – especially the US – are more willing to accommodate the pro-regime Russian policies in the country. This translates into discussions and proposals for planning reconstruction projects, largely portrayed as a way of alleviating the suffering of Syrians, many of which remain outside the country and the majority will not return absent a dignified political settlement. While plans of reconstruction gain more currency, it is hard to envisage how effective such efforts can get underway in the prevailing circumstances without breathing a new life of a legitimate government. The eagerness of the West to reach a resolution to the conflict should not come at the expense of undermining their commitments early in the uprising to support the legitimate demands of the Syrians in having a democratic and inclusive government.

Aware of the fundamental geopolitical shifts, the regime in Damascus is eager to ride the new tidal wave to fast-forward to the economic gains of a political settlement – but without addressing the underlying decades-long governance failures. This seems disconnected from reality, as the concept of a national economy is a distant history. The regime’s writ does not extend over more than half of the territory and its chances of re-imposing central state control are slim – barring a substantial external military support. The strain on the economy has been evident in both fiscal and current account deficit, compounded by capital flight leading the regime to impose import restrictions to stabilise the local currency. The absence of infrastructure investments, and minimal industrial, commercial and trade activities have all contributed to exponential increase of high unemployment rates and declining living standards.

The regime, however, is placing hopes on its main Russian, Iranian and Chinese allies to pick up the bill. Russia and Iran suffer from their own domestic economic challenges, and lack the financial resources to reconstitute the Syrian economy on their own, but the regime is economically too weak to survive without their extensive financial support. After months of high-level visits by Syrian officials, Russia only mustered $1 billion for reconstruction projects. Iranian and Russian assistance is currently focused on accomplishing military objectives and providing short-term economic relief. In the meantime, a broad international coalition is unlikely to materialise unless an inclusive government that is representative of all Syrians is in place. It is understandable that the West is afraid of dual threat of terrorism and mass migration – mainly originating from the MENA region.

However, discussions about restarting the Syrian economy continue to take a top-down and state-centric approach to solving the country’s monumental economic challenges. Any expectations that the regime will be able to rebuild what it had destroyed or improve the welfare of Syrians under its control – let alone in non-regime held areas – will fail to materialise, with military spending taking over any other priorities. It is hard to dispute that Syria’s economy is now driven by the ruthless rules of the conflict, with many intentionally – and unintentionally – participating in the multiple war economies to survive or to accumulate wealth. The only way to encourage them to abandon it is to show a credible alternative in which peace is the winning stock in a market imbued with lucrative predatory behaviour.

Structural socio-economic failures, exacerbated in the past five years, need to be addressed regardless of the shape of the political system. To meet the monumental challenge of restoring the country’s devastated infrastructure and reconstituting social fragmentation, Syria’s human capital will be indispensable. Most of Syrians that left the country sought refuge in places like Turkey, Lebanon, Jordan, Iraq, and even further afield, in Egypt, Qatar, Saudi Arabia, and the UAE. Much of the news coverage has focused on the negative spill over effects such as the refugee crisis, infrastructure and economic costs, competition over scarce natural resources, and rising sectarian tensions.

The vast resources and investments Syria needs to move beyond the conflict is not only beneficial for their country but for the whole region, which suffer from common shortcomings in governance, economic development, and competitiveness. The MENA region must create more than 100 million jobs by 2020, and with the persistent low oil environment, energy-dependent states – even in the Gulf – are not prepared to meet those demands anymore. Using the skills and capital of professionals and investors of Syrians but also those in the region will help plug part of this gap and revitalise the flagging regional trade. The youth bulge that is increasingly seen through the lens of security can be a source of stability if provided with the right tools to benefit from economic opportunities.

Syria, and the region as a whole, will benefit from the entrepreneurial culture that will underpin economic diversification, investment in the service sectors (finance, tourism, logistics and ICT) while supporting youth in education and vocational training. The case of Jordan provides a vivid illustration of some of the minor, but positive externalities Syrians have provided to their host countries. The country has been a primary destination for Syrian industrialists and investors, whose companies and factories have grown annually with millions of US dollars’ worth of investments. The region does not lack the capital required to provide the economic backbone for stabilising Syria, with over $4 trillion available to regional sovereign wealth funds and a similar amount in the private sector.

Many prominent expatriate Syrian businessmen are also eager to see the end of the conflict to take part in rebuilding their home country. Those joint efforts will reverse the shrinking middle class and stem the flow of refugees, who have been fleeing conflicts and economic hardships. While Syria has become in the past five years a source of regional destabilisation, it can be a source of regional harmonisation – if provided with the requisite international support it deserves.

Rashad al-Kattan is a political and security risk analyst, and a fellow with the Centre for Syrian Studies (CSS) at the University of St. Andrews.

Image: Photo: A view shows a small scale model built by 14-year-old Mohamed Qutaish, representing the way he sees the reconstruction of Aleppo, inside a showroom in Aleppo's Seif al-Dawla district, Syria, August 31, 2015. Qutaish is exhibiting small scale models that he made from simple tools with the help of his father. Some models represent the current city of Aleppo as other models represent Qutaish's vision on how he wishes Aleppo to be rebuild in the future when the conflict ends. REUTERS/Abdalrhman Ismail