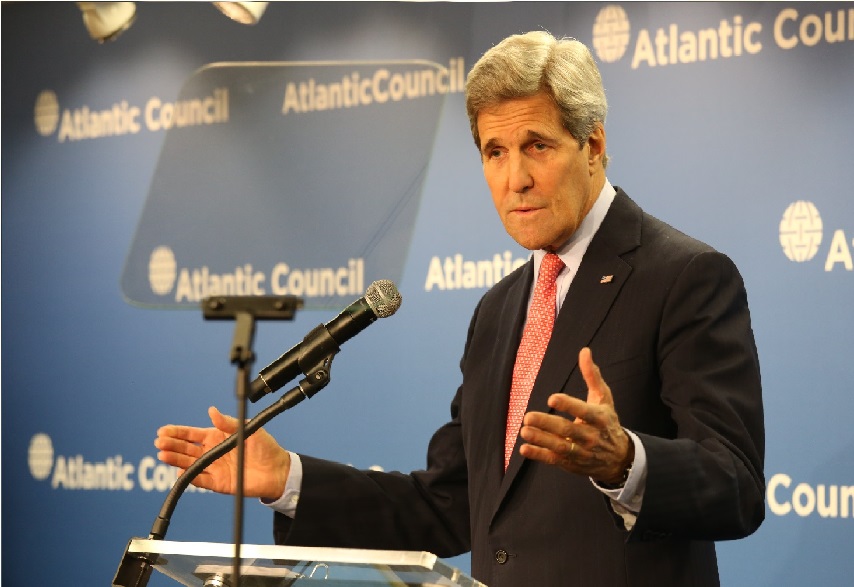 Secretary of State John Kerry at the Atlantic Council

Trade and National Security: Renewing US Leadership Through Economic Strength

“2015 is simply not the time for us to decide that trade negotiations are too hard, or somehow vacate the field and let seventy years of lessons from the Great Depression and World War II get tossed aside. It’s not the time for us to sit back and allow the principles of free and open trade to be supplanted by the barren twins of protectionism and mercantilism.” – Secretary of State John Kerry
Secretary of State John Kerry spoke today at the Atlantic Council to underline the importance of TPA, TTIP, and TPP. Not only are these trade agreements key to promoting American jobs and businesses, but they also allow the United States and its partners to write the rules of international trade. Since the US market is one of the most open in the world, with high environmental and labor standards, there is nothing to lose by reaching deals that lower barriers elsewhere. Moreover, Secretary Kerry notes that in light of the current geopolitical climate, it would be unwise for the US to build a wall around its economy. Instead, the US should build “alliances and partnerships and understanding and rules of the road by which we can all act with certainty.” TTIP could serve as a strategic pillar of the Trans-Atlantic community, and would underscore the democratic solidarity that has united both sides of the Atlantic. (Atlantic Council)
Full transcript
Video of the event

Working Together for the Right Kind of TTIP

“The US and the EU share the values on which we want future trade rules to be based. We believe in high standards of regulation, in human rights, in WTO-based trade rules and in open markets. By striking an alliance with the US around exactly these questions we are both strengthening of our voices in the world.” – Cecilia Malmström
European Trade Commissioner Cecilia Malmström participated for the first time at a plenary session of the European Economic and Social Committee since becoming EU Commissioner, speaking about the benefits of TTIP, particularly for SMEs. She noted that a well-negotiated TTIP would create economic opportunities, make government more effective, and position Europe correctly for the 21st century. The goal, Ms. Malmström concluded, is to find solutions that maximize benefits while addressing doubts. (European Commission)

“We are very disappointed by today’s announcement of a regulatory proposal that appears hard to reconcile with the EU’s international obligations.” – United States Representative Michael Froman
Michael Froman expressed his disappointment for the new proposal by the European Commission to amend legislation on its genetically-engineered food and feed approval process. This would allow the EU countries to “opt-out” of imports of GE food and feed. Moreover, Froman notes that dividing the EU into 28 separate markets is counterproductive to the EU’s goal of deepening the internal market. (USTR)

Ombudsman: EU Must Interrogate US Over TTIP Transparency

European Ombudsman Emily O’Reilly notes that the US’ resistance to greater transparency in TTIP poses a problem to the European Commission that must answer demands for more openness from civil society if the deal is to be concluded. The Ombudsman points to the disparity in transparency culture between the EU and the US: while the EU is more open about sharing negotiating texts, the US considers all trade agreement documents classified. (EurActiv)

Insurers Lead Moves to Include Financial Services in TTIP

Insurers from the US and EU are some of the leading backers of a financial services chapter within TTIP. Although the US officially remains opposed, the position of its insurance sector reinforces the impression that US opposition to financial services in TTIP emanates from regulators rather than industry. (EurActiv)

Hilary Clinton has been very reticent about supporting the trade agreements currently under negotiation. Nevertheless, during a tour of a computer numerical control machine lab at New Hampshire Technical Institute, she noted that any trade deal that she’d support would have to produce jobs and raise wages while increasing prosperity and protecting US national security. (Bloomberg)

Bertelsmann Foundation Executive Director Annette Heuser lists three factors that must be included in TTIP: First, joint standards on capital and liquidity requirements for banks, derivatives and financial accounting could could provide greater regulatory stability. Second, consensus on how to manage data flows, data protection, and data privacy would allow the US and EU to better govern the virtual space. Third, a reformed ISDS within TTIP would set the example for a similar mechanism on a global level, which would be especially useful in future US and EU investment treaties with China. (Bertelsmann Foundation)

The Path Forward in US-Japan Relations: Trade, Diplomacy, and Security – May 4 in Washington; hosted by the Brookings Institution – More Information

Global Commerce: New Trends and Opportunities in the Americas and Beyond – May 14 in Houston, TX; hosted by the Atlantic Council – More Information

The 9th Round of TTIP negotiations is take place in New York City this week.
Economy & Business Trade