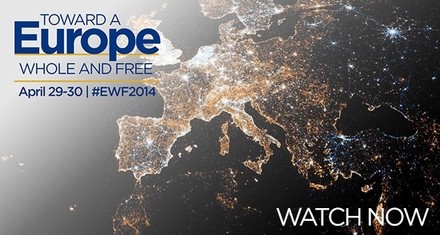 TTIP Action aggregates the latest news and best analysis from across the United States and European Union on the ongoing negotiations for the Transatlantic Trade and Investment Partnership (TTIP).

the most pressing challenges to the completion of a Europe whole and free. This vision, successfully implemented for two decades via a bipartisan and transatlantic strategy, has been called into question both within current NATO and EU members and by Russia’s aggressive actions in Ukraine. Leaders and experts are gathering at the Council’s headquarters to debate the opportunities and challenges in Europe’s east and south with the aim of exploring a renewed common transatlantic approach. Among several other keynote speakers, European Commission President Barroso, Secretary of State Kerry, and Vice President Biden are scheduled to speak.
We welcome you to follow the conference via webcast online here.

First European Commission Presidential Debate
Last night in Maastricht, Euronews hosted the first ever debate between candidates for the European Commission presidency in front of an audience of 700 students. Economics and foreign policy played a large role, including the candidates’ position on TTIP. Video of the debate is available online here; and the discussion of TTIP begins around the 21:00 mark.

On a related note, Vote Watch Europe has put together an excellent summary of the European political parties’ positions on key issues in the last European Parliament as voters get ready to elect the next one. That is available here.

Remarks by Secretary of State John Kerry at the US Export-Import Bank Annual Conference
On April 24, Secretary of State John Kerry delivered an address at the US Export-Import Bank’s Annual Conference. Secretary Kerry highlighted the benefits of the Trans-Pacific Partnership, noting that it would set “high standards” for trade that would impact forty percent of the global economy.

The Secretary’s full statement can be read here.

Chancellor Merkel to Visit Washington on May 1 and 2
German Chancellor Angela Merkel will travel to Washington, DC for meetings with President Barack Obama, IMF Director Christine Lagarde, US senators, and other key stakeholders. She will also speak at the US Chamber of Commerce on a number of transatlantic economic issues, including TTIP. (German Missions in the United States)

‘Sweden is a trade-policy superpower’
Swedish Minister of Trade Ewa Björling recently addressed a seminar hosted by the foreign ministry in Sweden, where she referred to TTIP as a historic trade opportunity that has the propensity to improve US-EU relations. In particular, telecoms, financial services, and public procurement will be important issues for Sweden in ongoing TTIP negotiations, she said.(The Local)

Obama’s Critical Moment on the Trans-Pacific Partnership (TPP)
Just prior to President Barack Obama’s arrival in Japan last week, Edward Allen of the Council on Foreign Relations analyzed how President Obama might address some of the more contentious issues on the US-Japan agenda. The key to TPP rests on an agreement between the United States and Japan, as the countries combined account for 80 percent of the economic output of the participating TPP countries, yet agriculture and automotive discrepancies have proved difficult to surmount. (Council on Foreign Relations)

Transatlantic Trade and Investment Partnership
The United States Embassy in Germany recently published a piece that attempts to debunk some of the myths surrounding TTIP, including the notion that TTIP negotiations are being conducted in secrecy and that large corporations will be the only benefactors if an agreement is reached. In reality, several elements of the negotiations have already been made public; and moreover, small businesses will likely reap the greatest benefits from TTIP. (US Diplomatic Mission to Germany)

Pivot to Asia requires a stronger Europe
James Goldgeier, dean of American University’s School of International Service, writes that US relations between Europe and Asia are not mutually exclusive. In order for the US pivot to Asia to work, the European Union must also be strong so as to help the US address geopolitical challenges, including those in the Middle East and Africa. (The Hill)

Who’s Down with TPP?
In spite of relatively high public support for TTIP and TPP, President Obama is likely to encounter many obstacles on the road to closing the deals. Public reservations about the details of the negotiations, plus partisan maneuvering on Capitol Hill, may prove difficult to surmount. (Foreign Policy)

Trade Policy and the Environment: Uneasy Neighbors
Bill Krist of the Wilson Center says that trade policy agreements need not come at the expense of the interests of environmental groups. Indeed, several trade agreements since 1998 have incorporated environmental policies into their frameworks, and the US is making innovative environmental protections core parts of its TPP and TTIP negotiating strategies. (America’s Trade Policy)

Toward A Europe Whole and Free Conference – April 29, Washington, DC at the Atlantic Council – More Information

A Transatlantic Pivot to Asia – May 1, Washington, DC – More Information

Fifth Round of TTIP Negotiations – Washington DC – Late May 2014