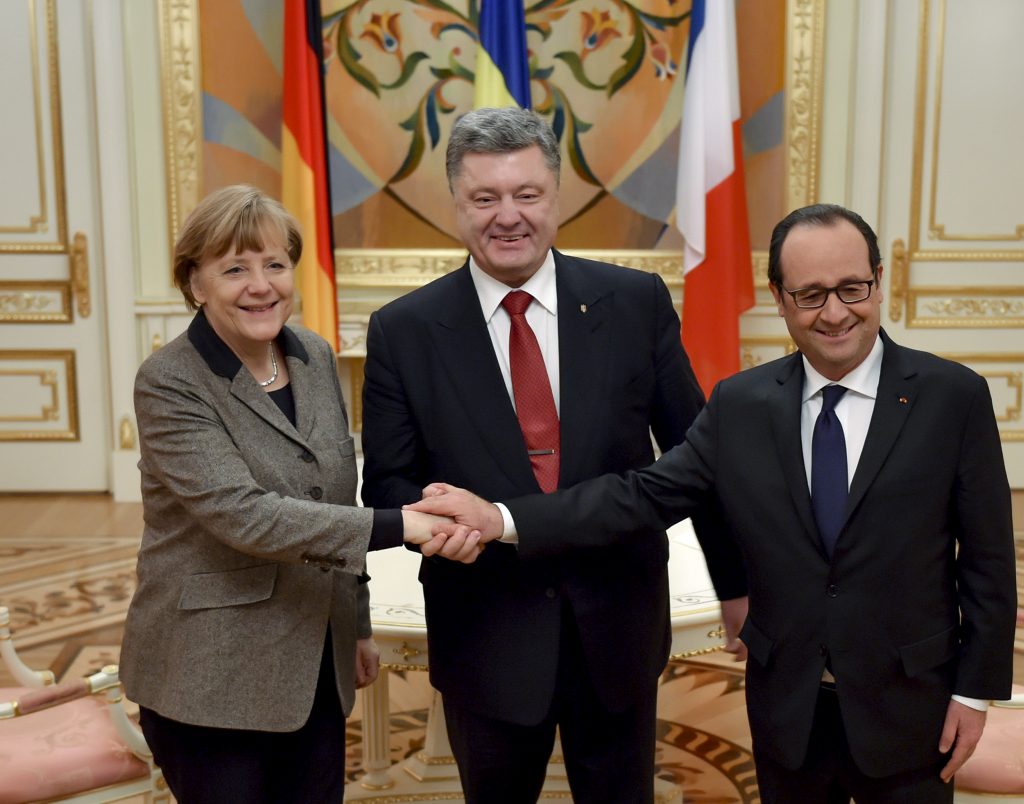 France & Germany Seek to Halt the Fighting, May Use Specter of a Better-Armed Ukraine to Press Putin

The Obama administration has announced no decision on whether to help Ukraine use US-made weapons to defend against Russian-sponsored attacks. But France and Germany are probing to see whether that threat might help push Russian President Vladimir Putin to halt his intensified war in southeastern Ukraine.

Russian proxy forces, backed by regular Russian troops, have seized new territory in heavy fighting around Donetsk and Lugansk. The heightened war is killing greater numbers of civilians, is uprooting residents from their homes in mid-winter, and is deepening Ukraine’s economic crisis. Against that backdrop, German Chancellor Angela Merkel and French President Francois Hollande are to visit Moscow for talks today. They met yesterday with Ukraine’s President Petro Poroshenko about ways to implement the September peace agreement that never got off the ground.

“This is their initiative, meaning that it doesn’t seem to have been coordinated or organized with the United States,” said John Herbst, an Atlantic Council analyst and former US ambassador to Ukraine. “My interpretation is that they realize there is a serious debate going on in Washington about providing arms to Ukraine, and they want to see if they can use that,” Herbst said in an interview. “They want to check whether the Kremlin is willing, for the first time, to be serious about implementing a negotiated solution to the conflict.”

Merkel and Hollande might at best obtain a short-term ceasefire, analyst Timothy Ash wrote today after a four-day research visit to Kyiv, but any “longer-term resolution might still prove elusive as the two sides remain far apart.” A truce would help Ukraine and its international partners as they try to stabilize the country’s shattered economy, wrote Ash, a senior economist at Standard Bank in London. Poroshenko’s government and the new parliament are making impressive first steps on critical economic and anti-corruption reforms, and governments led by Europe and the United States are piecing together loans, but “no amount of Western financial support will likely succeed unless the conflict in the east is resolved,” Ash wrote in an e-mailed analysis.

The White House for months has refused Poroshenko’s request for US weapons—including anti-tank missiles and radar systems to pinpoint artillery batteries—that could make a difference in the war. Since last April, Russia has sponsored the creation of separatist “republics” in Ukraine’s Lugansk and Donetsk provinces in an attempt to force Ukraine to abandon its effort to build closer ties with Europe. The Kremlin has sent troops, tanks, artillery, special forces, intelligence officers, and mercenaries to conduct the war—actions that it formally denies.

Russia has escalated the war since the new year, sending between 1,000 of its own troops according to NATO, or several thousand, according to Ukraine. It also has sent heavy artillery, rocket systems and T-72 and T-80 tanks, according to US and NATO officials, leading This escalation has pushed the Obama administration to reconsider arming Ukraine.

“It’s clear that momentum is building in the United States, in Washington,” for US supplies of at least some defensive weapons, said Herbst, who heads the Atlantic Council’s Dinu Patriciu Eurasia Center. Herbst was one of eight former senior officials who last week published a report urging the administration to help Ukraine with defensive weapons.

“On the basis of our group’s conversations with senior administration officials, it’s clear that they’re reviewing the policy, and conceivably, they could change it,” Herbst said. “The fact that Ashton Carter told the Senate that he would be supportive is a public indication of that.” Carter spoke to the Senate Armed Services Committee last week in a hearing on his nomination by President Obama to become secretary of defense.

“The fact that they’re reconsidering it does not mean that a decision will be taken. I would guess that they probably will do so in some form, although they may not provide all the equipment” that Ukraine would like,  Herbst said.

The United States and its European allies are discussing how to sustain or increase pressure on Russia to halt its war against Ukraine. Vice President Joe Biden is in Europe for talks with leaders there as they prepare to meet next week and consider the possibility of additional economic sanctions against Russia.

Regarding a supply of weapons, “where the Europeans are on this plays a role,” said Herbst. “Chancellor Merkel said something negative two or three days ago” about a policy of arming Ukraine, “but not so negative as to expect that her reaction would make us pause. We can’t expect her to endorse this.”