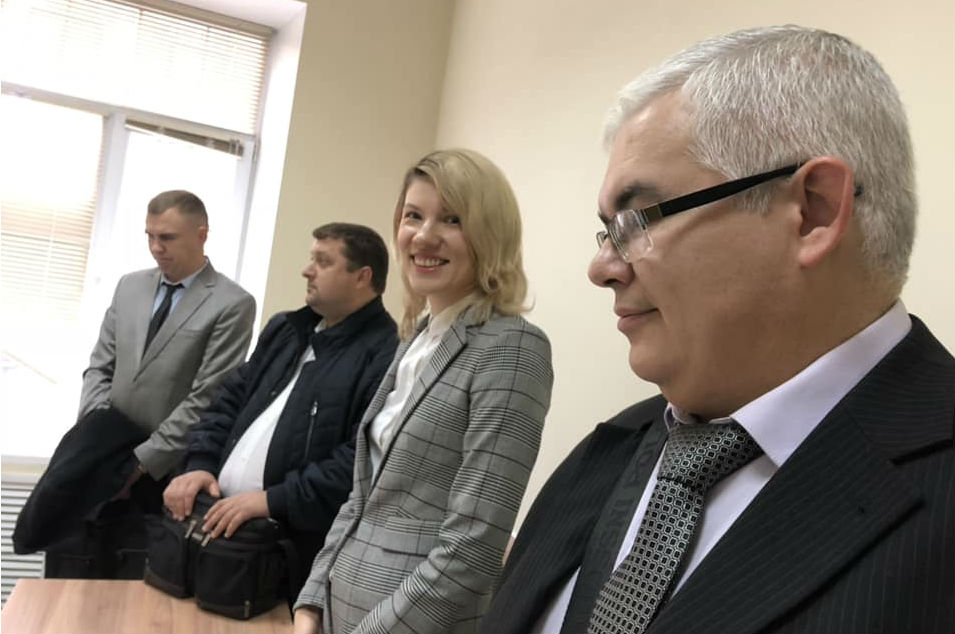 On October 9, Olena Tregub reacts as she wins a lawsuit in the Kyiv District Administrative Court over her dismissal against the Ministry of Economic Development. Credit: Courtesy Photo

Olena Tregub spent more than two years working around the clock to help revitalize her moribund government ministry in Ukraine. As director of international aid coordination for the Ministry of Economic Development and Trade, her mission was to bring some transparency to $12 billion of foreign assistance pouring into the country after 2014.

Tracking assistance, cajoling donors to coordinate, persuading prospective recipients to stop poaching each other’s projects, and following up on red flags, the work often felt like tilting at windmills.

“We really felt that we were working against the clock, because we have this short opening where we can deliver real change,” Tregub, thirty-six, says now, looking back at that period from 2015 to 2017.

It was dangerous at times, too; she was disrupting years of habitual skimming and an entrenched bureaucracy bound to a corrupt administration under former President Viktor Yanukovych. Her children were even mentioned in veiled threats.

“They told me I need to take care of my children” rather than continue with anti-corruption efforts, she recalls.

Tregub, who had moved back to Ukraine after ten years in the United States to help consolidate the promise of the Maidan revolution, knew she couldn’t take such an intense work environment forever. But she didn’t think it would end the way it did. She was dismissed in an ostensible reorganization and her department dismantled.

Now, she may have the chance to return to the ministry. Tregub recently won a lawsuit over her dismissal, with a ruling in Kyiv District Administrative Court against the Ministry of Economic Development and Trade of Ukraine and State Secretary Oleksii Perevezentsev, who had issued the dismissal. The judge, persuaded by the evidence Tregub had compiled—and possibly by the trial’s regular audience of activists, journalists, and even members of parliament—ordered Tregub reinstated with full back pay.

In the October 9 ruling, the court repeatedly rejected the defendants’ arguments, including that the ministry had aimed to save money by cutting jobs, and that Tregub had refused a transfer.

“The court concludes that, with the dismissal of the plaintiff, the defendant violated Ukraine’s public service law and labor law,” the judge wrote. The decision “shall be complied with immediately.”

For Tregub, the unequivocal ruling was a vindication for her and other reformers working against the odds to right Ukraine’s wobbling ship of state.

“Olena’s idea was `How do you fight corruption? You make everything transparent,’ said Alina Polyakova, the David M. Rubenstein Fellow in foreign policy at the Brookings Institution and a friend of Tregub’s. “This became her life’s work at the ministry.”

A journalist with experience in development, Tregub was working on policy papers and analyzing reforms for the Kyiv Post in 2014 and early 2015, when aides to then-Minister of Economic Development and Trade Aivaras Abromavicius contacted her about joining the agency’s efforts. She came on board in February 2015 as an advisor to Abromavicius and became director of the Department of International Assistance Coordination that April.

Her division had forty-eight staff members at the time, but the ministry was reorganizing and her team was pared down. After hiring a few new civil servants and temporary advisors, she ended up with a staff of twenty-seven.

Tregub had to work fast. Her department was one of those in the ministry considered to be in the so-called “red zone,” dealing with funds that were highly vulnerable to corruption.

“The Ukrainian government was overwhelmed and didn’t understand what to do with all this money, with all these donors, with all these consultants who were flooding Ukraine,” Tregub said in an interview from Kyiv.

But the Ukrainian government also had little money for innovation. So Tregub won grants from American philanthropist George Soros’s Open Society Foundations and from the United Nations Development Program to hire technical advisors. Another from the European Commission funded the pilot of a new website that would make grant information available for public scrutiny for the first time, Open Aid Ukraine.

“She was the first one to make all the donor assistance public,” said Olena Prokopenko, head of international relations for the Reanimation Package of Reforms. That move got high marks from Ukraine’s civil society and Western partners, but made Tregub “an enemy for the old guard of the ministry and other interested authorities” who benefited from the previous secrecy around aid distribution, Prokopenko said.

The tracking helped Tregub’s staff spot irregularities, and journalists investigated suspect entries. But there still were no serious penalties for corruption. Even today, political leaders remain mired in battles over the establishment of an anti-corruption court.

“She went into this work, I think, with a desire and a commitment to not let things go back to business as usual in Ukraine,” Polyakova said. “What Olena was trying to do was perhaps even more revolutionary than she had expected.”

Tregub had long seen signs of resistance from ministry veterans. Shortly after she started, certain officials tried to shift her authorities to another department. She managed to short-circuit that attempt. In February 2016, Abromavicius tendered his resignation, declaring in a statement, “It has become clear that any kind of systemic reform is decisively blocked.”

And then there were the cases where Tregub tried to run signs of corruption to ground.

In one instance involving a Ukrainian fund that received contracts for over €125 million intended for repairing schools and other infrastructure, Tregub says she refused to sign off on a tranche of funding until she could be confident of how previous funds had been spent. She found that an intended supervisory board wasn’t functioning and had included a number of members of the Yanukovych administration who had fled the country.

Tregub set new reporting rules for the fund, and persuaded the donor to commission an independent audit. She was due to receive the results around the time she was dismissed.

“The real reason, in my opinion, that got me fired is the fact that I launched a lot of investigations into possible corruption happening around international assistance,” Tregub says.

“She is a persistent, principled, strong woman leader who is unafraid to whistle-blow, and is committed to dismantling corruption,” said Maria Stephan, director of the program on nonviolent action at the US Institute of Peace. “She’s also pretty no-nonsense.”

In March 2017, her Department of International Assistance Coordination was disbanded in a “reorganization.” No one else was assigned to do the work. She was strung along for months until she was finally dismissed in June of that year. The Open Aid Ukraine website her team had built was frozen in time.

Even as Tregub realized she was being pushed out, she was certain someone else would take over. She’d prepared a twenty-page memo outlining how it all worked, where to find the files, and what needed to happen next.

“That file was never used,” she says.

Tregub went on to take a position that October as Secretary General of the Independent Defense Anti-Corruption Committee (NAKO), a joint initiative of Transparency International units in the UK and Ukraine. At least from the outside, she was able to pressure Ukrainian leaders to move forward on combating corruption.

Now that she has won the lawsuit, Tregub is anxious to return to the ministry, despite her experience there. She wants to see what happened after she left, maybe even try to put the derailed effort back on track. She says the minister who took over from Abromavicius, Stepan Kubiv, told her when she was dismissed that he opposed the decision and assured her that her work would not be lost.

She wants to hold him to his word. Maybe with her allies in Ukrainian civil society and the international community—and with elections due next year—she can pry open that window of change a little wider. Others are still fighting, and she’s determined not to give up either.

Viola Gienger has covered foreign affairs, defense, and international security for Bloomberg News, led programs and training for independent media in the former Soviet Union and the Balkans, and was senior editor/writer at the US Institute of Peace. She is Washington Editor for the online forum Just Security at New York University School of Law.