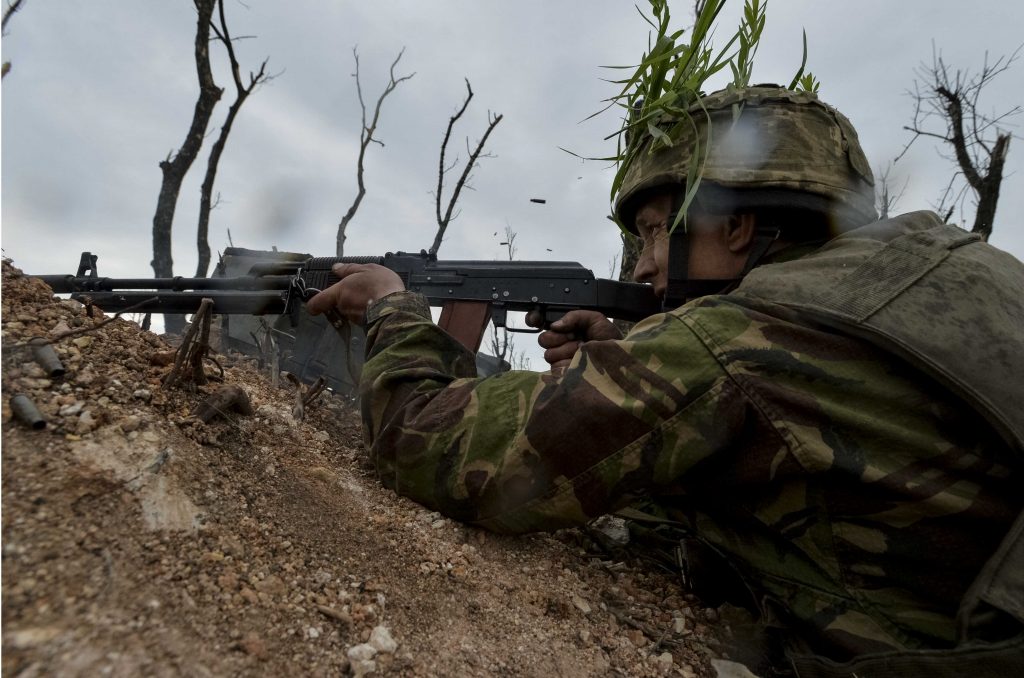 Armchair strategists have come out of the woodwork to explain why it would be a mistake for the United States to arm Ukraine. They argue that Russia is stronger than Ukraine and can outmatch any escalation, Moscow has a greater interest in Ukraine than Washington, and Ukraine’s government is corrupt and undeserving of such support.

These arguments are based on hoary myths, outdated analyses, and an incomplete understanding of Kremlin policy and American interests.

In “Don’t Arm Ukraine,” Michael Brendan Dougherty claims that “Ukraine is a deeply divided country,” echoing the infamous CIA National Intelligence Estimate from the 1990s that said Ukraine might split in two. But that prediction proved false and, while differences between east and west Ukraine have not disappeared, they have lessened considerably since 2014.

Dougherty wrongly asserts that “Russian-speaking Ukrainians see the United States as complicit in overturning a democratic result in 2015.” First, he probably meant 2014, when President Viktor Yanukovych fled following massive protests. Second, the vast majority of Ukrainians speak Russian and the vast majority of Ukrainians welcomed Yanukovych’s departure after he either ordered or permitted the use of snipers against demonstrators. It is true that the Kremlin is peddling the falsehood that the United States was responsible for Yanukovych’s ouster, but it has gained little traction even in the parts of the country where sympathy toward Moscow was once substantial. That sympathy is much reduced because of the Kremlin’s ongoing war in Ukraine.

Dougherty observes that “successive governments in Kyiv have turned out to be ineffective and/or hopelessly corrupt.” While there is much truth in this statement, it is incomplete and ultimately misleading. Under Poroshenko, reform in Ukraine has been impressive. The government has cleaned up the banking sector, introduced a transparent system for government procurement, and moved toward a single, market price for natural gas. This last measure cleaned up the country’s most corrupt sector, removed its dependence on Russia for natural gas, and reduced its budget deficit by 80 percent. While corruption remains a major problem, the IMF and EBRD give Ukraine good marks overall for reform, especially since these efforts are taking place in the midst of a war.

Former NSC Senior Director Charles Kupchan joins Dougherty in claiming that the United States has no major interests in Ukraine. But as Secretary of Defense James Mattis has pointed out, Russia is “resurgent and more aggressive” and has placed the “international order under assault.” Moscow is the world’s other nuclear superpower with the second or third most powerful conventional military. Russian President Vladimir Putin claims the right to intervene on behalf of ethnic Russians and Russian speakers wherever they live and wants a sphere of influence within the former Soviet Union, if not beyond. To achieve these aims, he went to war with Georgia in 2008 and has been at war with Ukraine since 2014. His ambitions go far beyond Ukraine.

The United States has a vital interest in keeping the peace in Europe, and a vital interest in the strength and viability of NATO and the European Union. The Kremlin seeks to weaken both institutions and the ties binding the United States to Europe. The most cost efficient way to counter the Kremlin’s revisionist policies is to increase the cost of its aggression in Ukraine. Thanks to Congress, we are raising the economic costs on Moscow through sanctions. But that is not sufficient.

Another error in Dougherty’s article is the suggestion that the Russian public, like the Putin government, is “willing to lose troops in battle.” Kupchan shares this view, claiming that the master public manipulator Putin “would hardly fold his hand if Russian casualties were to increase.” In fact, numerous polls by the Levada Center, the premier Russian polling institution, show that Russians do not want their soldiers fighting in Ukraine. For that reason, Putin hides his casualties from the public. Providing defensive arms to Ukraine—specifically Javelin missiles that destroy tanks—would make it harder for the Kremlin to conduct additional offensives because it would mean more Russian casualties.

Leonid Bershidsky argues that it is futile to send anti-tank weapons to Ukraine because Moscow has 20,000 tanks and can always provide more. In addition, he asserts, there have been few changes in territory around the contact line over the past two years and, therefore, anti-tank weapons would be used in a Ukrainian effort to take back the territories currently occupied by Moscow. This is simply wrong.

Ukrainians have fought the Kremlin to a standstill, but there are casualties every day, and since the Minsk II ceasefire, Moscow has taken hundreds of additional square kilometers of Ukrainian territory. Providing anti-tank missiles will help deter Moscow from taking more.

Kupchan also claims that sending arms would “cause a rift between the United States and its main European allies.” While Germany and France oppose the move, Chancellor Angela Merkel has said and German officials have told me privately that if the United States provided arms, they would still cooperate with Washington on seeking peace in Ukraine.

The United States made a commitment to guarantee Ukraine’s sovereignty and territorial integrity when it gave up its nuclear weapons in 1994. Providing defensive weapons to Ukraine will honor that commitment and raise the cost of the war for Moscow. Over time, that may help persuade the Kremlin to withdraw from the Donbas. Even if it does not, it will force Moscow to waste additional resources in Ukraine and make them think twice about challenging us in the Baltics, where our NATO commitments would compel us to respond more forcefully. Providing defensive weapons to Ukraine actually decreases the odds of a dangerous US-Russian confrontation.

John E. Herbst is Director of the Dinu Patriciu Eurasia Center at the Atlantic Council. He served as the US Ambassador to Ukraine from 2003 to 2006.

Image: A Ukrainian serviceman fires a machine-gun at his position on the front line at the industrial zone of the government-held town of Avdiyivka, Ukraine, May 22, 2017. REUTERS/Oleksandr Klymenko