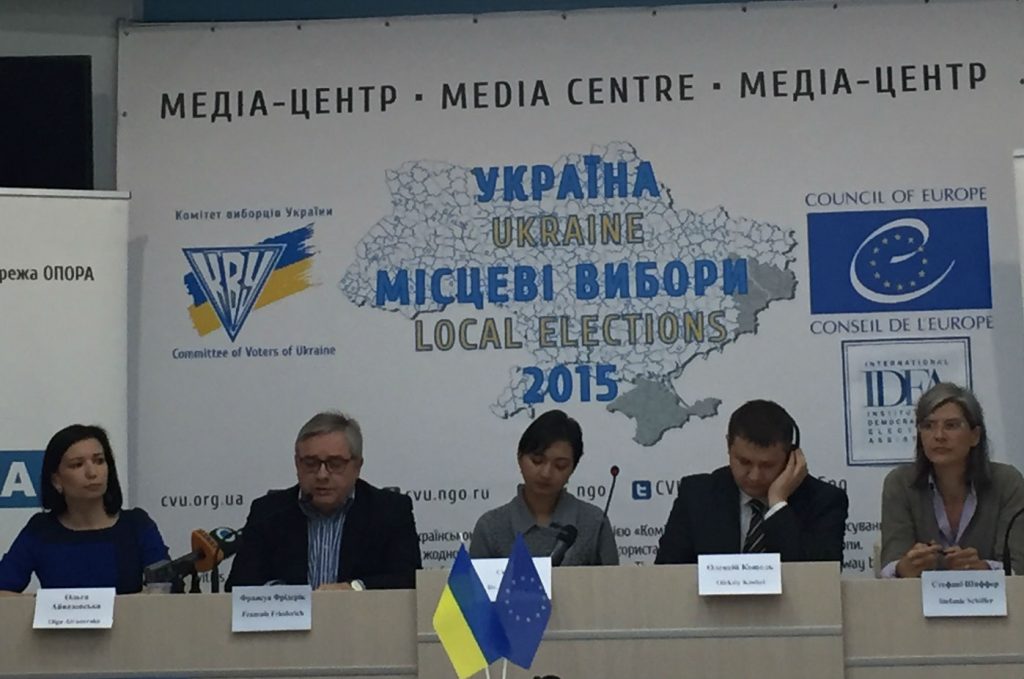 Kyiv, Ukraine – On Sunday, October 25, Ukrainians went to the polls to elect mayors and representatives to municipal councils. Under normal circumstances, local elections would go more or less unnoticed by international observers, but with no elections taking place in occupied territories, including Crimea and the Luhansk and Donetsk Peoples’ Republics, these are far from normal times. Approximately 1,500 international observers joined over 3,000 domestic observers to monitor the first local elections since the Euromaidan revolution.

With decentralization on the reform agenda, these elections are particularly important. Decentralization, which requires amending the Ukrainian constitution, is making its way through the Ukrainian parliament. The first reading of the amendment was approved by a two-thirds majority on September 1. These reforms would give local governments expansive control over their jurisdictions, including budgets, providing local representatives with more power than ever.

Decentralization has become a contentious issue in Ukraine, mainly because it is written into the Minsk ceasefire agreement, which many view as acquiescing to Russian demands for de facto autonomy for Russian separatist-controlled areas. But increased local governance was a key demand of Maidan activists, and civil society experts and advocates agree that greater local self-governance is crucial to curb the corruption that allowed former President Viktor Yanukovych’s government to steal billions of dollars from the state budget. The Reanimation Package of Reforms (RPR)—a network of activists and experts credited with drafting the reform agenda for the new government after Yanukovych fled the country—places decentralization at the top of the agenda for the next twelve months, along with anticorruption and judiciary reform.

Many international organizations, as well as European and American aid agencies, also list decentralization as one of their top priorities for 2016, according to Brian Fink, Director of the Office of Program Coordination and Strategy at the USAID mission in Kyiv. International organizations are expected to invest heavily in programs supporting decentralization, which, according to Fink, would bring the government closer to the people and pave the way for increased accountability at the local level.

But while local self-governance and increased accountability may sound like important goals that everyone should support, there is a catch.

In regions where new leaders and reformers are entering local government and civil society watchdogs are active, decentralization would likely result in increased transparency to the community. After all, under a localized governance structure, when citizens don’t see their tax dollars at work, they know who is to blame: the city mayor or council member who lives in their community and is embedded in local networks.

Unfortunately, this ideal scenario does not represent reality in many Ukrainian cities and towns, particularly in eastern regions where the same old faces of the Yanukovych-era Party of Regions, now reincarnated as the Opposition Bloc, continue to dominate politics. For example, in Dnipropetrovsk, the Opposition Bloc received almost 30 percent of the vote, according to Sunday’s exit polls. That party’s candidate for mayor, Oleksandr Vilkup, received 32 percent, putting him in close second after Ukrop’s Borys Filatov, who received 41.6 percent. Ukrop may be a newcomer in name, but the party is financed by Ihor Kolomoyskyi, Dnipropetrovsk’s former governor and a Ukrainian oligarch who still controls the region by financing politicians loyal to him.

As one of Ukraine’s major cities, Dnipropetrovsk is being closely watched by political analysts and civic groups which can exert pressure on the local government if the old ways of doing business set in. But smaller Ukrainian towns may slip under the radar. In places where the Opposition Bloc dominates and civic groups are not very active, the outcome of decentralization is likely to be the opposite of what’s intended: it could lay the groundwork for increased corruption through the consolidation of resources in the hands of a few, with little oversight from Kyiv.

For this reason, it is crucial that international organizations and Ukrainian civic groups focus their efforts on increasing civic and political participation in these areas, particularly the eastern regions. Kyiv-based civic groups like RPR have been effective in making themselves heard in national politics, but now the battle must move outside the capital. Experienced activists and nongovernmental organizations should provide support and training to fledgling community groups. In turn, international aid agencies with programs outside of Kyiv should identify and support regional efforts to raise awareness among local activists and citizens. This type of coordination can enable citizens to hold their leaders accountable when they don’t see positive changes in their communities.

After years in a highly centralized state structure, many Ukrainians view politics as something that happens in far-away Kyiv and doesn’t directly affect their everyday lives. Changing this mindset is no small task, and it won’t happen overnight. But if there was ever a time in Ukraine for change, it is now: a time when ordinary citizens, Ukrainian civic groups, and international organizations share the same ultimate goal of overcoming Ukraine’s Soviet legacy and years of corruption, and bringing power back to the people, where it rightfully belongs.

Alina Polyakova is the Associate Director of the Dinu Patriciu Eurasia Center at the Atlantic Council, where she oversees the Ukraine-in-Europe Initiative. She is the author of the recently published book, the Dark Side of European Integration, that examines the rise of far-right parties in Europe.