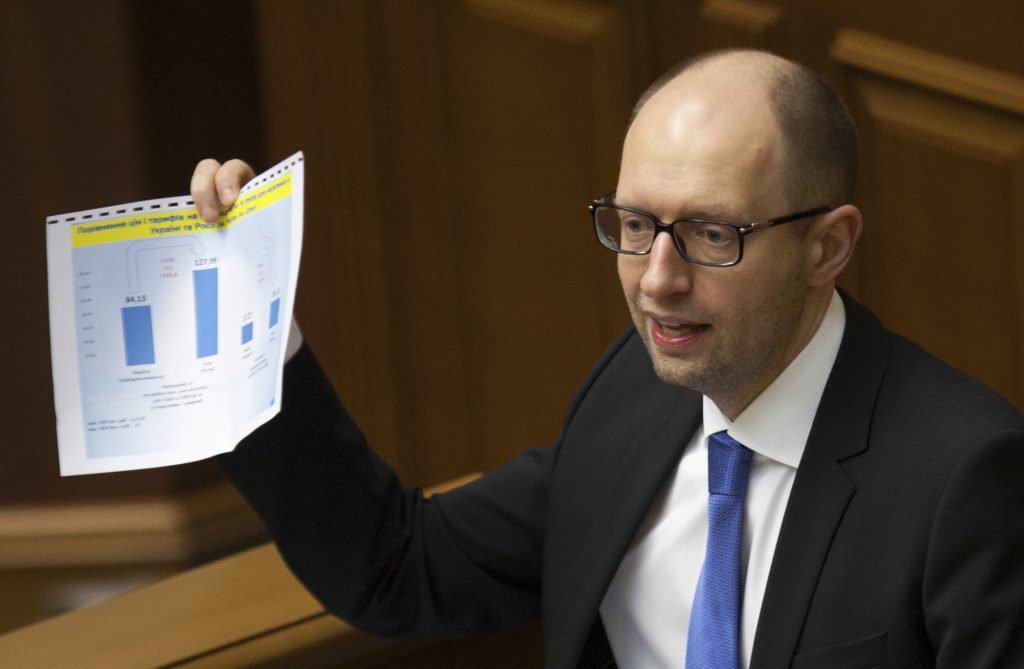 
Ukraine’s new government has unleashed a “tiger team” of ministers committed to quick and comprehensive reforms—but as that work begins, the costs of war and recession have pushed Ukraine to the edge of default.  Ukraine has begun to take steps to slash corruption, improve governance, and open up the economy, but its friends in the European Union and the United States have been much slower at assembling the $32 billion or more in loans now needed to keep Ukraine solvent through the difficult first years of its transformation. Ukraine’s allies act like they don’t realize that the reform of Ukraine’s could be undermined by an economic meltdown as easily as by Russian aggression or obstruction by corrupt local interest groups.

“We will do everything that was promised” to Ukraine’s allies, Prime Minister Arseniy Yatsenyuk told reporters after meeting European Union officials December 15, “but to overcome this period, Ukraine needs get some kind of cushion …of financial aid.” And needs it “yesterday,” he said.

Yatsenyuk is not alone in sounding the alarm. Donor nations, which are discussing the holding of a donors’ conference between January and March, “seem to be working on a totally different time agenda, with little sign of any urgency,” Standard Bank economist Timothy Ash wrote the day Yatsenyuk spoke. On Friday (December 19), Standard and Poor’s downgraded the country’s credit rating to Triple –C, one of the lowest rungs possible short of default.

Yet even the previously promised aid has been slow to arrive. While the IMF pledged $17 billion as the core of an international aid package in April, $4.51 billion has actually been disbursed, and delivery of the next tranche of aid has been delayed until next year.

Ukraine has been losing no time in organizing for reform since forming a new coalition with a two-thirds majority in parliament. It has passed a fifteen-page Action Program on reforms, focusing on “de-bureaucratization, decentralization, deregulation and responsibility.” This plan is serving as a basis for calculating a painfully austere 2015 budget that is scheduled to be presented to parliament this week. Finance Ministry officials reportedly have warned other ministries to be ready to slash their spending by as much as 25 percent.

The ministers’ challenge is to finds ways to transform their sectors quickly—rooting out corruption, and reducing the number of civil servants while sustaining or raising their salaries. They are preparing to transform the very nature of government services, shifting from the universal provision of cheap public goods and state aid to a more targeted provision of better quality services to those in need. With this, 2015 is likely to be a year when popular dissatisfaction will bring interest groups into the street, unless the president and prime minister can express a powerful new narrative of patriotic sacrifice for future gain. A critical part of that narrative is to credibly show Ukrainians that support from Europe and the transatlantic community is not only rhetorical but also includes a substantial financial boost.

Ukraine has a group of powerful new ministers who can help capture the public’s imagination. These include the three who are foreign born: Natalie Jaresko (finance), Aivaras Abromavicius (economics and trade) and Aleksandre Kvitashvili (health). Abromavicius, an investment banker from Lithuania, wants to see Ukraine climb next year from a rank of 112th to fiftieth on the Ease of Doing Business index. He wants overall public expenditures cut by 10 percent in the next two years, energy prices put to market levels, obligatory auditing of major state-owned companies by the major auditing firms, the state procurement system overhauled, and land reform begun in 2015. He has said to experts that he is confident that deregulation of the economy and other changes can already begin in the next two months.

Health Minister Kvitashvili, who held that position in Georgia and is an expert in health-sector reform, wants to significantly narrow his own ministry’s focus, taking it out of the highly corrupt sphere of medical procurement, to concentrate instead on making and monitoring policy, and responding to emergencies.

One of the few ministers to have kept his post after the October elections is Education Minister Serhii Kvit. In the coming months he realizes that he will have to close schools, organize a new certification process for teachers, transform the primary-secondary education system so it conforms to the twelve-year EU standard, and improve the autonomy of universities. But with an estimated 9 million Ukrainians involved in some way or another in the education sector and some half-million teachers taking home about $100 monthly salaries, Kvit faces powerful conservative interest groups already threatening to go into the streets. He says teachers tell him: “don’t speak to us about reforms, just let us survive.”

Kvit faces a particular burden in that the World Bank, which traditionally has helped reformist projects such as his, stopped working on education in Ukraine amid the extreme corruption of that sector during the administration of former President Viktor Yanukovych. So far the World Bank hasn’t appeared interested in returning to the education sector, despite the new minister’s clear commitment to reform.

The World Bank’s unwillingness to jump in to support even a reformist Ministry of Education is indicative of overall donor hesitancy to commit large amounts even now to Ukraine. On one hand the international community wants to see Ukraine’s new reformers deliver more concrete changes before further opening their purses, on the other, the new government needs to be able to show positive changes, such as better equipped schools, more modern curriculum, and better trained teachers to demonstrate that reform is more than just austerity. Ukraine has neither the funds nor in some cases the expertise to transform the country alone. Like its neighbors in the past it needs foreign expert funds and some know-how.

The International Monetary Fund, which sent a team to review Ukraine’s plans this month, reported December 19 that that “Ukrainian authorities are preparing to move decisively on a broad and comprehensive agenda to stabilize and reform the economy.” But the IMF also well knows that the government will not be able to carry out these reforms without more aid. Ukraine’s economy contracted by 6.5 percent in 2014; its currency (the hryvnia) lost 48 percent of its value against the dollar; foreign reserves have plummeted to $10 billion (enough to cover little more than a month of imports). Inflation is running above 20 percent annually, the fiscal deficit is in excess of 10 percent of GDP, and the banking sector is extremely vulnerable.

The IMF’s assessment is that “Ukraine will need $15 billion in addition to what is already planned,” European Commission President Claude Juncker told EU member states last week. “Ukraine will need more help…The assessment of Ukraine’s financing gap has been completed by the IMF. (Even this is very likely to be inadequate. The IMF said in September that Ukraine may need $19 billion within a year if the Russian-sponsored war in southeastern Ukraine continues.)

The EU and other donors are putting high conditionality on Ukraine for more aid. They have postponed a “Reform and Investment” conference which is supposed to link up Ukraine government asks for assistance with aid from international donors and investors until March 2015. For the EU, Ukraine must first draft an overall reform strategy, have a functioning donor coordination mechanism, and must begin implementing several concrete reforms before EU leaders will even agree to a date for the conference.

Conditionality is understandable, especially as Ukraine has disappointed so often in the past. But it should be clear to Ukraine’s partners and friends that the country has a new government committed to reform that will be able to accomplish the needed change and survive politically only if substantially more aid is forthcoming, and quickly.

These are extraordinary times for Ukraine and for the region, and they require extraordinary solutions. According to Stefka Slavova, an economist working in Ukraine with the Strategic Advisory Group Secretariat, a project sponsored by  the Open Society Foundations,, “this means much more than what is currently on offer from the IMF but still less than the [2011] Greek bailout package of over 200 billion euros.” To assemble the resources necessary, both policymakers and publics in Europe and the United States will need to understand that winning the battle for Ukraine on a political and economic level is as important to Europe’s future as was keeping Greece afloat only a few years ago.

Sabine Freizer is a senior fellow of the Atlantic Council based in Istanbul. She serves as an adviser to the Open Society Foundations in Ukraine.