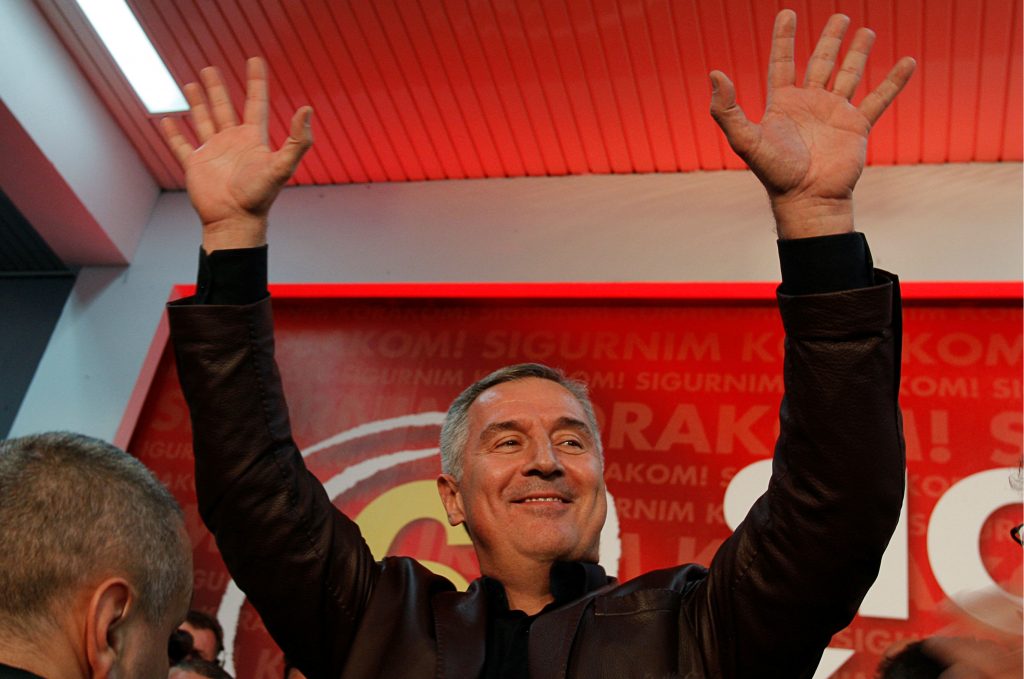 On October 16, just hours before Montenegrins were due to head to the polls, the government made an alarming announcement. It claimed security services had foiled a Russian nationalist attempt to seize control of the parliament and assassinate Prime Minister Milo Djukanovic (who has since resigned).

The Kremlin undoubtedly has an axe to grind with the Montenegrin leader. Djukanovic’s support for economic sanctions on Russia over the annexation of Crimea, and his determination to take his country into NATO, have not won him any friends in Moscow. But politics in the Balkans is rarely a straightforward affair.

As critics were quick to point out, the alleged assassination plot came at a convenient moment for Djukanovic and his Democratic Party of Socialists, who had been under pressure from anti-government demonstrators in the build-up to the election. Or as the Democratic Front, Montenegro’s main pro-Russian opposition party, put it, the incident was “a cheap, staged and performed vaudeville coup” aimed at scaring voters into maintaining the status quo.

While the claim that a prime minister staged a coup to win an election may seem outlandish, investigative journalists and opposition parties have long accused him of corruption, including vote-rigging, and having ties to organized crime. Djukanovic, who has ruled the country for most of the last two and half decades, was awarded the dubious title of ‘2015 Man of the Year in Organized Crime’ by the Organized Crime and Corruption Reporting Project.

Nearly two months on, details of the alleged coup plot remain murky. Last month, Montenegro announced it had made twenty arrests, but most of the suspects were later released. Among them was Aleksander Sindjelic, a veteran Serbian nationalist and fighter in east Ukraine, who was granted ‘protected witness status’—a fact that proves the coup was faked, according to Montenegro’s opposition.

“I think what a lot of people are saying right now is, if I’m going to believe the Montenegrin government, I want some damn sight better evidence than they’re providing,” says James Ker-Lindsay, a senior research fellow on the politics of southeast Europe at the London School of Economics.

“On the one hand you say there might be a plausible case that Russia’s hand is in this, but on the other hand this came precisely at the right moment, and I wouldn’t put anything past [Djukanovic] to try and stay in power,” he adds.

Coup aside, what is not in doubt is that Russia has been steadily working to regain a foothold in the western Balkan region by promoting a Pan-Slavic identity through cultural and political channels. The approach, which frames Moscow as the protector and natural leader of Orthodox Slavs, seeks to challenge EU and NATO expansion into the region, particularly in Montenegro and neighboring Serbia.

In Belgrade, Serbia’s capital, Russia’s growing influence can be felt on the street. Putin souvenirs sold in kiosks on the main shopping strip are “best-sellers,” according to vendors. Among them are fridge magnets with a photoshopped image of Russian President Vladimir Putin in a Chetnik hat, and T-shirts featuring him in camouflage gear with the slogan ‘the politest of people’ —a hat-tip to the so-called ‘little green men’ that invaded Ukraine’s southern peninsula in 2014.

The western Balkans, however, are not Crimea or east Ukraine. At the most basic level, Moscow is more than 1,200 miles from Podgorica and Belgrade, with several EU countries in between. Rolling tanks across the border is clearly not an option. And while support for the EU in the region may be lackluster, it is for now at least the route being pursued by both countries; recent elections in Serbia and Montenegro have returned governments that campaigned on pro-West platforms.

That said, the prospect of EU membership has lost allure in recent years. In Serbia, support for the bloc has dropped by 32 points since 2009, and currently hovers around 41 percent. In Montenegro, it’s a slightly better 54 percent, but still down three points as of 2014.

The reasons for this are manifold. The accession process for both countries has dragged on for years, and will likely do so for several more. The EU has put a freeze on enlargement until at least 2020, but even this seems an optimistic deadline given the current rate of progress.

Tumultuous times in Europe, from the financial crisis to the migrant crisis and the rise of the far-right, have also served to further dampen public support for joining the bloc. But it’s not just geopolitical circumstance that is making public support so lukewarm. While the EU is distracted with its own internal problems, Moscow has quietly stepped up its efforts to win hearts and minds.

In January, Sputnik, a Kremlin-backed online media outlet, celebrated its first anniversary of publishing in Serbian with an announcement that its app had been downloaded more than 100,000 times. The publication, which also has a locally-syndicated radio show, promotes Russia’s worldview and often runs virulently anti-Western content. Recent articles in its Europe section included a piece on a secret deal between Turkey and the EU to trap a “tsunami” of migrants in Serbia, and another on the end of the “epoch of Western dominance.”

Deepening their impact, its stories are often picked up by Serbia’s burgeoning tabloid press, which is also a popular source of news for Serbian speakers in Montenegro, Macedonia, and North Kosovo.

“These [Russian] news services in the Serbian language are very proactive, and they’re filling a void because of the nature of media here—there’s a lack of investment in real journalism,” says Daniel Sunter, a defense and security analyst.

Alongside its media campaign, Russia has also pursued a low-cost, high-impact effort at the United Nations. There, it has used its veto power to block resolutions opposed by Belgrade, most notably on the recognition of Kosovo as a sovereign state and, more recently, on the condemnation of the Srebrenica massacre as an act of genocide.

In a similar vein, earlier this year, Moscow also backed a controversial referendum in Republika Srpska, the Serb entity in Bosnia and Herzegovina. The vote was so widely seen as stoking ethnic tensions that even Belgrade refused to endorse it.

Moscow’s unwavering support for these issues creates the idea in people’s minds that “Russia is providing real unconditional friendship,” says Ker-Lindsay. “Of course that’s not true, Russia has demanded to get into Serbia’s energy industry… and Serbia now owes Moscow for two security council vetoes.”

Other stunts, such as a ‘Slavic Brotherhood’ war games drill held jointly with Serbian, Montenegrin, and Russian troops in October, and the inauguration in Podgorica of a ‘Balkan Cossack Army’ attended by the Night Wolves, a motorbike gang with close ties to Putin, are more for show. Neither Montenegro or Serbia have an army of any real size.

Nonetheless, the combined impact of all these endeavors is significant. A 2015 International Republican Institute poll found 94 percent of Serbs support maintaining strong ties with Russia. Moscow’s support on the Kosovo issue, and its willingness to “stand up to” the West, were cited as key reasons. Around a third of respondents also incorrectly identified Russia as the biggest financial donor to their country.

In Montenegro, too, the EU has struggled to get its message across. Although the bloc has poured some 235 million euros into the country over the last decade, Montenegro’s ambassador to the EU, Mitja Drobnic, admitted that “not enough people know that Montenegro benefits from EU funds… let alone that the EU is the largest international donor.” According to a recent poll, only 11 percent of Montenegrins feel they have access to comprehensive information about accession.

For the EU, the situation is not yet a disaster, but policy makers must act now to end a culture of complacency that sees countries on Europe’s periphery as reflexively wanting to join the bloc. In fact, if referendums on membership were held in Montenegro and Serbia tomorrow, the results could well kibosh the two countries’ accession bids.

Yet the solution is not as simple as expediting the process. Doing so could, at worst, mean ushering in countries that may later pivot back toward Russia. At best, it would risk repeating the mistakes of 2007, when woefully underprepared Bulgaria and Romania were given entry, leaving a wide range of corruption and governance issues unresolved.

Key issues relating to EU accession such as corruption and press freedom are far from resolved in both Serbia and Montenegro. Human Rights Watch recently warned that western Balkan countries had “failed to take concrete action” to address “impediments to media,” and Freedom House rates the press in both as only “partly free.”

For the EU, the road to further enlargement, and indeed the role it wants to play in the region, will require plenty of soul searching. In part, this means doing a better job of promoting the good it is doing in the region, particularly in terms of financial investment, but it must also move swiftly to pressure governments it has aligned itself with to improve democratic standards and tackle corruption. If the EU fails to do this, it will ultimately undermine itself much more than Moscow is ever able to.

Image: Montenegrin Prime Minister and leader of ruling Democratic Party of Socialist Milo Djukanovic waves to supporters after the parliamentary elections in Podgorica, Montenegro, October 17, 2016. He claimed his government had foiled a coup plot orchestrated by the Russians. He resigned on October 25. REUTERS/Stevo Vasiljevic