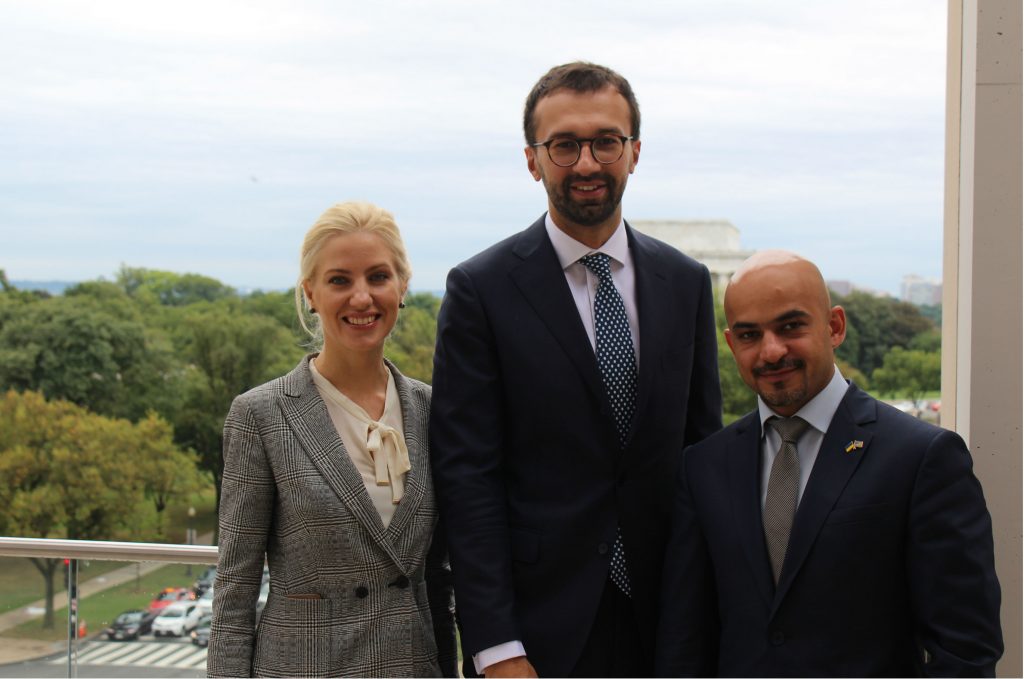 Ukraine now has a liberal European party, but can it become a nationwide party with real heft in parliament?

Currently, the Democratic Alliance enjoys only a three percent approval rating, and some of its leaders remain largely unknown. According to the International Republican Institute’s recent polling, 81 percent of Ukrainians don’t know who Svitlana Zalishchuk is, 58 percent are unfamiliar with Sergii Leshchenko, and 30 percent have never heard of Mustafa Nayyem.

In fact, the three are young members of parliament who were actively involved in the Euromaidan. Many credit Nayyem with bringing millions to the streets with his Facebook and Twitter appeals after former President Viktor Yanukovych refused to sign the EU’s Association Agreement in November 2013.

But this lack of familiarity is a real problem, especially for Zalishchuk, who was elected co-chair of the Democratic Alliance on July 9, together with Vasyl Gatsko. (The three parliamentarians officially remain part of the Poroshenko Bloc in parliament.)

On September 27, I sat down with Zalishchuk, Leshchenko, and Nayyem in Washington to discuss the new party and the overall direction of the country.

“We have just started the real big political life. Especially for me,” she added. Prior to her 2014 election, the polished, fair-haired Zalishchuk led Centre UA, a civic organization, and was a cofounder of another one, Chesno.

She wasn’t easily put off by the low numbers. “It means that 19 percent actually know something…Eight million people…and this is already a lot.”

Leshchenko, lanky and bespectacled, had a different explanation for the statistics. The former investigative journalist who still writes regularly for Novoe Vreyma said that he’s not allowed on most national television stations, including Inter or 1+1, and therefore the public doesn’t know him.

“We really wanted to enter the system to change it,” said Nayyem, a former TV journalist.

“We had a choice. One choice was to stay in civil society and journalism,” Zalishchuk said.

Instead, the three plunged in.

For Zalishchuk, the numbers give them a clear task: increase their visibility, learn new political rules, and use tools to get through to society. All three already actively use Facebook to communicate with supporters.

The next presidential and parliamentary elections aren’t slated until 2019, and the new rules governing public financing of campaigns are unlikely to help the new party in either election.

The party plans to accept small donations solely from individuals, which is a first in Ukraine. The Democratic Alliance together with a serious of anticorruption forums that were held across the country last winter has raised two million hryvnia (about $100,000) in small donations in the first half of 2016, and this gives the party confidence that more can be raised. Additionally, the party already has regional branches that it can build upon.

Zalishchuk said the party is making trips to all twenty-four regions of Ukraine, holding public meetings, and meeting with local businesses as well as promoting its ideas on social media.

She expects the party to appeal to young, college-educated voters, small and medium business owners, and the middle class.

Ukraine’s parliament, which has at least seven major factions, is a fractious place where passing any legislation within the fragile coalition is difficult. All three politicians emphasized the need for unity in order to achieve their goals in parliament, but they differed on specifics. Zalishchuk and Leshchenko said they would be willing to work with Nadiya Savchenko, the returned POW who currently ranks as the most popular politician in the country, while Nayyem said absolutely not. They consider the Lviv-based Self Reliance party an ally.

“They aren’t real parties,” Leshchenko said, referring to People’s Front and the Poroshenko Bloc. “They’re business clubs that sprang up before the elections.”

“The biggest obstacle now for us and for all pro-European people in the country…is weakness of power. Weakness of government institutions and lack of leadership,” said Nayyem.

The current government is “not up to the task,” Zalishchuk said. It doesn’t have the capacity and cannot offer the level of transparency and independent institutions that people want, she said.

Nayyem’s top three priorities are ambitious: he wants to fix Ukraine’s law enforcement, resolve the war in eastern Ukraine, and change the mentality of the country. He sees progress on the first front. The new patrol police are a symbol of hope, he said.

Discussing the war, he grew animated. “This is our territory. We are not going to avoid this problem,” he said.

But changing the mentality of the country will require long time horizons. “If we will not invest in the future, our children and nephews will encounter the same problems that we have,” said Nayyem. “Many children in Ukraine have never seen foreigners,” He urged people who support Ukraine to volunteer to teach English with Go Global, which offers free English lessons to children in the summer.

Leshchenko, the most soft-spoken of the three, waited patiently for Zalishchuk and Nayem to finish before he leaned in to take his turn.

“Corruption is the main threat for Ukraine’s successful development,” he said. He doesn’t see progress. He spent the week in Washington urging US government officials to increase sanctions on individual members of Poroshenko’s inner circle.

Leshchenko said his main focus now is to “protect NABU (the National Anti-Corruption Bureau of Ukraine) as much as possible.” A proposal in parliament would allow the prosecutor general to decide which law enforcement body gets to investigate a corruption-related crime; currently, that task falls to NABU.

So far, NABU has been unable to successfully prosecute a case. Twenty-five of the thirty cases it has sent to court are waiting on judges, who are dragging their feet. According to the Anti-Corruption Action Center, the other five were resolved because the defendant admitted guilt. To remedy the problem, Leshchenko wants an independent anticorruption court, so that all cases go before an unbiased judge.

Even so, he admitted that Ukraine’s politics have changed for the better since the Euromaidan.

“We have a completely different situation” now, said Leshchenko. “Corrupt politicians can’t dictate everything anymore because of civil society organizations and the National Anti-Corruption Bureau of Ukraine, and ministers who don’t agree with the status quo of corruption,” he said.