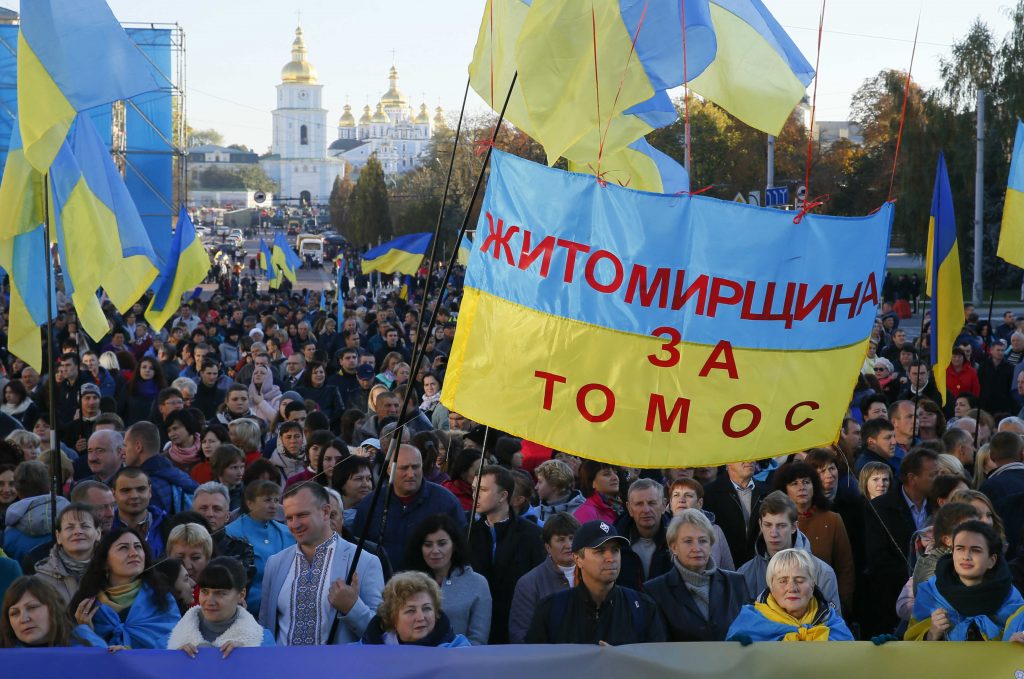 People gather to express gratitude to the Istanbul-based Ecumenical Patriarchate for granting approval to establish the country's independent, or "autocephalous,"church in Kyiv, Ukraine October 14, 2018. REUTERS/Gleb Garanich

Ukraine has just won a tremendous victory by obtaining the right of autocephaly, or the right to constitute the Ukrainian Orthodox Church as fully independent and free of any subservience to Moscow. This victory represents a shattering blow to Vladimir Putin’s pretenses of a Russian world (Russkii Mir) and the entire arcana imperii (Imperial relics) of the Russian narrative that Ukraine is really a part of Russia that does not merit political or cultural independence. The attainment of autocephaly is actually Ukraine’s second emancipation from Moscow; it is a religious and cultural emancipation that accompanies the country’s political emancipation in 1991. And it shatters the intellectual basis for Putin’s attacks on Ukraine.

Putin will go down in history, not as a gatherer of Russian lands, but as someone who like Mikhail Gorbachev, lost more of the empire. And for that reason, this decision is also fraught with danger for Ukraine.  Moscow has already severed ties with the Ecumenical Patriarchate of Constantinople and claimed that it retains the right to protect the religious rights of its people. We ought to understand this claim as a long-standing casus belli dating back to Ivan the Terrible. Even Stalin utilized it, albeit in secularized form, as the right to protect Soviet citizens as he annexed Western Belarus and Western Ukraine in 1939. Likewise, this was the cause for war for Russia’s intervention in the Ottoman Empire from 1774-1854 and the principle by which Russia justified its actions that led to the Crimean War. The invocation of this alleged right to protect is a red flag, particularly as Moscow invoked it as well in regard to Georgia and Crimea.

The likelihood of a new round of force is not limited to attempts to seize control of the 12,000 or so churches in Ukraine that are part of the Russian Orthodox Church and provoke civil strife that could furnish a pretext for further intervention. It also includes Russian troops on the front lines and the maritime forces arrayed against Ukraine in the Black Sea and the Sea of Azov. Those latter forces could undertake a series of actions ranging from a blockade of the coast line to maritime shelling of coastal cities, not the least of which would be Odesa, or such shelling in conjunction with further land force incursions into Ukraine, or an amphibious operation against the Ukrainian coastline anywhere from Odesa to Mariupol.  Moscow’s superiority in the theater affords it many options, and Ukraine and its Western partners must think through these various scenarios.

In addition, Moscow’s threats and responses to Ukrainian autocephaly demonstrate that the issue is not a religious one but centers on power. Because Putin’s own legitimacy is at stake, we can expect greater pressures on Kyiv to create a schism in the country or coerce it into religious and other forms of submission. In addition, the fact that this is not a theological dispute speaks volumes about the Russian Orthodox Church. This episode clearly shows that the church remains a state institution and an instrument of Russian imperialism. Indeed, it would be difficult to imagine it as anything else, since it has been honeycombed for generations with members of the KGB and today’s “special services” and because of the intimate financial connections between the church and the ruling elite. The close contacts among oligarchs, the elite, and the church on the basis of the glorification of the Russian state and its alleged mission go a long way to explain the phenomenon of supposedly devout current or former members of the KGB and FSB. This is a political religion in which theology is ultimately another narrative of imperial domination.

And it is precisely for these reasons that Ukraine’s victory in attaining autocephaly is so momentous. Ukraine now has a chance to be not only politically independent, but religiously and culturally free as well and create an authentic national culture that is based on the aspirations of all of its citizens whatever their creed, not on the arcana imperii of the Russian empire and its inherent presumption of Ukrainian inferiority. And for that reason, too, this represents a stunning defeat for Putin. All those people here and elsewhere who keep thinking that Putin is always winning or some mastermind must come to terms with the fact that by his obduracy and imperial hysteria he has engineered one of the greatest defeats that Russia has ever suffered. And this is only the beginning. That makes the situation much more dangerous, but the danger does not eclipse the reality of Ukraine’s second emancipation and Moscow’s ignominious defeat.