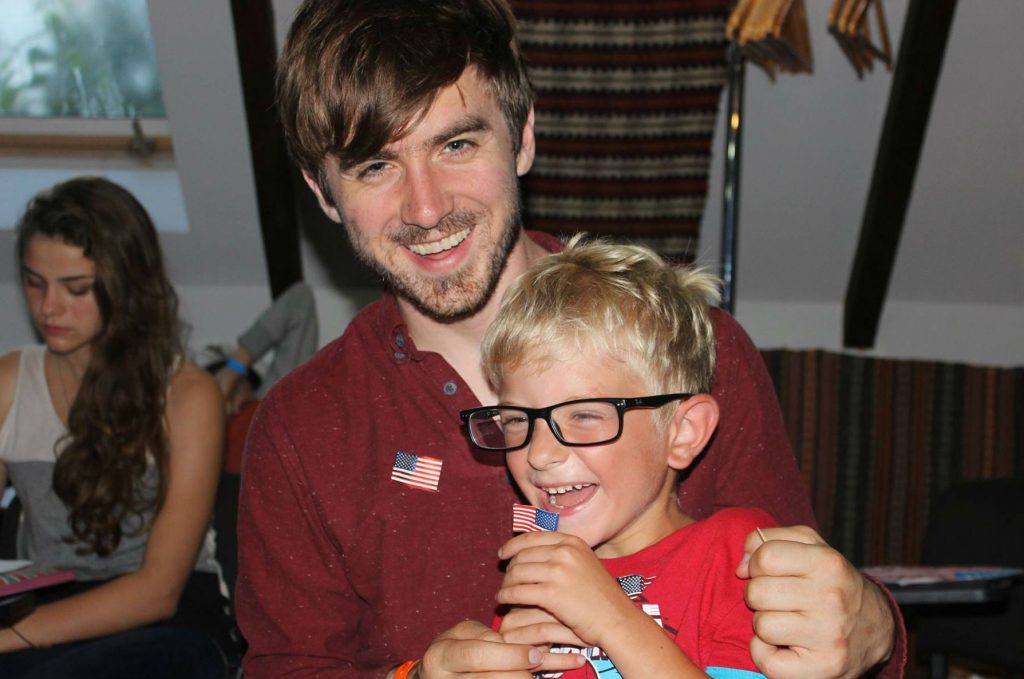 Camp America, located at a charmingly rustic resort in Ukraine’s Carpathian Mountains, welcomed twenty young Ukrainians for a week in August. For most of them, Camp America—a 24/7 English-language environment where all activities are conducted in English—was their first experience with native English speakers.

“I like to tell our students that there are three international languages: English, music, and sport,” Alexa Chopivsky wrote in a September 2 interview. “No matter what your future plans or goals, in today’s globalized world, you have to speak English.”

Camp America is an initiative of Chopivsky, the 36-year-old chief executive officer and founder of Transnational Education Group (TEG). Established in 2012, TEG runs two programs—Camp America and the Washington Summer Business & Diplomacy Leadership Academy—that expose Ukraine’s future leaders to an international worldview and engages them beyond their comfort zone.

Unlike other exchange programs, TEG focuses on the early student years, because Chopivsky believes “global citizen values” are best learned in this formative period.

“This next generation of young Ukrainians…are the guardians of Ukraine’s future and, accordingly, need to have opportunities for international exposure and experience, and to broaden their worldview,” she wrote.

Chopivsky, whose Ukrainian grandparents emigrated to the United States after surviving the World War II slave labor camps of Germany, developed the idea for Camp America out of a strong sense of gratitude to the country that gave her family refuge.

“I am grateful for the American values I learned growing up: hard work, responsibility, integrity, equality, respect for differences, volunteerism, optimism, and a belief in progress and change—and for the opportunities this country afforded my immigrant family,” Chopivsky wrote.

The war raging in eastern Ukraine may be hundreds of miles away, but it’s still a daily reality for the campers, some of whom had parents fighting or volunteering on the front.

Camp America’s goal is to inspire Ukraine’s youth to learn English, believe in a bright future, and strive to achieve their own version of the American dream by setting goals and working hard.

“At Camp America I improved my English so much that I have [a] clear American accent now,” wrote 15-year-old Timur. In an evaluation, Timur said Camp America was the best camp he had ever been to.

The camp’s innovative curriculum uses games and nature to create a fun learning environment, integrating US history, politics, traditions, holidays, and film into the lessons. “We try to act as a bridge between the two countries and convey the best of what it means to be American,” Chopivsky wrote.

After yoga and exercise, campers spend mornings in an intensive English class taught by American teachers. After lunch and a break, campers hike and swim, study journalism or etiquette, and then prepare for evening activities. Using Skype, campers have a unique opportunity to interact with leaders in Washington, DC. Speakers have included journalists, diplomats, and real-estate developers.

The camp lasts only a week, but a different US holiday is celebrated every day. Campers learn the vocabulary and traditions associated with each holiday.

Halloween was a hit at Camp America.

On Independence Day, for example, campers study the concept of balance of power and its importance in ensuring accountability and eliminating corruption. Kids “run for office” and deliver campaign speeches on-camera as part of Camp America’s journalism school. Drawing on Chopivsky’s background as a former NBC News journalist and Columbia School of Journalism graduate, students get feedback on their performances.

Thanksgiving is another big holiday at Camp America, complete with cranberries and stuffing. Students learn about the pilgrims and are asked to express gratitude and thankfulness throughout the day. Turkeys are notoriously difficult to track down, but TEG’s local staff managed to locate ducks as a replacement.

Campers celebrated Thanskgiving and were asked to reflect on their blessings.

Most campers hailed from Kyiv, which is to be expected since TEG’s office is based there, but the organization wants to work with students from across Ukraine—especially with internally displaced persons and children of Ukrainian soldiers.

Ten Americans and Ukrainians were directly involved in the planning and execution of Camp America, which welcomes both US and Ukrainian volunteers.

After only a week teaching English at Camp America, Alex Olthoff of Washington, D.C., saw improvements in confidence and motivation. “Many students went from speaking very little to speaking in full sentences, and those who were already at intermediate level progressed in confidence, fluency, and in vocabulary usage,” he wrote.

“I really improved my English! Before camp I was in the United States and I couldn’t speak and I didn’t understand anything,” Yasia wrote. Now the 12-year-old plans to take additional English classes so that she might eventually study in the United States.

“I remember everything like it was yesterday and the magical atmosphere of friendship can’t leave my mind even today,” Kirill wrote.

TEG is working to raise funds to expand, and plans to hold a winter camp in early 2016 and more sessions next summer.

Image: English teacher Alex Olthoff of Washington, DC, saw improvements in confidence and motivation after only a week teaching English at Camp America. “Many students went from speaking very little to speaking in full sentences, and those who were already at intermediate level progressed in confidence, fluency, and in vocabulary usage,” he wrote. Credit: Transnational Education Group