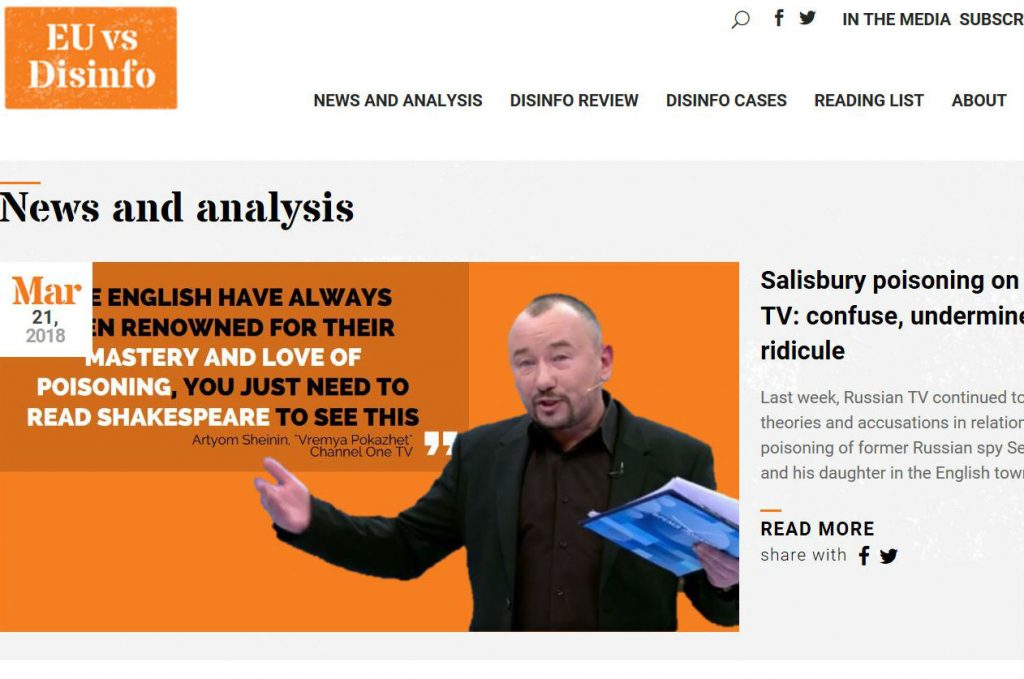 A crucial program that identifies Kremlin methods of disinformation has come under attack. Alarmingly, one of the key accusations is that its activities constitute an attempt to restrict freedom of speech. The situation could not be more absurd.

The program running into such controversy is the East Stratcom Task Force and the EU vs Disinfo website that the task force runs. Back in March 2015, EU heads of state decided to create the task force, to be run by the European External Action Service, in response to Russian disinformation campaigns.

Russia’s “information war” had escalated in 2014, with disinformation and virulent propaganda used to justify its annexation of Crimea and military aggression in eastern Ukraine. It was probably the downing of MH17 on July 17, 2014, with the death of 298 passengers, that served as a wake-up call to the West,

While establishing the task force in response, however, there was disagreement between the twenty-eight member states, with those nearest to Russia supporting broader measures, while others wanted a narrower scope in order to avoid antagonizing Russia.

As a result, the task force has been under-resourced and under-staffed, and it is an enormous credit to its team that they have achieved so much. The EU vs Disinfo website that they run is a widely-used and cited source of information about Russia’s disinformation methods, as well as about disinformation cases in general. In a recent entry entitled “Skripal and the Disinformation Swamp,” for example, the team gives examples of Russian media attempts to “peddle multiple, unsubstantiated, and often absurd conspiracy theories” about the poisoning of former Russian spy Sergei Skripal and his daughter with a Russian nerve agent.

This is, as they note, a standard Russian disinformation technique aimed at confusing a wider audience. They point to its clear similarities to methods that were used to mislead viewers into believing that there are multiple versions of the downing of MH17, although this is known to have been by a Russian BUK missile.

Such monitoring is also vital for understanding how a domestic audience is simultaneously fed a different message—namely, that “traitors” really do “end badly,” as Russian President Vladimir Putin put it.

Another reason why such monitoring is important is that the same methods are used elsewhere to manipulate public opinion, and they filter into European media. This has been particularly evident in the attempts to fan anti-refugee sentiments in Europe. Manipulative tactics and deliberate disinformation were also frequently used by the media, and by no means only Russian, during the US presidential election and before the vote on Brexit in the UK.

Although the EU vs Disinformation campaign stresses on its website that cases it identifies may not be linked to the Kremlin or pro-Kremlin groups, and may not have set out to mislead their audience, they are in a section called disinformation cases.

This was where the problem arose: three Dutch publications took exception to their material being identified as such. In one case, the editor of the piece later agreed that the story’s title had been misleading and changed it, after which the text was removed. In two cases there had been a translation error and the team reacted swiftly and removed the material.

This should have been the end of it, especially given that the texts were all posted in 2015, when the task force was still getting its bearings. Three mistakes in three years is hardly a bad record.

Instead, the Dutch media began questioning whether the EU should be involved in such monitoring and suggested that this was a restriction on freedom of expression. It reached the stage of a resolution that was passed by a large majority of the Dutch parliament; the resolution called on the government “to speak out forcefully in the European context for the protection of our media and to try to find support for the abolition of EU vs Disinfo.”

In the original lawsuit by the three Dutch publications, which has since been dropped, the plaintiffs alleged that the material had been labeled disinformation merely because it was critical of Ukraine.

Although it is unclear whether the government will take any active steps on this or if other EU countries will go along with them, the arguments being put forward seem disturbingly off the mark. There are claims, for example, that the EU should not be involved in identifying disinformation cases.

For example, Peter Burger, one of the vocal critics of EU vs Disinfo, did not deny the need for disinformation monitors, but felt that this should not be entrusted to the EU; instead, he said, it should “if necessary, [be] funded by governments.” Renske Leijten, a Dutch MP,  went even further, asserting that the site offends democratic principles and that “civil servants who should be controlled by the media…are handing out judgments on journalists.” He says that the Dutch intelligence services and Dutch journalists and academics should do the job of countering foreign interference instead.

But the idea that national institutions are to be more trusted is misguided. In 2015, Poland’s right wing Law and Justice, or PiS, government—backed by a president willing to sign almost anything—took control of public broadcasting. It now regularly uses these mediums to claim that legitimate criticism of its destruction of the independent judiciary is fake news.

An independent watchdog overseen by the EU has far more chance of working without bias than a national government institution. There is nothing against democracy in warning people how the media, and especially state-sponsored Russian disinformation, use techniques of manipulation and false narratives; it is legitimate to foster critical skills that are necessary in order to not be duped. All that is required is the funding and the staff to ensure that they do it well. The EU vs Disinfo team has been doing a commendable job, and they must be allowed to continue it.

Image: A screenshot of the EU vs Disinfo web page.