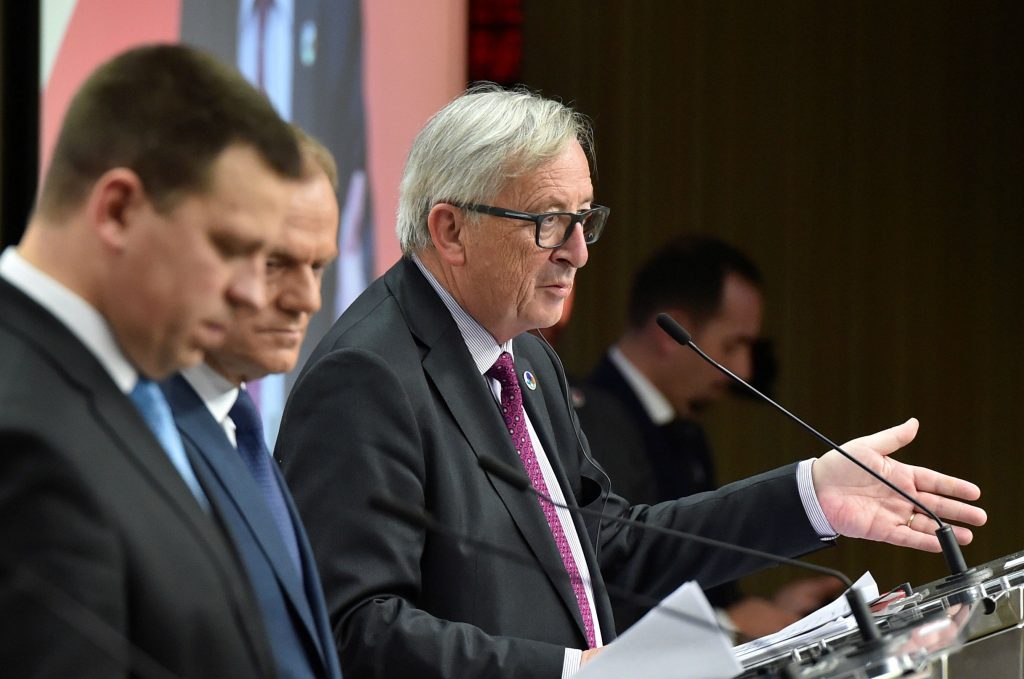 If you missed the European Union’s Eastern Partnership summit in Brussels on November 24, you are not alone. It was a forgettable event, but it tells us quite a bit about the EU’s state of affairs in Eastern Europe.

The proud start of the EU Eastern Partnership was the Prague summit in May 2009, instigated by Foreign Ministers Carl Bildt of Sweden and Radoslaw Sikorski of Poland. These heroes of East-West integration are out of office, and we feel their absence keenly.

In 2009, the essence of the joint declaration between the six members of the Eastern Partnership, Armenia, Azerbaijan, Belarus, Georgia, Moldova, and Ukraine, was “that the Eastern Partnership will be based on commitments to the principles of international law and to fundamental values, including democracy, the rule of law, and the respect for human rights and fundamental freedoms, as well as to, market economy, sustainable development, and good governance.” Today, little remains but threadbare slogans.

The Eastern Partnership advanced until the Vilnius Eastern Partnership summit in November 2013, as Armenia, Georgia, Moldova, and Ukraine negotiated association agreements, including deep and comprehensive free trade agreements. In Vilnius, Ukraine was supposed to sign its association agreement, but Russia’s President Vladimir Putin persuaded Ukraine’s President Viktor Yanukovych not to do so. He had already done so with Armenia’s President Serzh Sargzian in September 2013. Only Georgia and Moldova held fast and signed their EU agreements.

The next Eastern Partnership summit in Riga in May 2015 marked the decline. The fault did not lie with Latvia but with the EU’s lack of strategy.

It is easy to ridicule this latest Eastern Partnership summit, and sadly there are good reasons for doing so. Any American can be nothing but surprised by the choice of headline for this summit: “Stronger together!” The EU adopted the slogan of Hillary Clinton’s failed presidential campaign. Needless to say, it went downhill from there. As is usually the case with international conference communiqués, the paucity of substance is remarkable, but this is a region in which the EU could matter greatly.

First, the Eastern Partnership consists of six states, three are struggling democracies—Georgia, Moldova, and Ukraine, while three are authoritarian states— Armenia, Azerbaijan, and Belarus. At present, it makes little sense for the EU to keep them together. Thus, the EU is unlikely to be able to help the three shaky democracies, while it will do nothing for the three others. This is a serious mistake.

The main news item from the summit was that the EU concluded a pretty meaningless “Comprehensive and Enhanced Partnership Agreement” with Armenia, which is far less significant than its abortive EU association agreement of 2013. Instead, the EU should have adopted a strategy for Georgia, Moldova, and Ukraine, and given some benefit to Georgia which has done far more than the others.

Second, the most important issue in this part of the world is the Russian military aggression against Ukraine since 2014. Needless to say, the EU was unable to mention military aggression or even Russia. It stopped with the euphemism: “The European Union committed its support to the territorial integrity, independence, and sovereignty of all its partners.” The EU made clear that it offers no security or even sympathy.

Third, the key issue in the former Soviet Union is to establish the rule of law and real private property rights, but this is not a focus of the EU. The joint declaration contains general platitudes: “The Summit participants recommit themselves to strengthening democracy, rule of law, human rights, and fundamental freedoms, as well as principle and norms of international law which are at the heart of the Eastern Partnership.” Since strictly authoritarian Belarus and Azerbaijan sat at the table, this was not for real.

Fourth, the most important economic elements would be significant financial support from the EU and more market access to the EU market to which access is highly restricted because of the many and small quotas in the free trade agreements that the EU has concluded with Georgia, Moldova, and Ukraine. The Central European Free Trade Agreement, which would be beneficial for Georgia and Ukraine to join, is not even mentioned.

After having promised absolutely nothing, the EU declaration started talking about “more for more,” which will “benefit those partners most engaged in reforms.” But nothing is offered which is what the still reformist Georgian government is experiencing, while the Ukrainian and Moldovan governments seem to have given up on this European Commission.

What the EU actually told the Eastern Partnership countries in Brussels is less for less. The EU does nothing for their security; it does not reward good reforms; and it offers neither market access nor significant financial support. But is any foreign country more important for the EU than Ukraine?

Needless to say, these European states were not offered any perspective of what they desire most of all, EU membership, but perhaps we need to be grateful that they at least got a summit with EU members.