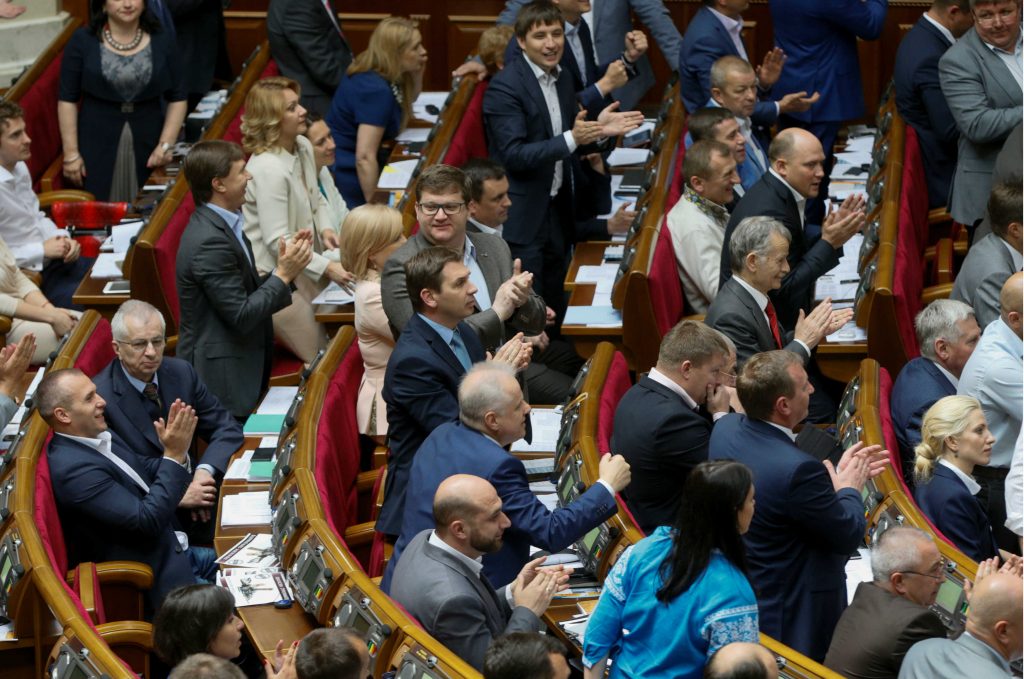 Ukrainian deputies react after approving changes to the constitution required for judicial reform, at the parliament in Kyiv, Ukraine, June 2, 2016. REUTERS/Valentyn Ogirenko

Ukraine’s parliament has ignored warnings from human rights organizations and the Reanimation Package of Reforms and passed constitutional amendments and a bill on the judicial system which retain the old ways of exerting influence on judges. There was enormous pressure for judicial reform, and many of the changes are needed. The warnings, however, highlight real problems that were not addressed before the votes on June 2.

The Reanimation Package of Reforms (RPR) had warned that the bill on judicial reform will enable court presidents and their deputies, appointed under President Viktor Yanukovych and accustomed to heeding political orders, to retain their posts for six more years. Court presidents are judges, but they also run the courts and have considerable influence over which cases are heard by specific judges. There was theoretically an automated system for assigning cases to judges, but it is widely believed that court presidents ensured that cases went to the “right” judges and that the “right” decision was rendered.

The bill adopted on June 2 also means that judges appointed in the Yanukovych era will only undergo an assessment of their qualifications, rather than competing with other professionals for indefinite tenure.

RPR also noted that there is no provision to ensure new blood in the courts of appeal. If vacancies arise, they can simply be filled by judges with five years’ experience. This experience could include banning peaceful protests under Yanukovych. Not one judge who banned protests during the Euromaidan has faced charges, and the bill will not prevent this scenario from happening again.

Mechanisms for fighting corruption are of enormous relevance to Ukraine during this transitional period. RPR noted that the bill does envisage the creation of a High Anti-Corruption Court but defers this indefinitely, and does not set out any guarantees to ensure its independence. Ironically, the deferment may not be a bad thing. Prominent human rights lawyer Arkady Bushchenko points out that such a judicial body is an extraordinary court, which is banned by the Constitution.

One of Yanukovych’s first steps in 2010 was passing so-called judicial reform, which significantly reduced judicial independence. The bill will not change this reality.

Indeed, Bushchenko warned all MPs who had voted for the amendments to not come to him for legal assistance when a future government begins political persecution. They have brought this upon themselves through the provisions on both defense lawyers and the courts, he wrote.

The Human Rights Agenda Platform, an informal coalition of human rights groups that includes the Kharkiv Human Rights Group, the Ukrainian Helsinki Human Rights Union, and others, had also highlighted crucial failings of the amendments. It had called for greater care and attention to the mechanisms needed to ensure an independent judiciary.

The constitutional amendments, the coalition stressed, contain an unacceptable number of blanket norms which in practice will allow parliament and the Cabinet of Ministers to decide what a given constitutional norm means. Assuming that the laws now needed to implement the provisions will be interpreted in a way that ensures a free, independent judiciary is dangerous. What if they are not?

The main aim of the Constitution is to protect the Ukrainian people from the arbitrary will of the government, and this is not achieved by the amendments.

The coalition identified specific concerns, such as the clause in the transitional provisions enabling Ukraine to further defer its ratification of the Rome Statute. This means joining the International Criminal Court, which is vital since Ukrainian legislation does not have mechanisms for investigating crimes committed by Russian-backed militants in eastern Ukraine.

There are unreasonable barriers posed in 151-1 of the bill on the lodging of constitutional submissions to the Constitutional Court that prevent ordinary citizens from defending themselves against dictatorial laws. Access to justice is also restricted; only official defense lawyers may represent people in court.

Judicial immunity is a fraught issue given the wholesale degradation of the judicial system under the previous regime and the many judges responsible for unjust rulings and the miscarriage of justice. There must certainly be accountability; however, the coalition is convinced that the High Council of Justice, which became a powerful and highly politicized body under Yanukovych, should not have the authority to bring disciplinary proceedings against judges.

It is vital that the Constitution enshrine total independence of the judiciary from the other branches of government. It is equally dangerous, the human rights activists stressed, where pressure from the courts comes from the street.

It is frustrating when politicians use the undeniable need for judicial reform to push through amendments that fossilize real problems and impede much-needed reforms.