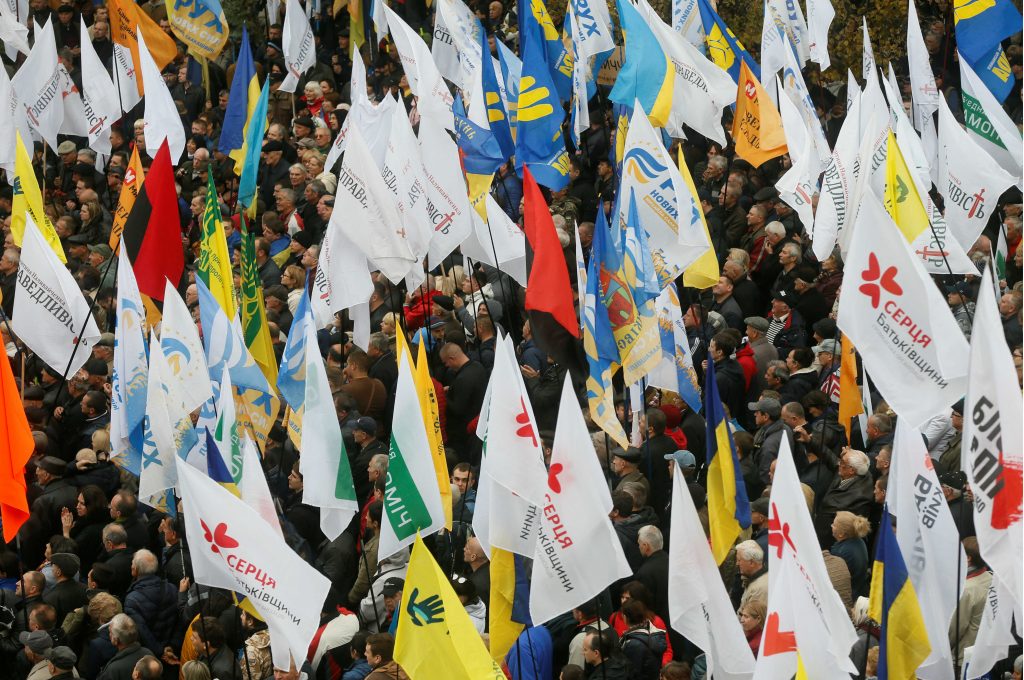 Ukraine’s political parties are in trouble. Public support for national parties is at its lowest since the 2013-2014 Revolution of Dignity. According to a recent poll by the International Republican Institute (IRI), 22 percent of Ukrainians said they would not vote in the 2019 parliamentary elections and 30 percent could not answer the question.

Ukraine’s political parties are struggling to secure double-digit support. With presidential and parliamentary elections scheduled for May and October 2019, it is anyone’s game at this point—and much work remains to build party structures and craft messages that resonate with voters prior to Election Day.

But there is a silver lining to the bleak picture: nearly 40 percent of likely voters want to participate but do not have a current party preference. This means that the political climate should be seen as a big opportunity for party growth, and IRI’s data suggests at least two strategies that can be utilized to increase a party’s support over the next year.

Figure 1: Support for Ukrainian political parties is at its weakest level since the 2013-2014 Revolution of Dignity, with most parties struggling to gain double-digit public support.

Figure 2: Looking ahead to the 2019 elections, 30 percent of Ukraine’s electorate are currently undecided, and another 22 percent claim they would not vote.

Figure 3: Nearly 40 percent of likely voters want to participate but do not have a current party preference.

Public support for local-level reformers and their regional party branches far outstrips support for national leaders and parties. Political parties in Ukraine have been historically personality-based, with parties’ messages, popularity, and longevity relying chiefly on the popularity of a single national leader. Because national figures enjoy so little trust, political parties do, too. Ukrainians want to see their government implement promised reforms, tackle corruption, and govern effectively—and it is at the local level that the most discernable progress is being seen by voters.

Despite the relative optimism about the pace of change in cities, national parties are not being credited with these successes. Local mayors are visible in their communities, cutting ribbons for new schools, but are rarely accompanied by members of parliament or surrounded by party banners. Many local officials do not even wear a party button on their lapel. Now that communities have greater control over financial resources, voters across Ukraine can see road repair equipment on their streets and new bridges being built, as city councils across Ukraine spend down the largest budgets in their control since independence.

At the national level, parties are suffering from a lack of direct connection to their local branches and have not effectively conveyed how legislative successes have led to greater local-level satisfaction. For this reason, parties should consider showcasing the successes of their local “rising stars” in their communications strategies, in order to demonstrate that they are able to enact meaningful changes and govern responsively.

2. Focus on Building a National Presence

While the temptation exists for many party leaders to campaign through social media or stick close to their base of support, Ukraine needs truly national parties. When parties retreat into more centralized control from Kyiv or their regional centers, they risk leaving the small but highly motivated young party branches across the country to wither on the vine. With 40 percent of likely voters undecided, there is real opportunity for political parties to broaden their base and attract new voters.

In southern and eastern Ukraine, for example, we have seen a significant increase in political pluralism for the first time since 1991. Although the Opposition Bloc (formerly known as the Party of Regions) is still the most popular party in southeastern Ukraine, growing frustration with the status quo will undoubtedly benefit alternative parties.

We began to see such a development in the October 2015 local elections, in which parties like Nash Krai, the Agrarian Party of Ukraine, and Syla Liuday performed unexpectedly well in a region long-dominated by the Party of Regions. Syla Liuday secured five seats on the Mariupol city council, indicating that local residents are willing to support young activists and politicians if they are perceived to be genuinely dedicated to serving the interests of the local community. The Agrarian Party of Ukraine surprised many by winning more than 10 percent of municipal council seats in several regions, after a campaign that relied exclusively on local activists and small business owners, while the pro-Western opposition party Nash Krai secured seats on numerous city councils and in mayoral races in the region.

This presents an important opportunity for parties to identify and develop new candidates, test messages, and attract new supporters ahead of the 2019 elections.