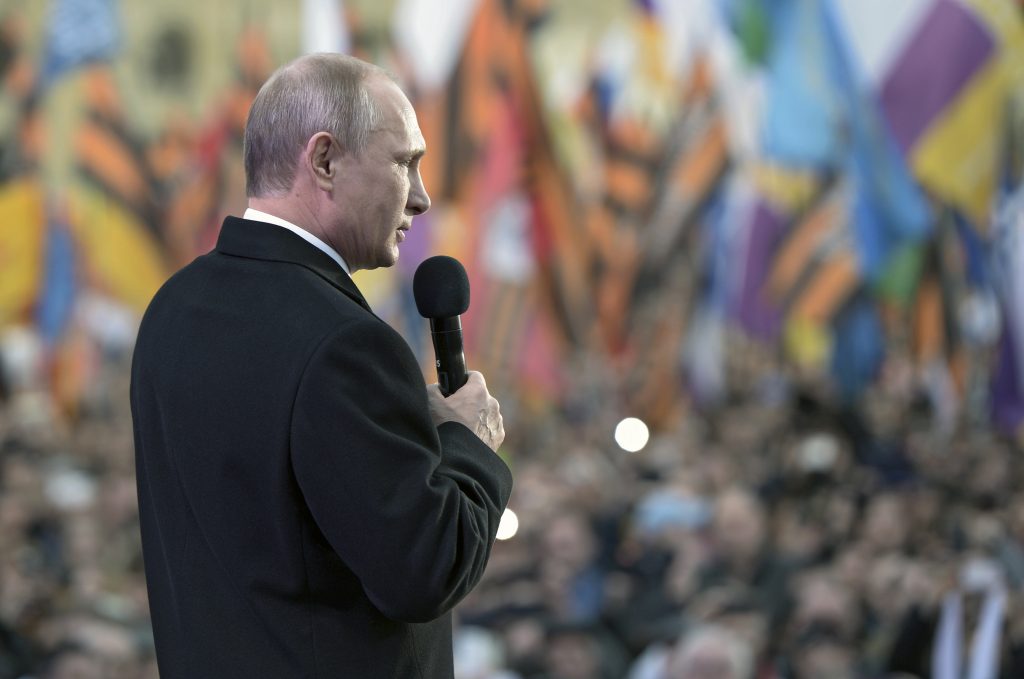 Europeans do not want to undermine Minsk II, says analyst

European Union leaders meeting in Brussels on March 19 are unlikely to either ramp up or lift sanctions on Russia over its actions in Ukraine, says Edward W. Walker, a professor of political science at the University of California at Berkeley.

“It’s very likely that the EU will decide on the 19th to kick the can down the road,” Walker said in an interview with the New Atlanticist.

“It does not want to undermine whatever chance the Minsk II agreement has of being implemented,” he added, referring to the ceasefire agreement between Ukraine and pro-Russian rebels.

The European Union is hesitant to split from the United States on sanctions, said Walker. “A split on sanctions could be extremely divisive. Moreover, the EU, Germany in particular, is very aware that the Obama administration is under growing domestic pressure to increase military assistance to Ukraine, and they have to worry that if they break with Washington over sanctions, the United States will break with European doves on arming Ukraine and otherwise ramping up its military response to Russia’s actions in Ukraine,” he said.

Walker shared his comments in an e-mail interview with the New Atlanticist’s Ashish Kumar Sen. Excerpts below:

Q: What are your expectations from the EU summit on March 19? Will the EU extend sanctions on Russia, or are the majority of member states inclined to give Russia more time to de-escalate the conflict in Ukraine?

Walker: It’s very likely that the EU will decide on the 19th to kick the can down the road and neither increase sanctions or agree to lift any or all of them. The EU is involved in an extremely difficult and complex political game over sanctions, particularly because the sanctions in place now have term limits and renewal requires unanimous approval by all member states. It does not want to undermine whatever chance the Minsk II agreement has of being implemented; members such as Hungary and especially Greece want to use their veto rights over sanctions as leverage on other matters, including of course for Greece over austerity and debt; and other members, notably the Baltic States, Poland, and the United Kingdom, want to maintain maximum pressure on Moscow.

There is another very important dimension to the sanctions question for the EU, which is its relationship with the United States. Most member states do not want to see the Ukraine crisis lead to a division within the Atlantic alliance, and they therefore have to worry about what would happen if the EU went in one direction and the United States another on sanctions. A split on sanctions could be extremely divisive. Moreover, the EU, Germany in particular, is very aware that the Obama administration is under growing domestic pressure to increase military assistance to Ukraine, and they have to worry that if they break with Washington over sanctions, the United States will break with European doves on arming Ukraine and otherwise ramping up its military response to Russia’s actions in Ukraine. That, too, might provoke a crisis in European relations with the United States, where there is already growing resentment in policy circles that Europe spends so much less on defense than the United States, and where most NATO members spend less than NATO’s two percent of GDP target.

A major split between Europe and the United States is of course exactly what the Kremlin is hoping for.

At any rate, my guess is that the EU is not going to make any important decision on sanctions at this summit. I also suspect that it will ultimately decide to extend those that expire this summer until the end of the year, the line being that the EU needs to give Minsk II the time it needs for implementation.

One important point though: the EU position is that sanctions may be lifted if Minsk II is implemented in full. At some point that line is going to cause problems for Europe, because in my view there is no way Minsk II is going to be implemented in full. The separatists, having won on the battlefield, are never going to allow Kyiv any real sovereignty over the territory they control, any more that Transnistria, North Ossetia, Abkhazia, and Nagorno-Karabakh have ceded any sovereignty to Moldova, Georgia, or Azerbaijan. The impracticality of the political (as opposed to the ceasefire and separation of forces) provisions in Minsk II was highlighted in the past couple of days by the terms of Kyiv’s revised law on special status for the breakaway region, and then by the refusal of the separatists to accept the validity of that law on their territory or willingness to organize new elections that comply with Ukrainian law.

Q: Besides Western sanctions, a steep drop in the price of oil has hurt Russia. Putin has been forced to announce that he will take a pay cut. How much pain can Russia’s economy endure?

Walker: To me the key question is how long and how deep the Russian recession will be, and how long and how bad does it have to get before Putin’s ratings start to go down and the regime starts to come under domestic pressure. As of now, most forecasts have the Russian economy shrinking between three and five percent this year and then maybe starting to grow again, albeit slowly, next year. But much depends on oil prices and on Russia’s ability to refinance its dollar-dominated debt over the coming months and years, which in part depends on whether Western financial and sectoral sanctions are renewed.

The news in recent weeks on oil prices has not been good for Russia, as it appears that lower crude prices are having less effect on US shale production than many had expected, and there is a chance that an agreement with Iran might lead to a new surge in supply.

Another important factor is what happens when the Fed starts to increase interest rates in the United States. The Fed signaled on March 18 that it may do so as early as this summer, which may lead to more hot money flowing into the United States in search of yield, a continuing rise in the dollar, and greater difficulties for emerging market economies, including possibly Russia, servicing their dollar-dominated debt. Falling oil prices and a rising dollar could produce a very serious financial crisis for Russia at some point, perhaps as early as the end of this year.

I should note, though, that financial markets have not been signaling particular concerns about this recently. The still very undervalued Russian stock market has been on a role, even in dollar terms, and the ruble is no longer tracking oil prices as closely, having stabilized in recent months at around sixty to the dollar. So that has to be encouraging for the Kremlin.

Q: What impact are Russia’s economic problems having on its neighbors, particularly on those countries with which Russia has economic ties?

Walker: I have a recent blog post on this topic, but the short version is that all of Russia’s neighbors, to my knowledge without exception, are being hurt by Russia’s economic weakness, and especially by the fall of the ruble, to one degree or another. I also think almost all of Russia’s neighboring governments are worried about the domestic fallout from economic difficulties, and about the geopolitical and security fallout as well. I think that is true whether we are talking about comparatively rich energy producing countries like Kazakhstan and Uzbekistan, which are being hammered by low oil prices and hurt by the fall of their currencies against the dollar, or comparatively poor countries like Kyrgyzstan, Tajikistan, and Armenia, which depend on remittances from migrant workers in Russia.

Q: In what ways have recent developments in Russia—the assassination of Boris Nemtsov and Vladimir Putin’s mysterious disappearance—complicated the relationship between Russia and the West?

Walker: I frankly don’t think they have had, or will have, much impact, unless of course it turns out that Putin is seriously ill and has to step down or dies in office (which I suspect is very unlikely). Relations with the West have been on a steady downward trajectory since the late 1990s, despite some ups and downs, and they really went off the rail after Putin’s re-election in 2012 and then with the Ukraine crisis. I don’t think the murder of Nemtsov or Putin’s recent (temporary) disappearance from public view changes very much. I suppose I should add that Nemtsov’s murder does not bode well for the prospects of liberalization in Russia, to put it mildly. But that is a domestic matter, not a foreign policy one.

Q: Are we headed toward a frozen conflict in Ukraine?

Walker: I have long argued that we would be very lucky to get a stable frozen conflict in eastern Ukraine, and that the alternatives are an unstable frozen conflict with sporadic fighting and no real separation of forces, or another major escalation of violence, including the possibility of the open introduction of Russian troops into the conflict. I don’t think the Kremlin believes that a stable frozen conflict is in its interest (it would end up, in practice, having to pay for restoring some measure of economic and political order in the Donbas, and Kyiv would be free to move closer to the West and eventually improve its ability to defend itself). Moreover, neither Kyiv nor the West is willing to accept publicly that they would settle for a stable frozen conflict. So I think the most likely outcome is an unstable one, although it is also very possible that we will see the ceasefire breakdown completely.

Image: The key question is "how long and how deep the Russian recession will be, and how long and how bad does it have to get before [Russian President Vladimir] Putin’s ratings start to go down and the regime starts to come under domestic pressure," Edward W. Walker, a professor of political science at the University of California at Berkeley, tells the New Atlanticist. (REUTERS/Alexei Nikolsky/RIA Novosti/Kremlin)