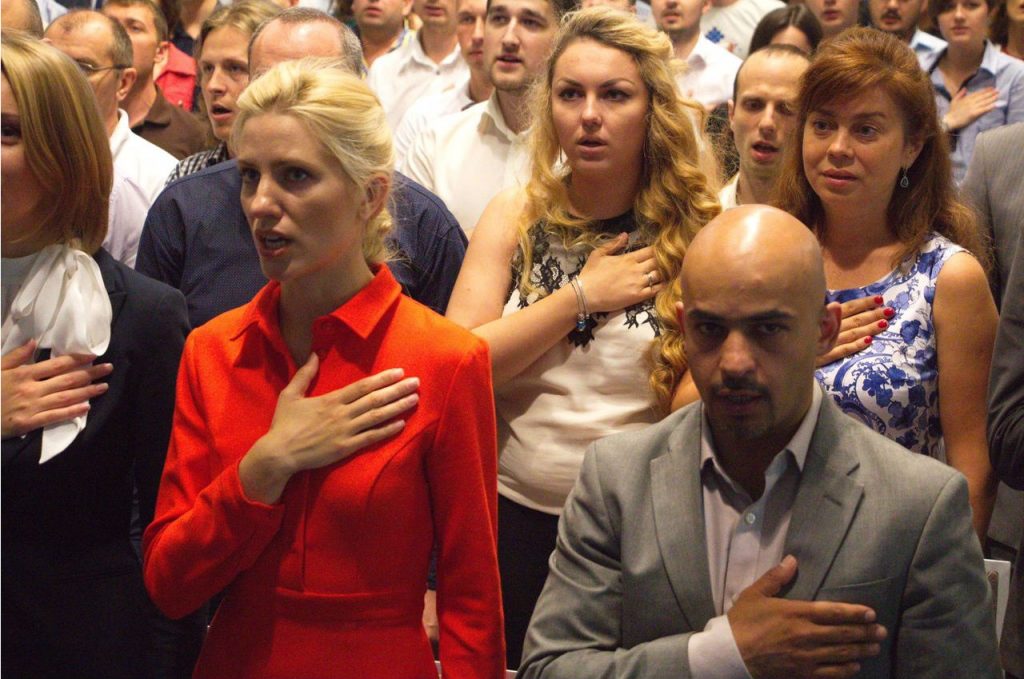 As Europe lurches in the direction of populism, xenophobic anti-immigrant attitudes, and anti-EU posturing, Ukraine appears to be tilting the other way. Located largely outside European discourse for the last twenty-five years, Ukraine is now odd man out, with pro-EU sentiments running high, xenophobic attitudes largely absent, and not one but two initiatives under way to create new liberal political parties.

On July 9, Ukraine witnessed the emergence of a serious push to form a European liberal political party.

The new initiative is being led by Mustafa Nayem, a former journalist and now legislator, whose Facebook and Twitter postings helped trigger the Maidan Revolution of 2013-2014; Sergii Leshchenko, an investigative journalist who has exposed some of Ukraine’s largest corruption schemes; Svitlana Zalischuk, a former civic activist turned politician; and Deputy Minister of the Environment, Svitlana Kolomiyets. Vasyl Gatsko is the leader of an activist political party, the Democratic Alliance, which will become the platform for the new liberals. Gatsko and Zalischuk were elected as the party’s co-chairs on July 9 in Kyiv.

All of the new party’s leaders are in their twenties and thirties. And all are committed to the creation of a political party that unites the center and the center-right and backs free market approaches, is steadfastly libertarian on matters of personal choice, and is a staunch proponent of tough anticorruption measures.

Liberal values are in decline in Central and Western Europe, but they are a relatively new political option in Ukraine, which despite two mass protest movements has never seen a serious European liberal political project congeal since communism fell in 1991.

There are many reasons for this. Ukraine has lacked serious ideologically based-political parties. Post-communist Ukraine was riven by a deep cultural-political divide that pitted a Russo-centric identity in the east and south against a western-oriented narrative rooted in the Ukrainian language and culture that dominated in the west and center. This meant that political parties focused primarily on cultural politics, often laced with populist economic appeals, rather than offering measured and sober values-based programs.

Russian President Vladimir Putin’s recent aggression in Crimea and the Donbas has largely consolidated the Ukrainian nation, bringing together Russian- and Ukrainian-speakers around a new spirit of patriotism and national pride. This has meant that politics is no longer operating on an east-west or Ukrainian-Russian-speaking axis, but around fundamental political principles, thus opening the door to more programmatically oriented political discourse.

Moreover, oligarchic clans have dominated Ukraine’s politics. These vast business interests financed and gave media access to political parties, which in turn lobbied for their interests. The Maidan Revolution broke this monopoly on political discourse and saw the emergence of a wide array of new voices from civil society. These resourceful and mobile voices rely on social media, internet-based news, civic networks, and crowd funding to spread their message and build support.

Furthermore, the participation of key liberals in two post-Maidan governments has given new visibility and celebrity to these voices, many of them affiliated with the new liberal party.

In addition, wealth creation in Ukraine—once largely accomplished through the privatization of state enterprises and natural resources and through corrupt arbitrage in the sale of energy—is being replaced by new income sources, including high-tech and a wide array of service based enterprises.

It is precisely this entrepreneurial sector dominated by small and medium enterprises that has the least protection from the predations of corporate raiders and corrupt local officials. It is this sector of the business community that craves a strong rule of law and a professional, impartial judiciary. And it is this sector that employs some 70 percent of all Ukrainians.

In addition, the new liberal project appears to be gaining support from Ukraine’s small but well resourced community of investment bankers, some of whom have taken turns running Ukraine’s financial and economic ministries.

But there is an emerging storm cloud on the horizon for the new liberal party. Acolytes of the charismatic and controversial former Georgian President Mikheil Saakashvili, a Ukrainian citizen since May 2015, are preparing to launch a similar initiative in the autumn.

The fact that these two groups that are vying for the same electorate have failed to find common ground is based less on ideology and more on values and transparency.

Nayem, one of the new party’s founders, speaks publicly with optimism of the possibility the two groups will work together or even merge, but some leaders of the newly reconfigured Democratic Alliance admit privately they are concerned about the sources of financing behind Saakashvili and some of his closest allies. They point to a well-funded office that his allies have opened in Kyiv and to the lavish lifestyle displayed by some in Saakashvili’s circle.

A few months ago, Saakashvili and the civic activists and parliamentarians around the Democratic Alliance were part of a unified anticorruption campaign that crisscrossed the country in a set of large mass meetings. These meetings that drew crowds in the thousands revealed strong demand for a liberal anticorruption project. But months of discussion exposed strong differences between proponents of a transparently funded and collectively governed political movement and Saakashvili’s more personalistic style.

The leaders of the Democratic Alliance also understand they would be burdened by Saakashvili’s record as president of Georgia, in particular by his attacks on independent and opposition media, his government’s use of extra-legal methods, and his violent suppression of protests.

For all these reasons, they have chosen to go it alone for now.

The next few months will show whether the Democratic Alliance party can gain momentum and raise the necessary resources to reach the public despite eschewing an alliance with a charismatic leader and sticking to the principle of transparent fundraising rooted in small donations.

Whether or not this new initiative succeeds—and internal polling indicates it has a chance—the Democratic Alliance has already partly achieved its goal: to give Ukrainians the option of a tolerant, financially transparent, and liberal voice at a time when populism, demagoguery, and intolerance are on the rise in Europe.

Adrian Karatnycky is a Senior Fellow with the Atlantic Council’s Eurasia Center and a UkraineAlert contributor.

Image: Svitlana Zalischuk (left), a former civic activist turned politician, is the co-chair of the new Democratic Alliance, a center-right party formed in Kyiv on July 9. Mustafa Nayem (right), a former journalist and now legislator, whose Facebook and Twitter postings helped trigger the Maidan Revolution of 2013-2014, is a founder of the party. Credit: Svitlana Zalischuk Facebook Page