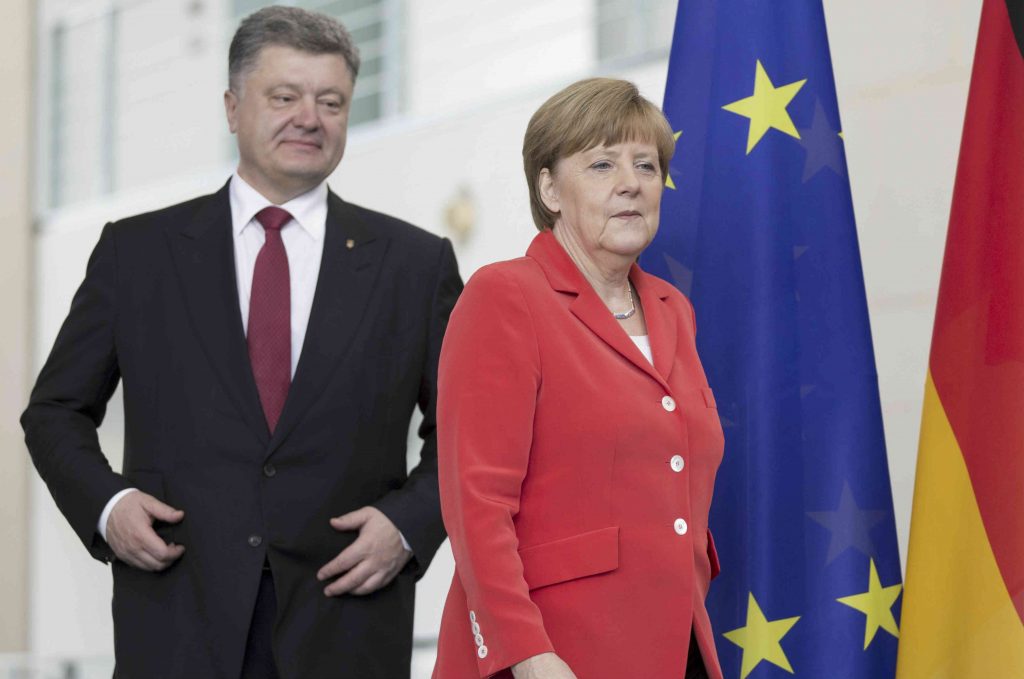 German Chancellor Angela Merkel (R) and Ukraine's President Petro Poroshenko, arrive for a joint press conference after a meeting at the Chancellery in Berlin on May 13, 2015. REUTERS/Axel Schmidt

Ukraine bleeds, but reforms impressively, while the West ignores it. The Minsk ceasefire agreement does not hold, though the intensity of the fighting has faded. In mid-March, the International Monetary Fund (IMF) doubled Ukraine’s international reserves, but the country’s finances remain fragile. Europe’s central banks should provide a large swap credit with minimum risks to shore up Ukraine’s economy.

On March 2, the Ukrainian parliament adopted eight important reform laws, involving changes in the budget, taxation, pensions, and most importantly energy pricing. As a consequence, the IMF Executive Board approved a four-year program that laid the basis for the current relative economic stabilization in Ukraine.

The Ukrainian government has implemented these reforms with vigor as never before. On April 1, it quadrupled gas prices for households and hiked all energy prices to half the actual cost. Prices had been subsidized for years. Nobody protested because Ukrainians understood the increases were necessary to strengthen public finances and fight corruption. The parliament has adopted a law opening up the Ukrainian gas market in line with the new competition rules. The government has abolished plenty of red tape and harmful state inspection agencies.

At long last, Ukrainian enterprises have been forced to reveal their ultimate owners. The government is imposing order on state-owned companies, and taking back financial control from parasitical businessmen. The parliament has enacted a package of anti-corruption laws. Ukraine is implementing more reforms than ever, but good news receives little publicity.

Still the overall situation remains brittle. The main threat is Russia’s military aggression. The Kremlin’s prime aim is to preempt a democratic breakthrough in Russia, therefore it wants Ukraine’s democratic regime to fail. Since Ukraine has defended itself successfully for more than a year, Russia’s military strength does not appear overwhelming, but Russia is also pursuing subversion through a trade and a gas war that has devastated the Ukrainian economy.

Incomprehensively, the West refuses to deliver defensive arms to this democratic and pro-European nation. Instead, the argument runs, the West should help Ukraine economically, but it is not doing that either. Ukraine would need $40 billion to 50 billion in credits in 2015-16 to stabilize its economy. The IMF is offering major support with $17.5 billion, but all other committed international funding amounts to no more than $8 billion. The IMF and the Ukrainian government insist on a voluntary restructuring of Ukraine’s eurobonds, supposed to ease the payments burden by $15.3 billion in the next four years, but it is not a done deal.

Meanwhile, Ukraine’s economic decline is becoming desperate. Ukraine’s GDP fell by 15 percent in each of the two last quarters. The question is how much suffering Ukrainians can bear?

In this time of obvious need, one would expect the European Union to support a democratic European nation that borders four EU countries, but the EU seems oblivious. Since the Ukrainian parliament ousted President Viktor Yanukovych in February 2014, the EU has only committed €5 billion ($5.56 billion) to Ukraine, while it has committed €200 billion ($222.3 billion) to Greece—or forty times more to a country that is only a quarter as populous. Ukraine carries out radical reforms, whereas the Greek government opposes them. Of course, Greece is a member of the EU and the eurozone, but still. Ukrainians have been dying for Europe and even draped in European flags. Is the EU lacking all strategy?

A common European argument is that Ukraine has to reform first, but Ukraine is doing so. The time for the EU to act is now, not after Ukraine has failed because of a lack of resources.

The EU can help effectively with minimal risks. Ukraine’s most urgent need is to raise more currency reserves. On April 30, the reserves amounted to only $9.6 billion, which is 1.7 months of imports. The European central banks can provide the necessary funds through a swap credit that can function as a stabilization fund; swap lines salvaged Poland’s financial stabilization in 1990. The presence of the swap line will calm the currency market and restore overall confidence. On the other hand, the swap line may not be used because the creditors may impose policy changes if the other reserves fall below a certain level.

After the Lehman Brothers bankruptcy, the US Federal Reserve quickly provided hundreds of billions of swap lines to European central banks to salvage them from the liquidity freeze. Now, they should do something similar on a much smaller scale to secure Ukraine’s financial stability. The need is as great as the risk is small.

Anders Åslund, author of “Ukraine: What Went Wrong and How to Fix It,” is a Senior Fellow at the Atlantic Council.