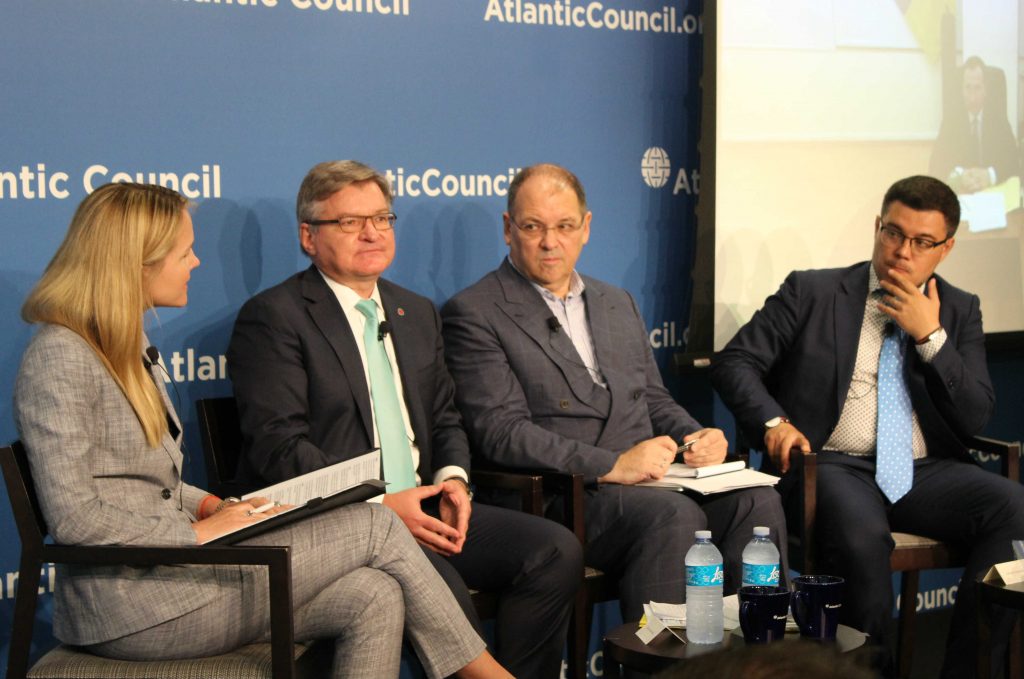 From left: Alexa Chopivsky, executive director of the American Center for a European Ukraine, moderated a discussion on the current state of Ukraine’s humanitarian crisis with Dr. Hryhoriy Nemyria, chair of the Verkhovna Rada’s Human Rights Committee, Adrian Karatnycky, a nonresident senior fellow at the Atlantic Council, Taras Berezovets, director of Berta Communications, and His Excellency Ihor Raynin (via video link), governor of Kharkiv Oblast, Ukraine, in Washington on June 21.

“People have forgotten that there’s a real humanitarian situation and a real need in a European country,” said Jock Mendoza-Wilson, director of international and investor relations at System Capital Management, during a recent Atlantic Council panel examining the crisis in Ukraine.

In fact, he said, six hundred thousand people on Ukraine’s contact line live in “appalling conditions” without electricity and gas, have intermittent water, face shelling and small arms fire on a daily basis, and don’t have access to a food market. “They are in extreme need,” he said. “From the distance of Washington, DC, it may look like there’s not an active conflict…but it’s real and immediate.”

On June 21, seven experts gathered at the Atlantic Council to discuss the current state of Ukraine’s humanitarian crisis and its unmet needs.

Since 2014, the war in Ukraine’s east has claimed over ten thousand lives and displaced over 1.8 million people—the largest internally displaced persons crisis in Europe. According to data from the International Organization for Migration, 3.7 million people have been affected, 3.5 million need assistance, and 2.7 million live in areas that aren’t controlled by the Ukrainian government.

Nadia McConnell, president of the US-Ukraine Foundation, pointed out that a little over two years after the fighting broke out in eastern Ukraine, “it still remains an invisible emergency.” Less than 20 percent of the $298 million that the United Nations requested from international donors has been provided, she said.

System Capital Management’s charitable arm, the Rinat Akhmetov Humanitarian Center, has delivered 8.4 million food packages in the last two years. Eighty-four percent of its recipients are pensioners; the rest are mothers with children. “People [along the contact line and in rural areas] have nothing else. If that food package doesn’t come in, they don’t eat,” Mendoza-Wilson said.

Not just one crisis zone

“To think of the crisis as one area is a misnomer. There are four zones, each with their own needs,” Mendoza-Wilson said.

But the crisis isn’t confined to eastern Ukraine, Taras Berezovets, director of Berta Communications in Kyiv, pointed out. According to Berezovets, since Russia annexed Ukraine’s Crimean peninsula in March 2014, fifty thousand Crimeans have fled to mainland Ukraine. The first wave left for political and religious reasons; successive waves left for economic reasons.

Only 20 percent of businessmen who operated in Crimea before annexation remain there today, Berezovets said. Free speech is under assault and independent media has been eliminated, except for Radio Free Europe/Radio’s Liberty’s AM service. There is enormous pressure on Protestant churches and Crimean Tatars.

Ukraine has 1.8 million officially registered IDPs out of a population of 43 million. To understand the enormity of that figure, one should remember that Germany, whose population is double that of Ukraine, accepted one million refugees last year, said Dr. Hryhoriy Nemyria, chair of Ukraine’s parliamentary Human Rights Committee. Almost 30 percent of IDPs are children and 59 percent are pensioners.

Ukraine is dealing with a phenomenon of protracted displacement, and long-term planning horizons are vital, Nemyria urged. He said Kyiv should view the crisis not as a burden but as part of a development paradigm and an opportunity.

The government’s response to the crisis has been “largely inadequate,” according to Aleksandr Galkin, director of the Ukrainian NGO Right to Protection. The government doesn’t have the resources or the political will.

“There is no national strategy in Ukraine as far as IDPs are concerned,” Nemyria agreed. “Yes there are policies…but they look like improvisations.”

The Ukrainian government provides social assistance and pensions to IDPs, but those payments were suspended earlier this year due to “inconsistencies in legislation,” leaving 350,000 IDPs without pensions and 15,000 without social payments.

Calling it “the most outstanding issue,” Nemyria noted that access to pensions has a severe impact on the survival of old people.

A recent Right to Protection report on the suspension of social assistance and pensions found that a majority of IDPs interviewed were not informed in advance about the suspension of their assistance or the grounds for suspension. The report also found that many IDPs must travel long distances to local government offices to have their payments reinstated and wait in line for hours to sort out their benefits.

There are other outstanding issues. IDPs haven’t been able to vote in the last three elections. Discrimination is also commonplace; many job advertisements state that people from the Donbas won’t be considered, Galkin said.

In April, the government set up a ministry dedicated to IDPs but it only has four employees, including the minister, and no budget.

But the picture isn’t hopeless, Nemyria said. There’s a new generation of first-rate NGOs that deliver relief and legal assistance in the Donbas, he said. He singled out Right to Protection, Donbas SOS, Euromaidan SOS, and the Center for Civil Liberties. Pointing to a poll from the Kyiv International Institute of Sociology, Ukrainians trust the church, the army, and those NGOs helping IDPs the most.

Another poll shows that only 2 percent of Ukrainians are unhappy with IDPs, said Adrian Karatnycky, a nonresident senior fellow with the Atlantic Council’s Eurasia Center. “Attitudes are extremely healthy,” he said. “The Ukrainian public passes with flying colors. Not so with the elites.”

McConnell blamed part of the “pathetic” international response on the media.

The US-Ukraine Foundation analyzed the coverage of major US newspapers and found that the crises in Iraq and Syria massively outstripped coverage of Ukraine’s crisis. For example, The New York Times published 227 stories on Syria’s crisis in the past twelve months, 127 on Iraq’s, and only twenty-four on Ukraine’s.

And when it does cover the crisis, it does so inadequately, she said. The Washington Post recently published a story on IDPs with photos showing a couple in a kitchen with food, not in a refugee camp; it didn’t mention the war, Russian soldiers, or weapons. “We all will remember the picture of the soldier carrying the drowned baby from Syria,” she said. There’s no indelible image that represents the crisis for Ukraine.

Mendoza-Wilson agreed. “The picture gets the dollars,” he said. “There is no picture or not enough pictures that show the suffering that takes place in eastern Ukraine.” Resources are stretched, and Ukraine is not seen as an urgent need. Europe is also distracted by Syria and the refugee crisis, he said, adding that there’s an expectation that Ukraine can manage its problems. “Ukraine is not a poor nation. It’s a middle income nation… and that has a significant impact on how the international community responds.”

But that may change.

The gathered experts agreed that if the situation continues, people will leave, and this may mean another refugee crisis in Europe.

McConnell challenged the international community to up its game. She wants it to continue to push Ukrainian leadership to reform while supporting the country with meaningful assistance. “Ukraine is fixable,” she said. “It’s not a situation where we have to be engaged for decades.”

Rep. Marcy Kaptur (D-OH), who delivered keynote remarks at the event, called Ukraine “the test of our time,” and urged President Barack Obama to speak about Ukraine outside of the United Nations.