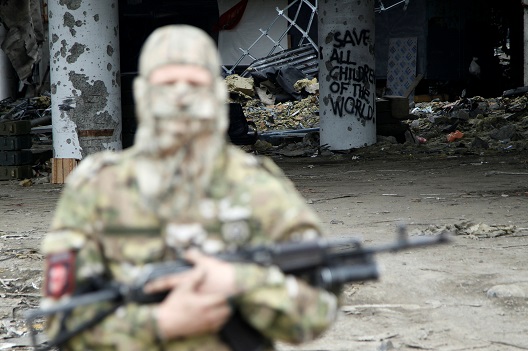 Despite the existence of a ceasefire agreement, fighting in eastern Ukraine continues and is increasing. On July 5, three Ukrainian servicemen were killed and thirteen were wounded. The uptick in fighting began this past January, when Ukrainian officials reported up to seventy-one attacks a day and the OSCE’s Special Monitoring Mission noted the return of both Grad multiple-launch rocket systems and 152 mm artillery to the battlefield. Ukrainian military spokesman Oleksandr Motuzyanyk reported that every third enemy attack came from a heavy weapon or mortar banned by the ceasefire agreement.

Most of the renewed fighting took place around the government-controlled town of Avdiivka. Located about ten miles from the rebel stronghold of Donetsk, the town sits on two major roads, and this location gives it an outsized strategic significance. According to Alexander Hug, deputy chief of the OSCE’s Special Monitoring Mission, the reason there was so much fighting in Avdiivka was that the two sides were physically close to each other, sometimes within fifty meters of one another’s positions. He said there were eighty-eight tanks visible on the rebel side of the ceasefire line. “They just sit there, armed and battle-ready, within easy reach of the contact line,” he said.

The head of the OSCE mission, Ertugrul Apakan, reported that in April, the OSCE saw the highest number of ceasefire violations in months. He said that the artillery and mortars proscribed by the Minsk accords were being used in increased numbers. Many of the permanent storage facilities for these banned weapons were empty and completely abandoned.

According to Hug, both sides were violating the provisions of the Minsk accord. He noted that heavy weapons remained in the conflict zone, the two sides still held prisoners, Kyiv had not granted amnesty to separatists or amended the constitution to allow more autonomy in the east, the OSCE still was unable to visit all parts of the separatist regions, and Russia had not returned control of the border to the Ukrainian government.

Russian President Vladimir Putin’s adviser Vladislav Surkov visited Donetsk in late April, and exhorted the rebels to better perform two jobs: chasing government forces away from the town of Avdiivka, and distributing Russian military and financial aid. According to Ukrainian intelligence, Surkov’s visit corresponded with the reported arrival of Russia’s 10th Special Forces brigade in the area south of Donetsk, the return of twenty-four repaired tanks to Luhansk, and the delivery of 320 tons of ammunition and one thousand tons of diesel fuel. While Russia would not confirm that its forces were inside rebel territory, it did announce a snap combat readiness exercise on the border.

Another truce, designed to mark the May 1 arrival of Orthodox Easter, collapsed within days. Separatists are using the Avdiivka water filtration plant as a firing platform, betting that Ukrainian commanders will continue to hold their fire. Kyiv forces are well aware of the danger that a misplaced round could release deadly chlorine into the atmosphere. According to Ukrainian platoon commander Vlad Yushkevich, “The separatists use the water-filtration plant as cover to launch attacks on us…We’re banned from firing back. The enemy know this and uses it to his advantage,” he said. “It’s a very tough situation right now. The Russian Federation keeps sending in new humanitarian convoys.” Ukrainian intelligence reports indicate that since January, Russia has provided rebel fighters with dozens of artillery systems, more than three hundred tanks and armored fighting vehicles, and almost seven thousand tons of ammunition.

The scale of the escalation is demonstrated by events on a single night, May 30, when the OSCE recorded 305 undetermined explosions northwest of Donetsk. US Ambassador Geoffrey R. Pyatt said on May 31 that he was “shocked by the escalation happening in eastern Ukraine in recent days.”

Russia’s continuing support of the rebels allows them to hold out against Ukraine’s superior forces. A senior US Department of Defense official told Foreign Policy in April that there were still seven thousand Russian troops inside Ukraine, advising the rebels and engaging in fighting themselves. “I think they can sustain this for a considerable period of time,” said the official. “Our view is that they could sustain this easily for twenty-four months.”

To force Russia’s withdrawal, the United States and the European Union need to increase pressure on the Kremlin. On July 1, the EU extended its sectoral sanctions on Russia until the end of January 2017, but there are signs that EU unity won’t hold much longer. “People are tired of confrontation with Russia. They don’t like the tensions and they see that Ukraine is not delivering enough on the reform front,” said Ulrich Speck of the Transatlantic Academy. Nevertheless, sanctions should not be lifted until Russia changes its behavior, leaves the Donbas, and returns Crimea.

James J. Coyle is Director of Global Education at Chapman University, and is a Nonresident Senior Fellow at the Atlantic Council.