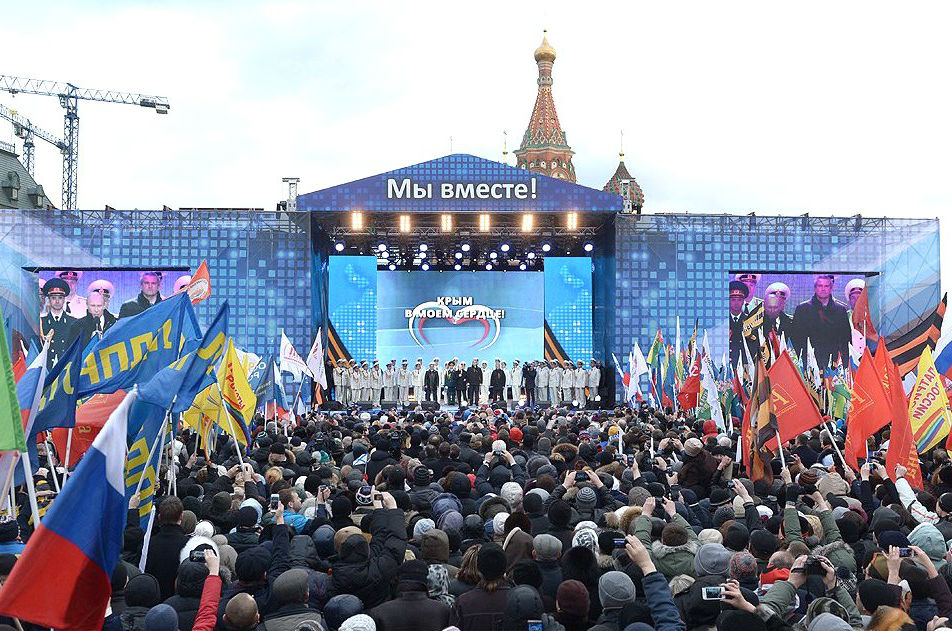 Russian President Vladimir Putin welcomes Crimea back into the Russian Federation at the “We Are Together” rally in Moscow on March 18, 2014. So far, the West has largely failed to address deeply poisoned Russian public opinion. It does not systematically counteract or attempts only insufficiently to expose the anti-Western conspiracy theories constantly spread by the skillful manipulators of Kremlin-controlled mass media. Credit: Kremlin.ru

The Russian Federation possesses—and will continue to possess for the foreseeable future—the second-largest nuclear arsenal on Earth. Like the Soviet Union before it and the United States today, this gives Moscow an overkill capacity. As did their communist predecessors, Russia’s leaders today command enough weapons of mass destruction to destroy humankind several times over.

Moreover, the country’s current rulers act within a political system that either lacks or has not sufficiently developed parliamentary control of the armed forces, checks and balances among branches of power, civil society monitoring of officials, or investigative reporting on powerful politicians. Russia’s political system represents a form of electoral authoritarianism in which power holders depend only on the integrity of their chain of command, and on public support constantly regenerated by the government’s own propaganda.

For these reasons, Russia’s increasingly neurotic collective mindset represents a critical threat to Europe’s security and beyond. Russian electronic mass media has morphed from a platform of relative pluralism in the 1990s into a dangerous instrument of agitation and manipulation. Over the last fifteen years, leading Russian TV channels, radio stations, and newspapers have been purposefully designed to prolong as long as possible the rule of the kleptocratic clique surrounding President Vladimir Putin.

The Kremlin-controlled mass media achieves this by imposing a fortress mentality among the Russian people. Citizens are told daily that Russia is under deadly attack from the United States and its underlings—ranging from far-away Australia and Canada to neighboring Estonia, Georgia, and Ukraine. The propaganda machine’s constant repetition that NATO, the European Union and its allies are after Russia’s lands and resources has convinced many Russians they must stick together to secure their nation’s physical survival.

So far, the West has largely failed to address the core issue in its confrontation with Moscow: deeply poisoned Russian public opinion. It does not systematically counteract or attempts only insufficiently to expose the anti-Western conspiracy theories constantly spread by the skillful manipulators of Kremlin-controlled mass media. For instance, since 2005, the English-language Russia Today TV channel has become a noteworthy factor, although its effectiveness has recently diminished as a result of events in Eastern Europe rather than critical Western exposure.

RT’s pseudo-pacifist stance began to lose clout with the start of Russia’s all-too-obvious “hybrid war” against Ukraine. The downing of Malaysian Airlines Flight 17 by a Russian missile over Ukrainian territory in 2014 has been particularly damaging. It dealt a lethal blow to the propaganda strategies of RT and other Russian outlets aimed at muddying the waters of Western public opinion on Russia’s military escalation in the Donbas. Indeed, the Kremlin’s project to subvert the integrity of the West from within has largely failed. Instead, the West is more united today than before Moscow’s Ukraine adventure.

Yet a far more consequential and complicated challenge remains largely unmet: the ever stronger anti-Western infection of public opinion, inside Russia, by state-directed domestic TV. Major channels like ORT, RTR, and NTV bombard ordinary Russians around the clock with half-truths, conspiracy theories, defamatory allegations, and plain lies via their news programs, historic documentaries and political talk shows. These lavishly funded and peculiarly professional “myth engines” misinform and stir up the Russian public, on a scale and with a vengeance that’s difficult to imagine for someone who doesn’t understand Russian.

As a result, the people of one of the world’s most powerful countries now suffer from collective neurosis. Existential fear, deep resentment, manifest insecurity, and profound mistrust dominates Russia’s thinking about the West and especially the United States. Most Russians today see the world as consisting mainly of intransigent enemies of Russia engaged, at best, in a zero-sum game, or, at worst, in a hidden war against their motherland. Russia’s present state of national paranoia means that humanity may have, without realizing it, entered one of the most dangerous moments in its history.

Neither better diplomacy with the Kremlin nor a boost in NATO’s military capacity will overcome this threat. Instead of engaging in ever more diplomatic activism and spending more on weapons, the West’s leaders and thinkers should ponder how and what to communicate to the Russian people living both inside and outside Russia. How can we reach them and make them believe that we are not their enemies? Where should we put our money and direct our energy to tackle not the symptoms, but the root of our problem with Moscow? Finding practical answers and workable instruments to address these issues will make the Earth a safer place for all of us.

Andreas Umland is Senior Research Fellow at the Institute for Euro-Atlantic Cooperation in Kyiv and General Editor of the book series “Soviet and Post-Soviet Politics and Society” published by Germany’s ibidem Press.