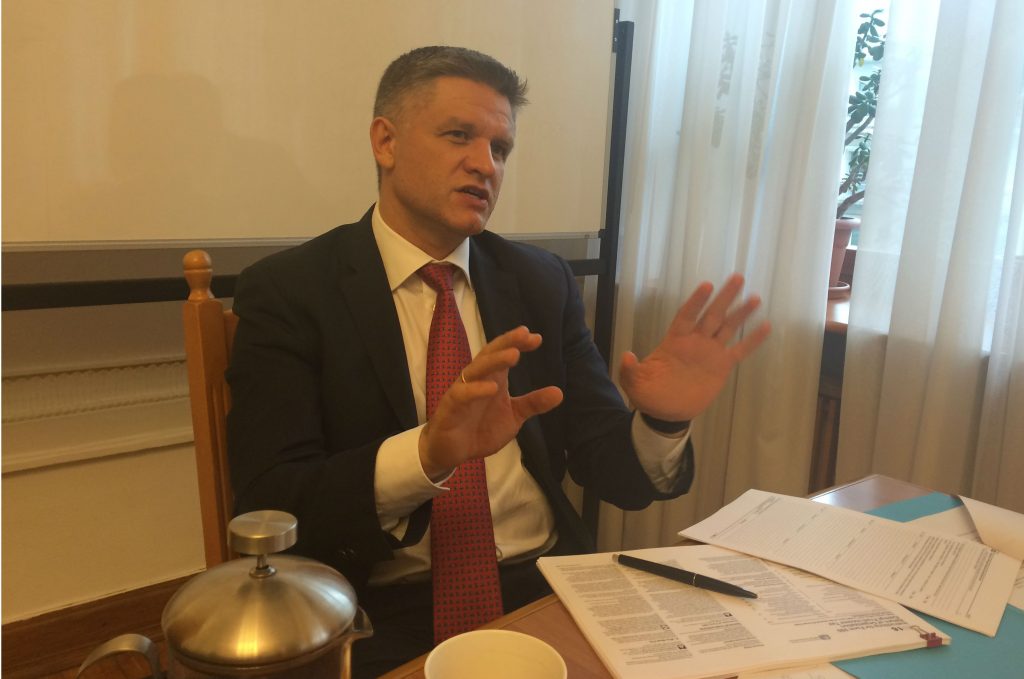 Dmytro Shymkiv, deputy head of the presidential administration and secretary of the National Reform Council, on June 2 in Kyiv. Credit: Melinda Haring

Two bills that would remove Ukraine’s controversial disclosure requirements for nongovernment organizations and replace them with more extensive reporting requirements were introduced in parliament on July 10.

In an interview, Dmytro Shymkiv said bill 6674 and 6675 would make the public aware of how tax-exempt money is being spent “as it is done everywhere else in the world” and bring Ukraine up to international standards.

On March 27, President Petro Poroshenko signed an amendment to a 2016 law requiring politicians and public officials to disclose their assets. The amendment required anticorruption activists to register their assets as well. It was far-reaching: it also made investigative journalists who regularly expose corruption, foreign board members who oversee NGOs with anticorruption programs, and even subcontractors who supply NGOs with water and other everyday items subject to the disclosure law.

The move sparked strong criticism. The US Embassy and the EU both urged Poroshenko to reject the amendments. José Ugaz, chairman of Transparency International, called the move “vindictive retaliation by lawmakers who are angry that they are required to declare their wealth,” and said there’s “no justification for singling out anticorruption groups.”

Importantly, the new bills remove a paragraph in the current e-declaration law that specifically focuses on anticorruption NGOs. Now, all NGOs are included in the new bill.

NGOs are currently required to report annual financial information to the State Fiscal Service, but the new legislation would introduce greater reporting requirements. It would require NGOs to list donors who give more than 80,000 hryvnia (approximately $3,077), list the names and salaries of the top ten earning employees, and disclose any expenses that exceed 80,000 hryvnia. In addition, some NGO employees are private entrepreneurs who receive money directly from donors and would be required to report the source of the money and how they spend it; any commercial activity is exempt from these disclosure requirements on private entrepreneurs.

At least one NGO leader is less than enthusiastic about the proposed laws.

“We didn’t see the last version of the draft, so the first problem is that the regulations about NGOs were prepared without NGOs. The second problem is private entrepreneurs who work with NGOs will be under more control,” said Yaroslav Yurchyshyn, president of Transparency International-Ukraine.

Yurchyshyn praised the president for offering a concrete proposal but said that an open, unhurried discussion is needed.

“If the state won’t communicate openly with the NGO sector in the process of upgrading this draft, it will be signal for us that his goal is not transparency but pressure. In this situation it is better to have e-declarations for anticorruption activists than all sectors under pressure,” Yurchyshyn said.

Roman Waschuk, Canada’s ambassador to Ukraine, sees the proposal differently. “First, a caveat: foreign diplomats are not Ukrainian accountants and should not aspire to give detailed financial advice. That said, overall, I think these amendments are heading in the right direction. It’s also helpful that key NGOs have had input into the latest draft,” Waschuk said. “By shifting the focus from trying to impose civil service personal declaration rules on individual anticorruption activists to upgrading transparency requirements for NGOs, a framework that is recognizable to Canadians is being created. The rules for individual employees and consultants still seem as if they need some more work,” he said.

Shymkiv compared the prospective regulations to disclosure laws in the United States. All NGOs in the United States with tax-exempt status must complete a 990 form, which includes tax information as well as salary data about the ten most highly compensated employees. US law does not require an NGO to disclose its sources of revenue, however, so the comparison is imperfect.

Shymkiv said that parliament, not the presidential administration, insisted on the initial disclosure laws for NGOs. “Parliament’s attitude was ‘You want to check us, we’ll check you,’” he said. He said the disclosure requirements “put privacy under challenge” and create class tension.

While Shymkiv blamed parliament for the overzealous NGO disclosure law, he made a case for regulating NGOs.

Shymkiv, 41, the former head of Microsoft Ukraine, drew an elaborate diagram allegedly showing that many NGOs use a tax structure that is legally dubious to avoid taxes and enrich NGO staff. He also said that eighty NGOs in Ukraine are funded by Russia. The SBU maintains a list but it can’t shut them down without cause.

In the end, he said the e-declaration system makes it hard to convince talented people to work in government. “I have no motivation and incentive to encourage people from business to come in because of e-declarations,” he said.

Denys Bihus, a Ukrainian investigative journalist and the founder and host of Nashi Groshi (“Our Money”), disagrees.

“It’s manna from heaven,” he said referring to the e-declaration system in a June 7 interview in Washington, DC. Bihus was in Washington to receive a 2017 Democracy Award from the National Endowment for Democracy.

After Bihus’ show recently examined Batkivshchyna’s party finances and found that the many small donors that were listed on paper were not really donors, the National Agency for the Prevention of Corruption looked into the case and sent the violations to the National Police.

Whatever the outcome of the e-declaration disclosure requirements, the issue is likely to be a lightning rod for years to come.